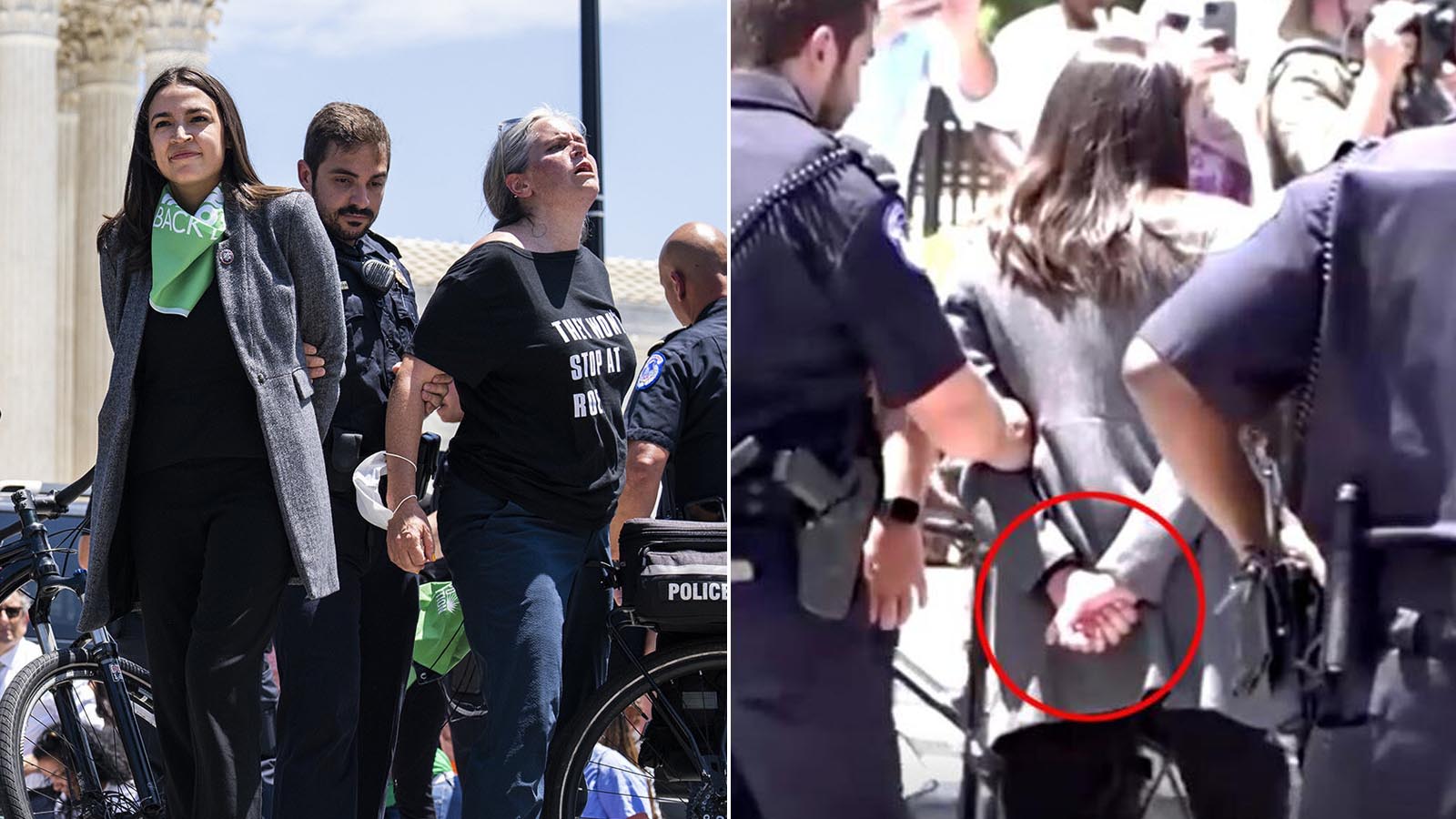 Far-left Rep. Alexandria Ocasio-Cortez was roundly mocked on social media Tuesday after she put her arms behind her back to imitate being handcuffed following her arrest at a pro-abortion demonstration outside the Supreme Court.

The Bronx and Queens Democratic lawmaker was gently escorted away by a Capitol Police officer — along with fellow city Rep. Carolyn Maloney — after blocking traffic outside the court building.

AOC kept up the charade of being restrained for a few steps before raising her fist to supporters watching from the sidewalk. She then crossed her wrists behind her back again in the faux handcuffed position.

The clip spread like wildfire and conservative commentators were quick to chime in.

“AOC pretended to be in handcuffs when she was escorted away from the Supreme Court,” the official account for the conservative paper Washington Free Beacon tweeted.

“Oh my gosh @AOC faking handcuffs,” wrote Republican commentator Matt Whitlock. “This is too much.”

“You guys… @AOC is such a victim that she has to pretend that the big, mean policeman put her in handcuffs…She probably also thinks he wants to date her,” said conservative columnist Tim Young.

“[email protected] is such an expert at getting attention and narrative building that she PRETENDED to be handcuffed just so she could have this image on social media. There are no handcuffs on her lmfaoooo,” tweeted businessman Jason Howerton.

“Note the handcuff pose, abandoned only to raise her fist in the air. The queen of gestures,” Fox News political analyst Brit Hume said.

AOC’s office did not immediately respond to The Post’s request for comment on the incident.

According to Capitol Police, 35 people — including 17 members of Congress — were arrested.

Grainy video of Omar also showed the “Squad” member walking several steps with her hands behind her back as if handcuffed. However, she too raised her right arm in a clenched-fist salute without any difficulty.

Following their arrests, the lawmakers were taken to a grassy area between the Supreme Court and Capitol building. Once there, police asked the representatives to pose with their congressional IDs in lieu of a mugshot.

One Capitol Police officer was seen telling the members that water was on the way as they relaxed.

Several lawmakers, including Maloney, Ocasio-Cortez, Bush, and Levin took the opportunity to give interviews with members of the media.

The initial group of lawmakers and activists were released from custody at approximately 2:30 p.m., Jennifer Shutt with the States Newsroom reported— adding that Dean said they were charged with “crowding, obstructing or incommoding and need to pay a $50 fine.”