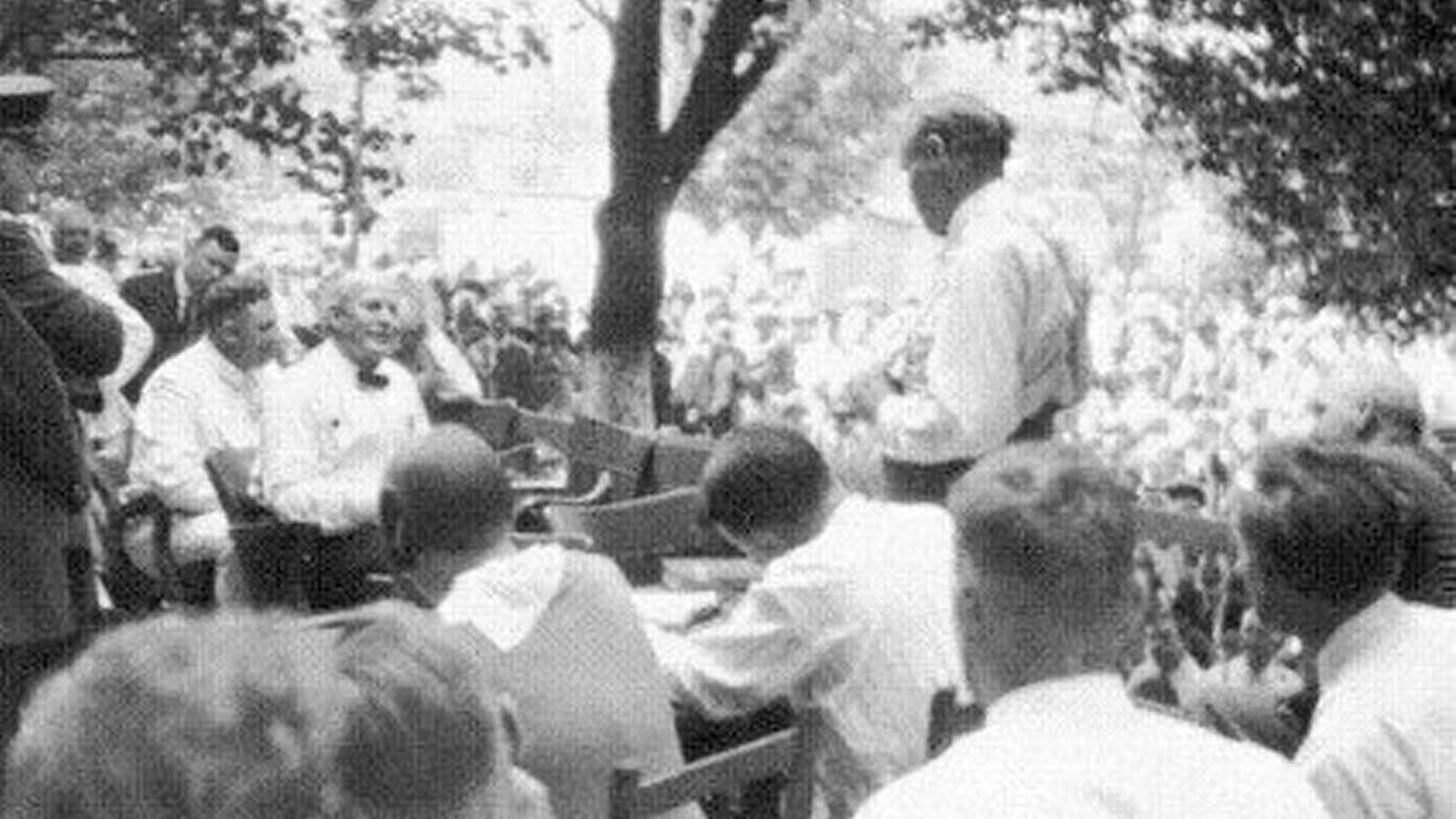 The legendary confrontation between William Jennings Bryan and Clarence Darrow in the Scopes Monkey Trial took place on a hot Monday afternoon on July 20, 1925. But the real clash of these cultural titans didn’t exactly match what was later popularized in movies and theater.

The Broadway play “Inherit the Wind” and two later films stated that they were loosely based on the trial about teaching evolution in public schools, and the banter between Bryan and Darrow in 1925 during the legal proceedings.

But many facts and events in “Inherit the Wind” were adapted to make good theater, to the point that playwrights Jerome Lawrence and Robert E. Lee wanted it made clear that their play shouldn’t be taught as literal history.

“Inherit the Wind is not history. . . . Only a handful of phrases have been taken from the real transcript of the famous Scopes Trial,” they said in the written preface to the play. “Some of the characters of the play are related to the colorful figures in that battle of giants; but they have life and language of their own—and, therefore, names of their own. . . . Inherit the Wind does not pretend to be journalism. It is theatre.”

Here are some important facts about the real-life Scopes Trial, and the key events that may – or may not – have appeared in “Inherit the Wind.”

1. The characters of Brady and Drummond in the play were based loosely on Bryan and Darrow, with important differences. In real-life, Bryan was fairly well-studied in evolution and Darrow had a harsher character than as portrayed in the play and film.

2. The core message of the play “Inherit the Wind” was about McCarthyism and not the battle over evolution in the classroom. Authors Lawrence and Lee focused on anti-communist investigationswith one of the play’s most dramatic moments being based on an outburst by Senator Joseph McCarthy in Congress. Yet, the real event was much more concerned with how to address the teaching of science and religion

3. The plan to put Bryan on the witness stand to talk about creationism was well-calculated. The fictionalized version portrays the Drummond/Darrow character coming up with the idea on the spur of the moment. In reality, the defense team rehearsed the tactic.

4. The line of questioning offered by Darrow wasn’t new. Two years earlier, Darrow had written a newspaper article posing many of the same questions about the Bible to Bryan.

5. The witness interrogation went on for about two hours – outside of the courthouse. In the play/movie, the dramatic scene between the two actors is inside a steaming hot courtroom. In reality, the judge moved the trial that day outside to a courtyard because of the heat and fears about the structural safety of the courthouse.

6. Bryan more than held his own in the testimony. Unlike the fictional version, where the Brady/Bryan character is dogged by the Drummond/Darrow character, the court transcripts show a fairly even exchange.

7. The entire trial was broadcast live in 1925, but there is no recording. WGN paid $1,000 a day to run a cable from Tennessee to Chicago to broadcast the trial over the radio. But the technology didn’t exist to record the proceedings.

8. It was more than just Bryan and Darrow involved in the exchange. The transcripts show other attorneys involved in the argument for the two-hour period. At one point, Darrow’s co-counsel Dudley Field Malone was involved. Malone was an important figure on the defense team who was overshadowed by Darrow.

9. Bryan had a chance to reverse the roles on the stand. On the following day, Darrow asked the court to send the case to the jury so that the trial could end. One possible reason was that there were safety concerns for the two legal teams. But if the trial had continued, Bryan had the chance to put Darrow on the stand to answer his questions.

10. Bryan’s testimony was never accepted in the court record. There are transcripts of what happened on July 20, 1925, but at the start of the two-hour exchange, it seemed like Judge John T. Raulston wasn’t going to allow the jury to consider it. On the trial’s final day, he ordered it expunged from the case.

Eventually, the Supreme Court settled many of the issues about the Scopes case in 1968, in a decision called Epperson v. Arkansas. A unanimous Court ruled on the legality of a 1928 Arkansas law that barred teachers in public or state- supported schools from teaching, or using textbooks that discussed human evolution.

A teacher in Little Rock, Arkansas had been given textbooks from her administration that taught evolution, and she sought out court guidance about her situation.

Justice Abe Fortas, writing the main opinion in the decision, spoke for seven Justices in stating that the Arkansas law violated the First Amendment’s Establishment Clause.

“The State’s undoubted right to prescribe the curriculum for its public schools does not carry with it the right to prohibit, on pain of criminal penalty, the teaching of a scientific theory or doctrine where that prohibition is based upon reasons that violate the First Amendment,” Fortas said.