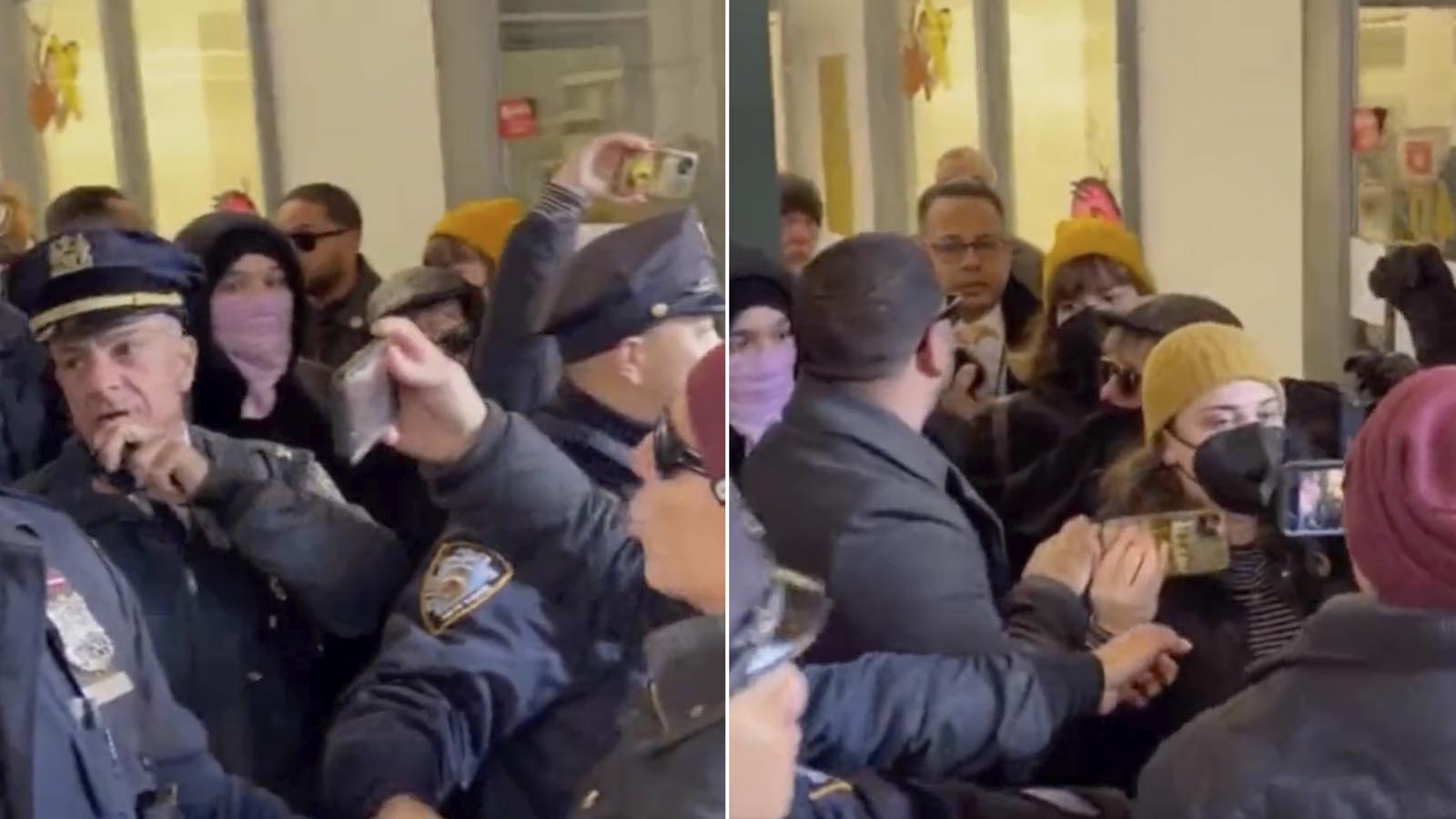 Police had to step between two groups of people outside of a New York City public library that was hosting a “Drag Queen Story Hour” for children on Saturday, with video footage showing left-wing trans activists and Antifa clashing with protesters.

Video captured by NJEG Media shows masked and hooded individuals standing in front of the doors to Andrew Heiskell Library for the Blind, located on 20th St between 5th and 6th Ave, blocking the path of protestors. The group protesting the drag queen story hour appeared to have been led by an individual identified as Juliette Germanotta, a “transgender reverend,” reported the NYC video journalist.

"SHUT IT DOWN": Protestors and Antifa clash outside a Drag Queen Story Hour event in New York City.

Almost immediately, the altercation was interrupted by NYPD officers who jumped in between the two groups. Although several officers were present, they still struggled to keep scuffles from breaking out.

“F*ck Antifa!,” the protestors could be heard chanting. “Leave the kids alone!”

They were also spotted carrying signs with messages such as “STOP GROOMING KIDS FOR SEX,” and “STOP INDOCTRINATION. GOD CREATED MAN & WOMAN.”

“I’m a transgender. I transitioned at a very young age, which I do regret that part. But there’s no way I would condone or support grooming of little children… let little kids be little kids,” Germanotta said to NJEG Media.

While the left-wingers formed a human chain to protect the drag performance inside, the protestors held hands and prayed.

“Protect them! Please let these demons go away into the darkness back where they belong,” a woman leading the prayer said.

At multiple points in the ongoing protest, police officers had to step in between smaller clusters of individuals as things got heated and shoving matches broke out.

“Shame! Shame!,” protesters could be heard yelling at the LGBTQ+ activists.

The protests went on for the entire duration of the story hour, and lasted as police escorted drag performers and attendees off of the premises. They were followed by some protestors who were adamant about continuing their message.

No arrests have been made, said left-wing reporter Talia Jane — who was the target of one of the protestor’s signs.

New York Public Libraries denounced the protest, saying “Our patrons enjoy Drag Story Hour, and the Library will continue to offer programs that support a diverse array of voices. This is particularly important at this moment when we are seeing a rise of hate and violence targeting LGBTQ+ communities.”

“Our patrons enjoy Drag Story Hour, and the Library will continue to offer programs that support a diverse array of voices. This is particularly important at this moment when we are seeing a rise of hate and violence targeting LGBTQ+ communities.” pic.twitter.com/qu0aKcmgSG

On Drag Queen Story Hour’s website, the group boasts of “capturing the imagination and play of the gender fluidity of childhood” and giving kids “glamorous, positive, and unabashedly queer role models.”

Last week, another NYC public library drag queen incident led to a man being arrested for assault on a police officer in Manhattan.

A man was arrested for assaulting a police officer at New York Public Library in Manhattan during a protest after a heated argument with protesters over Drag Story Hour #news #nypd #nyc #Police pic.twitter.com/THSruI27l1