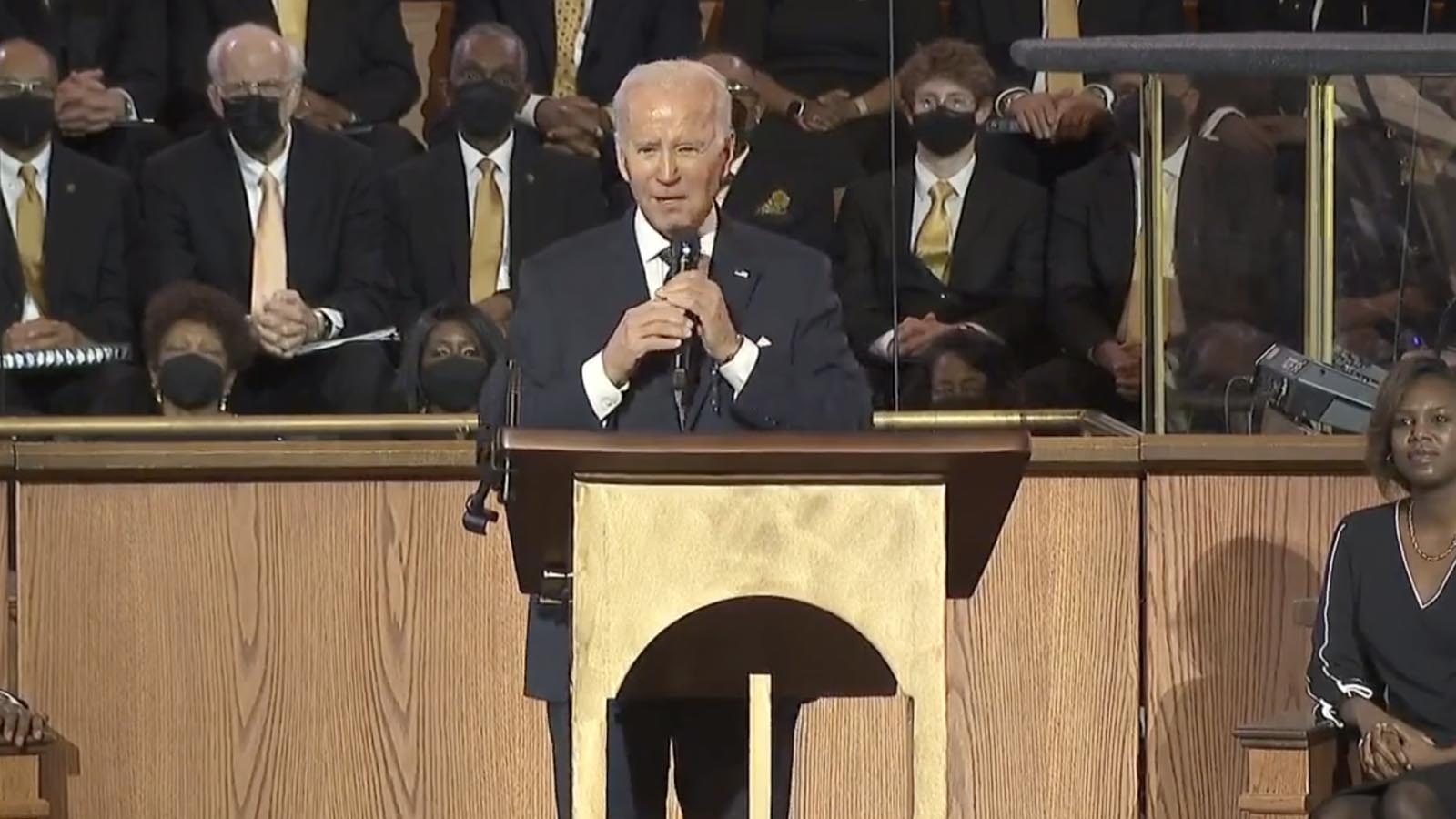 Ebenezer Baptist Church is the church that MLK used to preach at. But now, Sen. Raphael Warnock is the pastor and the church was embroiled in a rent scandal during the midterm campaign. But that didn’t stop Biden from going.

Biden gave remarks honoring MLK, but Biden being Biden, he wasn’t able to speak without lying to his audience.

He had a largely black audience, so, naturally, he pulled out his old lie about being involved in the “civil rights movement.”

While at Ebenezer Baptist Church, Joe Biden once again claims he was a civil rights activist: “When I started off as a 22-year-old kid on the east side in the civil rights movement.”

This is a debunked lie. pic.twitter.com/CY6x07IN2N

Biden spoke about “when I started off as a 22-year-old kid on the east side in the civil rights movement.”

Let’s hear that debunked by…Joe Biden, circa 1987 after he was first caught in that lie, more than 35 years ago.

This wasn’t the time and place to pump himself up with a political speech, much less to lie about himself.

But Biden didn’t leave it there, he gilded the lily a bit more, claiming that he used to go to the “black church” after he went to Catholic mass in the morning, every morning.

BIDEN: "I used to go to 7:30 mass every morning in high school and then in college, before I went to the Black church. Not a joke."

Does anyone truly believe that? Congregants don’t remember Biden being there as a teen. Big surprise. Every time he says “not a joke,” you know you should doubt the veracity of what comes next.

This is just the latest “embellishment” of his background that we’ve seen in the story of Joe Biden being the kindest, most open person ever. He lied about being arrested trying to visit Nelson Mandela. He lied about being raised in the Puerto Rican community of Delaware. He claimed he probably “went to shul” more than many of the Jews in the audience. This is truly cringeworthy.

"I got raised in the black church."

"I got my education…in the black church."

"I probably went to shul more than many of you did."

"I was sort of raised in the Puerto Rican community at home, politically." pic.twitter.com/wtBhjDdIlM

Democrats talk about Rep. George Santos (R-NY) but Santos isn’t in the most important office in the country. Democrats and Republicans have called out Santos’ lies. But Democrats have defended Biden at every turn and have not held him accountable for his continuous lies.

Biden also managed to make a rather severe gaffe during his remarks at the church, by butchering the name of Supreme Court Justice Ketanji Brown Jackson, calling her “Kejanji – Ketanji Drown Jackson.”

BIDEN: "Those are the words of Kejan— Kejan— Ketanji Drown Jackson, our Supreme Court justice." pic.twitter.com/Fbhk0pffsY

Check out the woman on his left furiously shaking her head. She isn’t going along with that butchering. You would think that Biden could get her name straight, he did nominate her.

But then talk about completely inappropriate — Biden appeared to pick out what sounded like a young girl in the audience from the podium and asked if he could take a picture with her before he left.

"What's your name, honey? It's good to see you. Maybe I can have a picture with you before I leave, ok? Is that all right" – @POTUS delivering remarks at Ebenezer Baptist Church ahead of #MLKDay2023. pic.twitter.com/SGb5vMb2Y4

Yikes. You’re there to deliver remarks honoring MLK, not to creep on young girls. What the heck was he doing there? It’s not clear exactly who he was talking to but there were multiple little girls in the direction he was looking.

Please, whoever has any control over him in the White House, even if you fail at everything else, get this part of him under control.