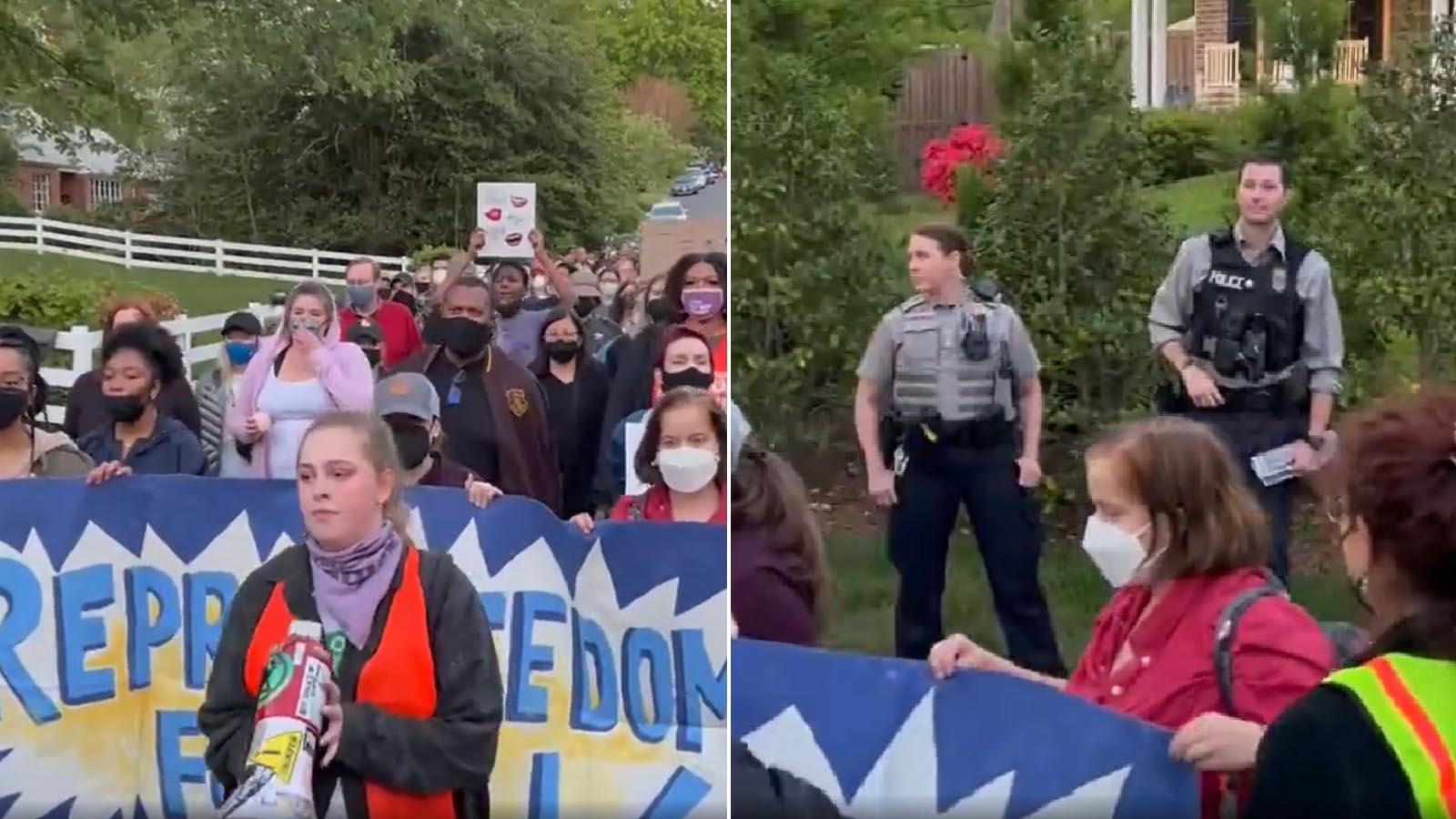 On Monday evening, the radical activist group known as “Shut Down DC” — known best for twerking for climate justice and forming human blockades on busy thoroughfares and interstates in the nation’s capital — had planned a protest of Justice Samuel Alito’s home in a Virginia suburb of Washington.

As explained on their website, Shut Down DC billed the event as “a vigil” for the rights they claim Justice Alito’s draft opinion — leaked in a shocking turn of events one week ago in the pages of Politico — would eliminate. Among those rights that SDDC *falsely* claimed Alito’s draft opinion would void were “contraception, same-sex marriage, protections for LGBTQ folks, and even interracial marriage.” Again, none of these claims are true, but in the woke left’s version of reality, anything goes.

Complaining that “it’s been impossible to reach [Alito] at the Supreme Court (especially now with the enormous fences),” SDDC planned to “do it at his home.”

At the foot of his driveway, on the public street, we will light candles and speakers will share their testimony. We will hold a moment of silence for the rights we know are ours, then walk back together to the meeting location

“Let’s show up in numbers,” the call for activists added.

Townhall’s Julio Rosas was on the scene Monday night and what he witnessed was…not exactly a bold display of unity or a moving vigil. Instead, he found a forlorn group of defeated-looking libs staggering up like zombies.

This is the moment when pro-abortion protesters arrived at Alito’s home. pic.twitter.com/Xs8vdZEDpS

The slow swaying march of fewer than 100 leftists, guided down the quiet neighborhood street by what look like crossing guards in the Shut Down DC group, didn’t seem too lively as organizers directed participants where to stand with their banner reading “REPRO FREEDOM FOR ALL!”

As Julio noted on Twitter from the “vigil,” it didn’t even appear that anyone was around at Justice Alito’s home, save for a few police officers.

Pro-abortion protesters have made it to what they say is Justice Alito’s home in Virginia. Police are here. Looks like no one is home. Protesters are chanting “Keep abortion safe and legal!” pic.twitter.com/JbhTSNcaIO

Following their little vigil-circle that lasted little more than 20 minutes, protestors began to move out at which point the typical unhinged anger of the group bubbled over. “F–k you, Alito!” several shouted. “How dare you?” screamed others. “Abort the court!” they continued. “F–k these fascists!” said the leftists assembled to harass a Supreme Court Justice.

Pro-abortion protesters shout “Fuck you, Alito” and “abort the court” as they leave his house. pic.twitter.com/g5dnB7TcIm

Before they departed, the defeated-looking but profane libs left candles burning in the street in front of Justice Alito’s home because what’s a leftist protest without some fire and leaving trash behind.

As Katie reported earlier on Monday, the White House and President Biden have…struggled…to figure out how to talk about those who target Supreme Court Justices and pro-life individuals. As Katie wrote, Psaki “justified protests outside of personal homes by noting Supreme Court justices have not yet been hit with violence or vandalism.” The White House’s continued refusal to condemn the protests targeting Justices’ homes — an action that is illegal in Virginia — has put Biden in an uncomfortable position that Psaki is trying to clean up.

On Monday morning, and on the heels of reports that pro-abortion activists had allegedly firebombed a pro-life organization in Wisconsin, Psaki tried to clarify that the White House only supports “peaceful” protests. Her scrambling to set the record straight follows her briefing last week that wrote off protests and harassment as merely “passionate” people who are concerned about the looming potential that Roe v. Wade would be overturned.