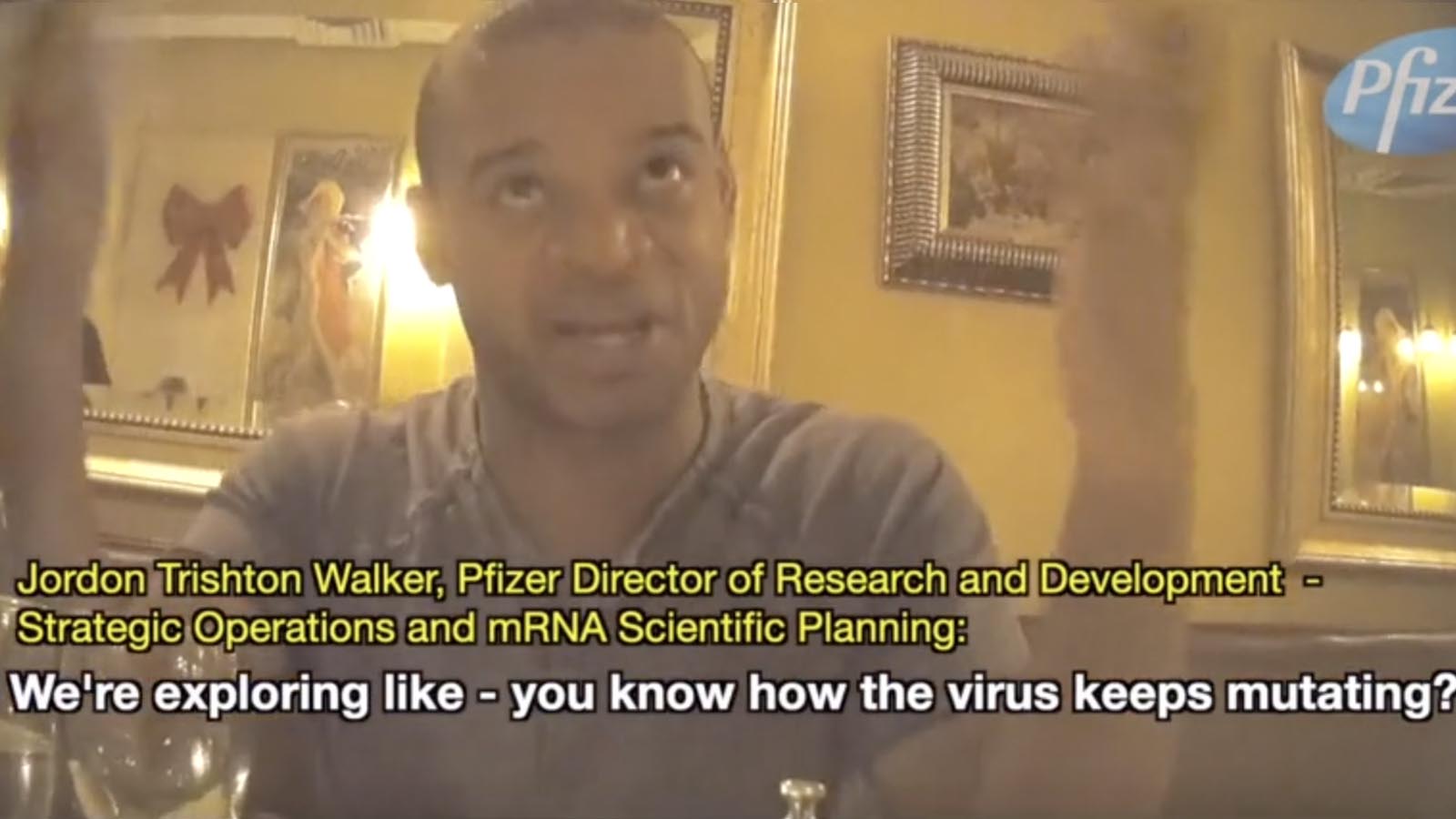 Project Veritas released a new video today exposing a Pfizer executive, Jordon Trishton Walker, who claims that his company is exploring a way to “mutate” COVID via “Directed Evolution” to preempt the development of future vaccines.

Walker says that Directed Evolution is different than Gain-of-Function, which is defined as “a mutation that confers new or enhanced activity on a protein.” In other words, it means that a virus such as COVID can become more potent depending on the mutation / scientific experiment performed on it.

The Pfizer executive told a Veritas journalist about his company’s plan for COVID vaccines, while acknowledging that people would not like this information if it went public.

“One of the things we [Pfizer] are exploring is like, why don’t we just mutate it [COVID] ourselves so we could create — preemptively develop new vaccines, right? So, we have to do that. If we’re gonna do that though, there’s a risk of like, as you could imagine — no one wants to be having a pharma company mutating f**king viruses,” Walker said.

“From what I’ve heard is they [Pfizer scientists] are optimizing it [COVID mutation process], but they’re going slow because everyone is very cautious — obviously they don’t want to accelerate it too much. I think they are also just trying to do it as an exploratory thing because you obviously don’t want to advertise that you are figuring out future mutations,” he said.

“Don’t tell anyone. Promise you won’t tell anyone. The way it [the experiment] would work is that we put the virus in monkeys, and we successively cause them to keep infecting each other, and we collect serial samples from them.”

Walker drew parallels between this current Pfizer project and what may have happened at the Wuhan Institute of Virology in China.

“You have to be very controlled to make sure that this virus [COVID] that you mutate doesn’t create something that just goes everywhere. Which, I suspect, is the way that the virus started in Wuhan, to be honest. It makes no sense that this virus popped out of nowhere. It’s bullsh*t,” he said.

“You’re not supposed to do Gain-of-Function research with viruses. Regularly not. We can do these selected structure mutations to make them more potent. There is research ongoing about that. I don’t know how that is going to work. There better not be any more outbreaks because Jesus Christ,” he said.

Walker also told the Veritas journalist that COVID has been instrumental for Pfizer’s recent business success:

Walker:Part of what they [Pfizer scientists] want to do is, to some extent, to try to figure out, you know, how there are all these new strains and variants that just pop up. So, it’s like trying to catch them before they pop up and we can develop a vaccine prophylactically, like, for new variants. So, that’s why they like, do it controlled in a lab, where they say this is a new epitope, and so if it comes out later on in the public, we already have a vaccine working.

Veritas Journalist:Oh my God. That’s perfect. Isn’t that the best business model though? Just control nature before nature even happens itself? Right?

Veritas Journalist:What do you mean if it works?

Veritas Journalist:Well, I think the whole research of the viruses and mutating it, like, would be the ultimate cash cow.

Walker went on to explain how Big Pharma and government officials, such as at the Food & Drug Administration [FDA], have mutual interests, and how that is not in the best interest of the American people:

Walker:[Big Pharma] is a revolving door for all government officials.

Walker:In any industry though. So, in the pharma industry, all the people who review our drugs — eventually most of them will come work for pharma companies. And in the military, defense government officials eventually work for defense companies afterwards.

Veritas Journalist:How do you feel about that revolving door?

Walker:It’s pretty good for the industry to be honest. It’s bad for everybody else in America.

Veritas Journalist:Why is it bad for everybody else?

Walker:Because when the regulators reviewing our drugs know that once they stop regulating, they are going to work for the company, they are not going to be as hard towards the company that’s going to give them a job.