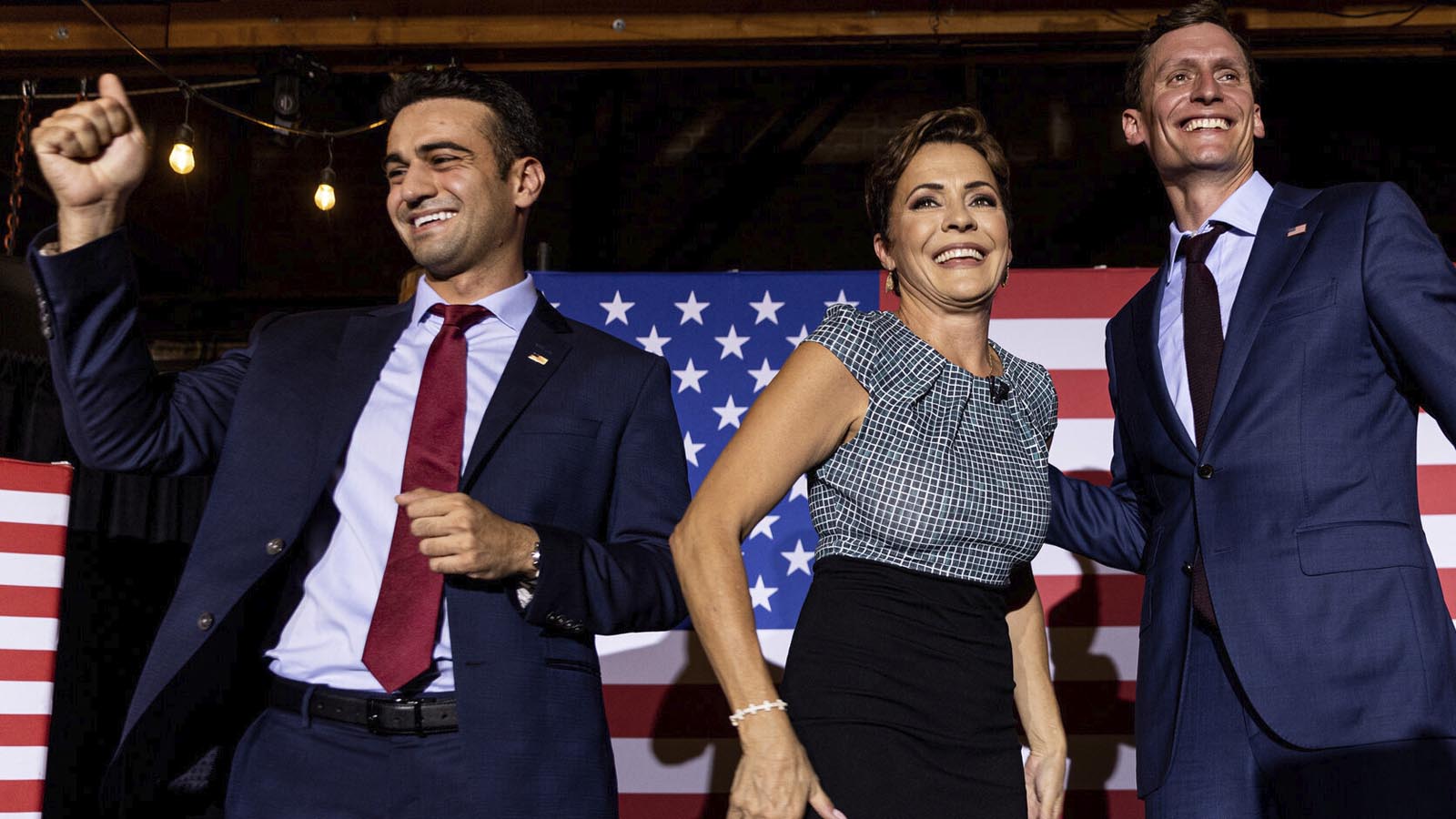 Arizona Republican candidates Abe Hamadeh and Kari Lake have launched new legal maneuvers to contest the November election as the state’s largest county gave its most detailed explanation to date on why it did not count more than 4,800 provisional ballots cast two months ago.

Hamadeh, the GOP’s attorney general nominee. on Tuesday filed a motion for a new trial after a Mohave County Superior Court judge dismissed his and the Republican National Committee’s election challenge just before Christmas. 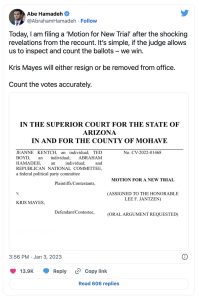 While Hamedeh lost Dec. 23, he forced into public new evidence of voting problems in Pinal County that even Arizona’s new Democrat secretary of state concedes was troubling. That new evidence is one focus of his request for a new trial.

“Today, I am filing a ‘Motion for New Trial’ after the shocking revelations from the recount,” Hamadeh tweeted Tuesday. “It’s simple, if the judge allows us to inspect and count the ballots – we win. Kris Mayes will either resign or be removed from office. Count the votes accurately.”

During Hamadeh’s lawsuit, vote total discrepancies in Pinal County were not brought to the attention of the judge, nor Hamadeh’s legal team, the attorney general candidate alleges.

Regarding the vote count discrepancy, Hamadeh told Turning Point USA President Charlie Kirk on The Charlie Kirk Show, that the judge in his case “was pushed around by the secretary of state, Katie Hobbs’, and Kris Mayes’ legal teams. That’s what I mean when I say I give Democrats credit. They intimidated this judge. They basically withheld information. They snookered him.”

In a Dec. 21 report to then-Secretary of State Katie Hobbs regarding the recount, Pinal County admitted finding a 507-vote variance between the certified election count and the recount. Hamadeh had 392 more votes after the recount, while his Democratic opponent, Attorney General Kris Mayes, had 115 more votes.

Hamadeh initially lost the election by 511 votes, which then dropped to 280 votes after the automatic statewide recount.

Newly sworn-in Arizona Secretary of State Adrian Fontes said in a radio interview on Friday regarding Pinal County’s vote total discrepancy, “You know, the single digit differences are not unusual, but it is absolutely, it’s really problematic to see the number of ballots in Pinal County that were not tabulated.”

“The folks down in Pinal County, particularly the Board of Supervisors and their election director back a year ago did not staff up,” Fontes added. “They did not fund up. They did not train and prepare for what they knew was going to happen.”

On Wednesday, the Pinal County Board of Supervisors had a meeting to discuss the issues with the November election.

Hamadeh also is raising concerns about more than 4,000 provision ballots that were not counted in Maricopa, the state’s largest county.

“There are thousands of uncounted provisionals ballots. Thousands of voters were disenfranchised. Election Day in Maricopa County was a disaster. Election officials failed democracy,” he alleged.

When asked about the uncounted provisional ballots, Maricopa County told Just the News on Tuesday the final total of rejected ballots was 4,849.

“Only eligible, registered voters are allowed to vote in Arizona. After researching each provisional voter’s eligibility in the 2022 General Election, the Maricopa County Recorder’s Office confirmed eligibility for 2,954 voters and those ballots were counted,” the county said in a statement.

Provisional ballots, it added, were not counted for one of five reasons:

2. The voter registered after the deadline provided for in law (1,942)

4. The voter’s early ballot was counted, so the provisional ballot was not counted (65)

5. The voter didn’t provide sufficient ID by the deadline provided for in law (229)”

In another Arizona election lawsuit, meanwhile, GOP gubernatorial nominee Kari Lake has requested that the appeal of her lawsuit bypass the Arizona Court of Appeals and go straight to the Arizona Supreme Court.

“[T]his case is going to eventually make it to the Arizona Supreme Court, no matter what,” Lake told “Just the News, No Noise” TV show Tuesday. “So there’s really nothing to be gained by waiting on taking this to the Supreme Court. They should just, we believe, grant us that request.”

Lake explained that she filed her brief with the Court of Appeals on New Year’s Eve and that possible oral arguments have been scheduled for Jan. 24, but that “there’s really no reason to put this on the appeals court when, no matter what happens, this will end up with the Arizona Supreme Court.”

She added, “The governor is not duly elected right now. Right now, Hobbs has not been duly elected. And this must be resolved as quickly as possible. So we’re asking them for to allow the skipping over the appellate portion of the court system and go directly to them. And we have very strong arguments. We will win on the merits, we will win on the evidence when they take a look at it.”