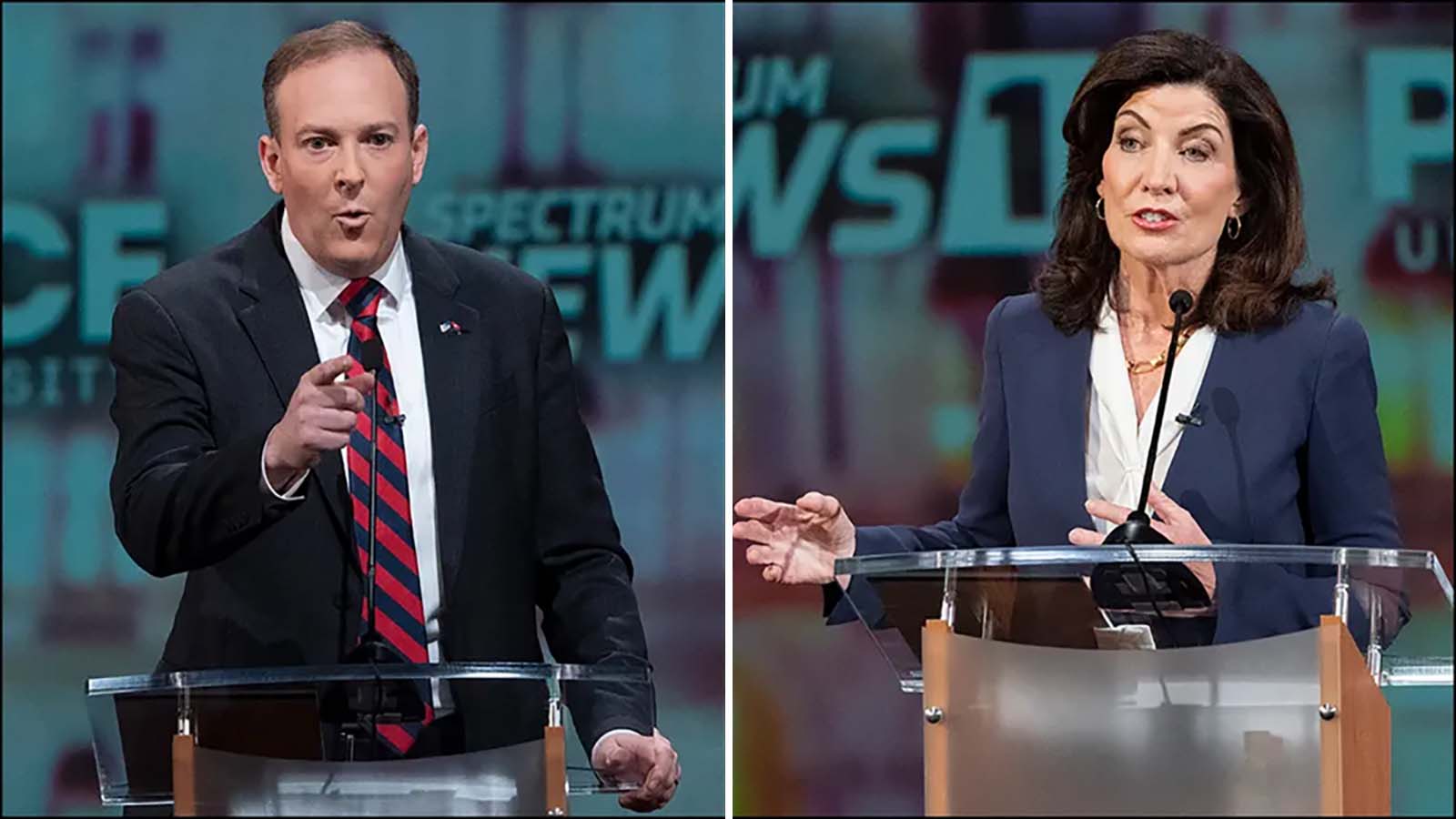 Zeldin started off by claiming “New York is in crisis,” pointing to rising crime and economic woes, which he attributed to the “extreme policies” of his opponent and her predecessors. Hochul touted “middle class tax cuts and property tax rebates” to combat economic hardship but also pointed to her support for abortion rights and gun control before tying her opponent to former President Donald Trump.

Crime and public safety was the first issue the candidates covered. Moderators questioned Zeldin on how he would address crime policy in light of state agency assertions questioning rising crime due to cashless bail. He asserted that he opposed cashless bail and would repeal it. Hochul, meanwhile, pointed to illegal guns and insisted that Zeldin did not want to address that issue, prompting him to retort that people feared a plethora of other crimes that did not involve guns at all.

Moderators then challenged Zeldin to outline how he would follow through on a promise to remove Manhattan District Attorney Alvin Bragg on day one, given that he was an elected official. Zeldin insisted he would follow through and pointed to Bragg’s prosecutorial decisions as a justification. “DA stands for district attorney, not defense attorney,” he said.

Hochul insisted that Zeldin’s promise was emblematic of an attitude that he could overturn elections with which he disagreed, referencing the contested 2020 presidential election. She then pointed to the installation of cameras in the subways and support for mental health care as the best way to combat crime. “I tripled the amount of money to go to law enforcement,” she said. The Republican observed that none of Hochul’s proposals involved imprisoning criminals, prompting Hochul to contrast her support for gun control with Zeldin’s alleged unwillingness to address the issue.

The conversation then turned to inflation and New York’s economic woes. Zeldin said that the state needed to rein in its own spending and work to bring down taxes for residents. He further proposed reversing Albany’s ban on natural gas extraction to boost the economy, before observing that New York was leading the nation in population loss. “New York is gonna be back open for business, baby, Jan. 1,” he asserted.

Hochul then pointed to tax cuts she passed and the suspension of the gas tax amid rising energy costs before touting an effort to improve housing affordability. She then labelled Zeldin both an “election denier” and a “climate change denier.”

On housing affordability, moderators queried Zeldin on his own plan to address the issue. The Republican said expediting the approval process for companies seeking to invest in New York would improve the situation. “In Kathy Hochul’s New York, you can either have your first kid in the basement of mom and dad’s house” or move to another state, he said.

Zeldin’s campaign has put up a strong challenge in deep-blue New York. The Republican has made crime a pivotal focus of his campaign, a message bolstered by an attack on his person while campaigning and the would-be assailant’s prompt release from custody. He was later arrested on federal charges.

Hochul, meanwhile, became governor following the resignation of Andrew Cuomo, who was facing both sexual misconduct allegations and public scrutiny over his decision to quarantine coronavirus patients in nursing homes.

The race is unusually close in a state that has had only one Republican governor since 1975, with some polls showing Zeldin ahead of his Democratic rival. The RealClearPolitics polling average shows Hochul with an overall 6.1% lead.