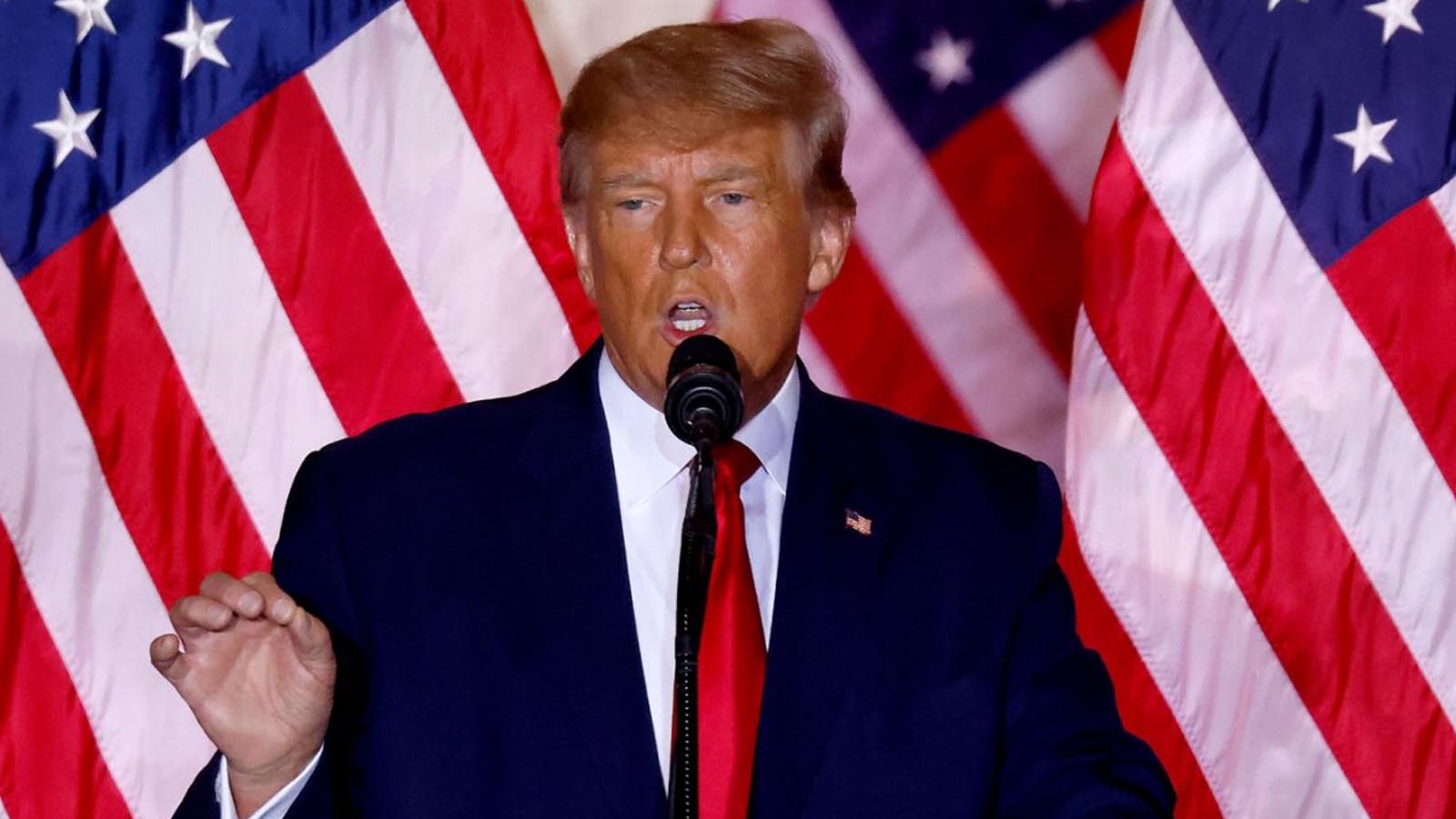 Former President Donald Trump has been seething on his Truth Social account as a third batch of classified files from Joe Biden’s Vice Presidency are found at his Delaware home.

Critics have been quick to compare the situation to the FBI raid at Trump’s Mar-a-Lago estate, where authorities sought to collect classified materials after his lawyers falsely claimed that he had returned all the documents in response to a grand jury subpoena.

Trump is seen to argue that Biden keeping classified documents is much worse than what he did saying Mar-A-Lago is ‘essentially an armed fort.’

In his latest online posts, the former U.S. President slams the FBI and DOJ for targeting him over classified files while going easy on ‘hopeless Joe’ as he warns that the ‘country is in serious trouble.’

‘What Biden did was wrong, but he was given a reasonable and stable Special Counsel who is sane, inclined not to make waves, friendly with RINOs (republicans in name only), and is not known as a flame-throwing lunatic or a Biden hater,’ Trump said.

‘What I did was RIGHT, secured documents in a secured place, lock on the doors, guards and Secret Service all around, security cameras working.

‘Mar-a-Lago is essentially an armed fort, and was built that way in the 1920’s, with High Walls & structure to serve as the Southern W.H.’

Trump argued that Biden keeping classified documents is worse as they date back to when he was vice president, whereas Trump’s position was higher as president.

‘I was President of the U.S. and covered and protected by the Presidential Records Act, which is not criminal and allows and encourages you to talk to the NARA, which we were, very nicely, until the FBI, who it is now learned has been after me for years without pause or question, RAIDED Mar-a-Lago,’ he said.

‘A stupid and probably Illegal thing to do. As President, I have the right to declassify documents, Biden did not. Special ‘Prosecutor’ Jack Smith, however, is a Trump Hating political Thug.’

Trump has repeatedly claimed that he secretly declassified the documents he took home but that claim has been refuted by former senior officials and his lawyers have not made similar claims in court.

‘The Boxes Hoax Case against me should be dropped immediately. I have done nothing wrong!’ he finishes.

As the day wears on Trump is seen taking a swipe at the prosecution between both cases describing them as ‘sick thugs.’

‘How come the Biden ‘Prosecutor’ is a nice guy, very friendly with Democrats and RINOs alike, close to Christopher Wray, & pretty much liked & known by everybody, while my ‘Prosecutor’ is a Radical Left Trump HATING Lunatic, whose wife & family get a perfect ’10’ for spewing Trump HATE, & whose ‘friends’ are the most evil, angry, & disgusting Marxists & Communists in & around Government?’

‘They are GRILLING innocent people in Grand Juries for hours, all to ‘get Trump.’ These are Sick Thugs!’

Trump goes on to claim that the FBI are ‘CROOKED, CORRUPT and BROKEN’ in capital letters sending a stern warning to Americans that the country is in ‘serious trouble.’

‘THIS HAS BEEN GOING ON AGAINST ME FOR YEARS. THE FBI & THE DEPARTMENT OF INJUSTICE ARE CROOKED, CORRUPT, & BROKEN,’ he wrote with apparent ferocity.

‘(Just look at the Lunatic Radical Left Prosecutor they gave me, but not Hopeless Joe, Twitter Files & the RIGGED 2020 Presidential Election, the Russia, Russia, Russia HOAX, & all the rest!).

‘OUR COUNTRY IS IN SERIOUS TROUBLE, NO BORDERS, NO VOTER I.D., NO ENERGY INDEPENDENCE. THE REPUBLICAN PARTY HAS NOT BEEN SMART & TOUGH, BUT MAYBE THEY WILL BE NOW. GOOD LUCK AMERICA!!!’

Biden’s attorneys announced finding the third batch of classified documents on Saturday, stating that they found five additional pages that were marked classified inside his home on Thursday evening.

It brings the total to six classified documents to have been found at Biden’s home in Delaware, as the first one was found in the garage.

The grand total of classified documents from Biden’s days as vice president are now up to two dozen.

His personal attorneys discovered the documents in the room adjacent to the garage, but did not have clearance to view them, so they had to call in Richard Sauber, special counsel to the president.

‘Because I have a security clearance, I went to Wilmington Thursday evening to facilitate providing the document the President’s personal counsel found on Wednesday to the Justice Department,’ Sauber said, according to Fox News.

‘While I was transferring it to the DOJ officials who accompanied me, five additional pages with classification markings were discovered among the material with it, for a total of six pages. The DOJ officials with me immediately took possession of them.

‘The President’s lawyers have acted immediately and voluntarily to provide the Penn Biden documents to the Archives and the Wilmington documents to DOJ,’ he said.

Biden’s personal lawyer, Robert Bauer, defended the delay in releasing the information, saying the president’s legal team ‘have attempted to balance the importance of public transparency where appropriate with the established norms and limitations necessary to protect the investigation’s integrity.’

‘These considerations require avoiding the public release of detail relevant to the investigation while it is ongoing,’ he said in a statement.

The latest discovery comes just days after two other sets were found. The first set of sensitive files were found at a DC office for his think tank and as the Biden administration dodged questions on whether they were tracking down any other records.

Republican lawmakers did not take lightly to the revelations on Saturday.

‘Wait, I thought the WH said on Thursday the search was complete and there were no more docs,’ Josh Hawley wrote on Twitter on Saturday.

Marsha Blackburn jumped in as well, writing: ‘Another batch of classified documents has been located at Biden’s private residence. They keep coming.’

Senator Rick Scott wrote: ‘Either @JoeBiden is an absolute hypocrite or completely clueless. Probably both. We need to get to the bottom of this. How long has he had these…6+ years? Time for accountability.’

Senator John Kennedy called out what he claimed was multiple problems within the current administration and called for accountability, writing: ‘Just like the #BidenBorderCrisis, the Biden classified documents story is too big for the mainstream media to ignore—and the American people want answers.’

Earlier in the week, it was reported that in November 2022, attorneys for the president discovered documents at his former office in the Penn-Biden Center in Washington DC, which he used after his time as vice president.

The documents were discovered in a locked closet while the lawyers were cleaning out the office to move out.

The White House acknowledged that Biden’s attorneys had found 10 documents with classified markings at an old office at a Washington DC think tank, the president has been peppered with questions about the discovery.

The classified documents that appeared to be from the Obama administration were found on November 2 – before the midterm elections – though news of the documents did not come out until months later.