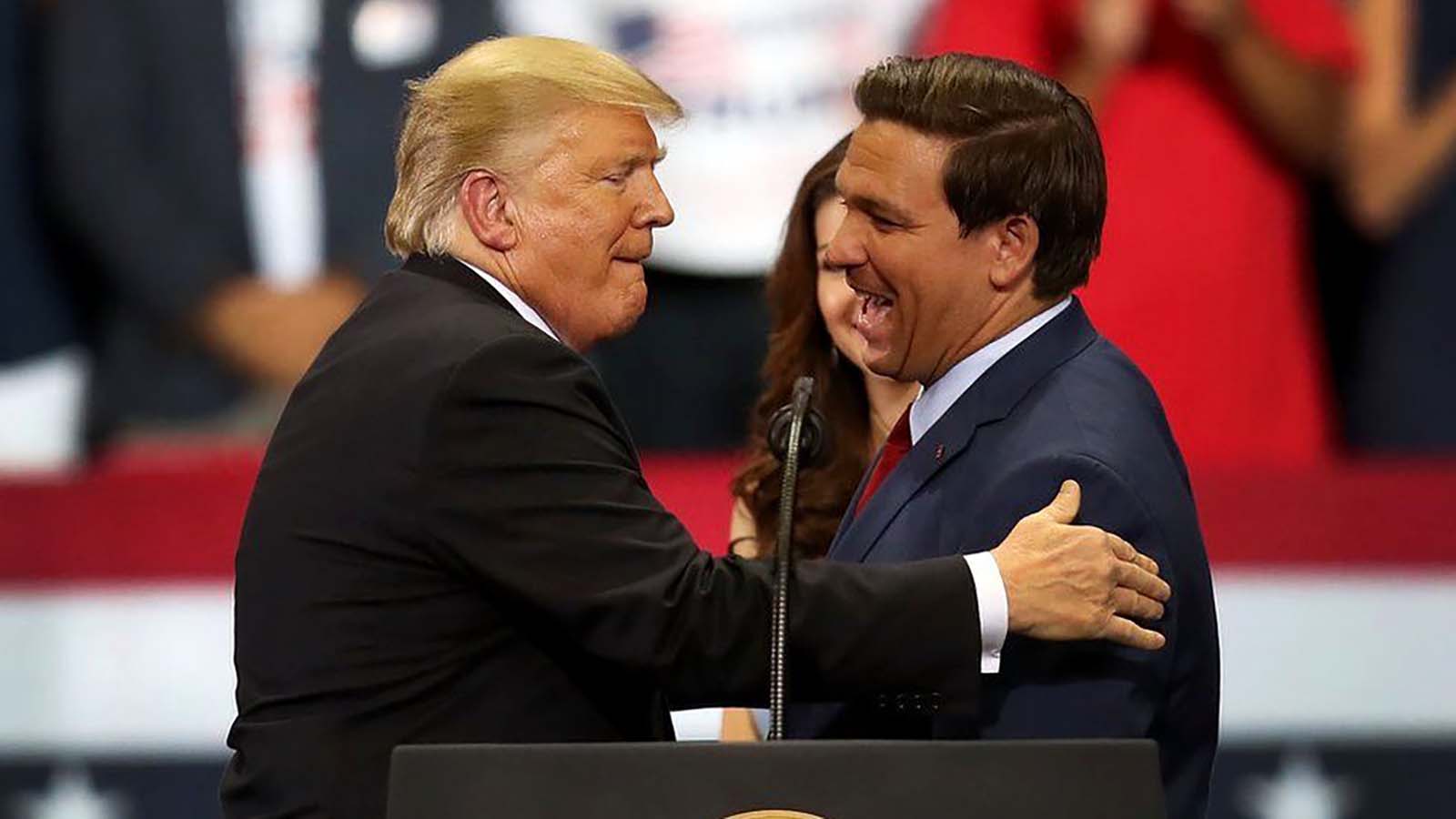 On Thursday night, with midterm races still yet to be called in key states that will determine the balance of power in Congress, former President Donald Trump issued a statement targeting Florida Governor Ron DeSantis who walloped Democrat Charlie Crist in one of the few clear GOP victories of what was supposed to be a national “red wave” night in repudiation of President Biden’s agenda.

Trump’s lengthy statement began by using his new nickname for DeSantis — for whom he voted in Florida this week — “DeSanctimonious,” and called him “an average REPUBLICAN Governor with great Public Relations” who “has the advantage of SUNSHINE.” Trump also claimed “people from badly run States up North would go [to Florida] no matter who the Governor was, just like I did.”

The 45th president continued his attack on DeSantis by claiming the popular governor’s first campaign had “completely fallen apart” before Trump stepped in to endorse him, hold rallies on his behalf, and “fixed” his campaign while stopping the “election from being stolen.” Trump’s accusatory statement continued, saying “Ron DeSanctimonious is playing games!” by answering questions about a Trump 2024 run by saying he was focused on his now-wildly successful gubernatorial race and leading Florida. According to Trump, “in terms of loyalty and class, that’s really not the right answer.”

Trump’s statement, while on par with his usual rhetoric that’s normally used against centrist, squishy Republicans and not red state conservatives, drew an outsized amount of criticism from Republicans and conservatives for attacking DeSantis, let alone while the governor is responding to Hurricane Nicole’s landfall across the Sunshine State.

Like many conservatives, Jesse Kelly was looking forward to a primary fight sharpening the eventual GOP nominee to take on Biden — or whoever Democrats run — in 2024. But now, he’s calling Trump out, saying he’s “going to just embarrass himself and go down in flames” which, as Kelly points out, is a sad development.

I was genuinely excited to see a primary fight between these two. I think that’s what would be best for the country.

But apparently Trump is going to just embarrass himself and go down in flames and I’ll be honest, it saddens me a little. Not how the Trump era should end. https://t.co/CYVIcIsW4i

Others who supported Trump in 2016 and 2020 shared similar disappointment in his decision to start and now escalate a fight with one of Republicans’ brightest examples of what limited conservative government can achieve:

I supported the man twice after never wanting him to get the nomination. He sat in $100 million this cycle to keep for himself. What he is doing now is childish and damaging nobody but him. I am done with Trump after this. Good riddance. https://t.co/NLNdXlg9jS

Our friend Kurt Schlichter didn’t hold back either, pointing out that his recent statements and reaction to the midterms could be seen as “an all out war against his electability.”

Some might argue that Trump is in an all out war against his electability. I mean what the hell was that today? https://t.co/UmaLQlirn7

In the same vein, Byron York noted that Trump’s statements in the last 72 hours seem to be an attempt to inflame most Republicans against him:

'Ron DeSanctimonious' is back. Former President Trump, perhaps worried there are some Republicans he has not yet irritated, attacks Gov. DeSantis again. pic.twitter.com/M4BlyUKlhe

Others, including Allie Stuckey, pointed to the fact that this might not entirely be about Trump’s feelings about DeSantis — again, who Trump voted for on Tuesday — but about the fact that DeSantis is taking attention away from Trump’s big announcement slated for next Tuesday night:

Trump’s statement reads like DeSantis slighted him in some way, but really he’s just upset that *other* people are talking about DeSantis’s presidential potential. https://t.co/BjV3IsOPjJ

As The Hill’s Joe Concha, a Fox News regular, pointed out, Trump’s feud with DeSantis is entirely one-sided and not a great strategy for Trump in the long-term:

And for those who argue that Trump is just fighting back against DeSantis, point to any public statement of DeSantis saying anything negative about Trump. This is a one-way street on that front and the former president looks small in doing so.

Another friend of Townhall’s, Jim Hanson, noted that Trump and all who care about the future of America should be celebrating what DeSantis and his campaign accomplished in Florida on the gubernatorial, senatorial, and congressional level.

Even Townhall’s own Matt Vespa and Storm Paglia — who’ve been endless defenders of Trump through it all — are fed up with Trump’s midterm response:

Trump is just self-destructing…i hate to use the phrase "move on," but it's a debate we need to have before we're in the thick of 2024 stuff.

This is exactly why you’re bleeding extremely staunch supporters like me Trump. The great Governor has done nothing “sanctimonious” to deserve that super lame nickname, or these lies about his (much better than yours) Covid policies. DeSantis 2024. pic.twitter.com/DzuudYs62Z

With reactions like these, Trump needs to read the room and realize firing inside the tent — especially against the man known in many GOP circles as “America’s Governor” — is not the move in the wake of a midterm cycle in which DeSantis’ victory was one of only a few bright spots.

But, if his escalating statements and posts on Truth Social are any indication, this seems to be the warpath Trump’s now on — and it doesn’t look like those who previously backed him want to be along for the ride.