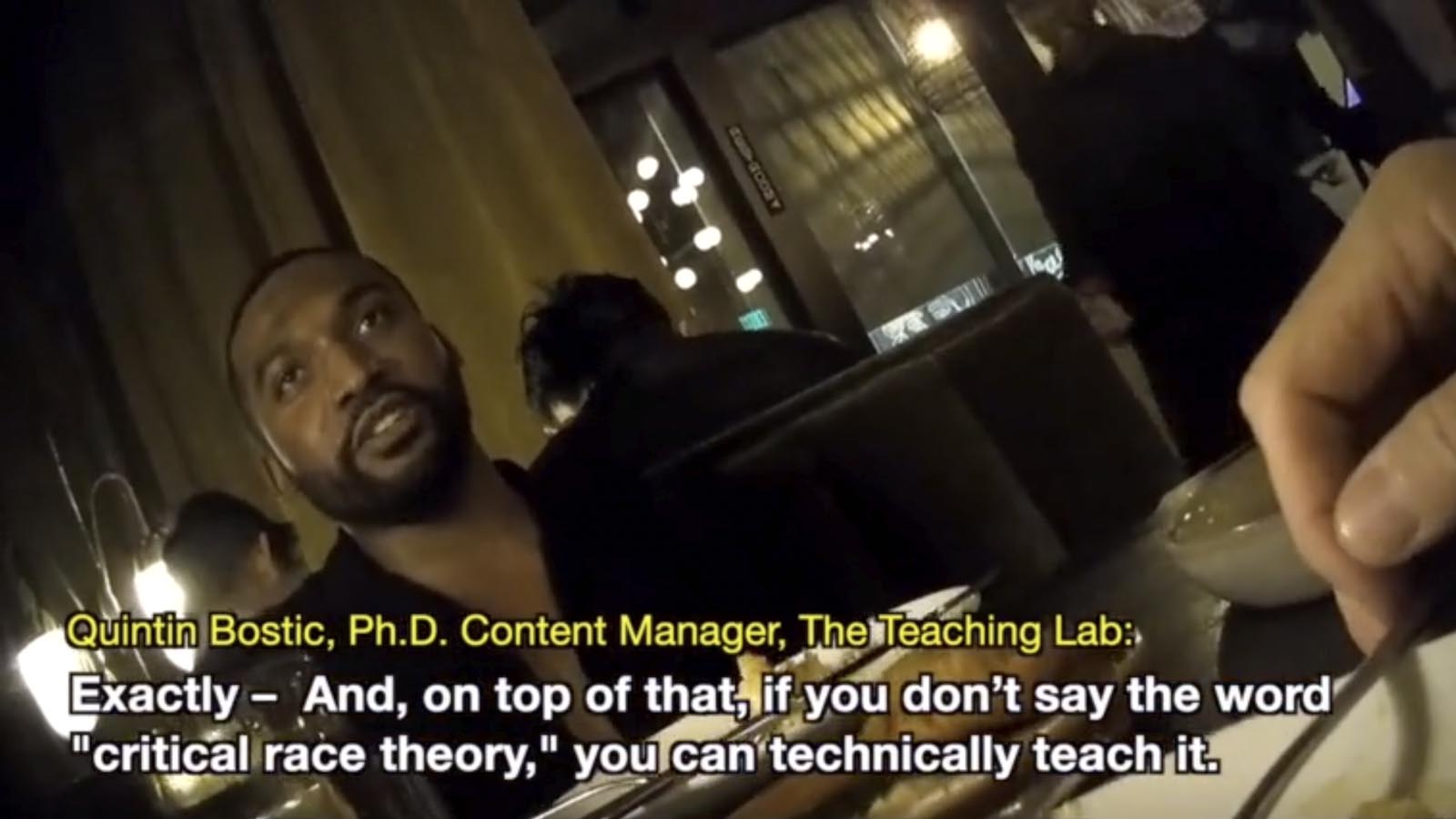 A newly released video from Project Veritas has revealed Teaching Lab Director Dr. Quinton Bostic bragging about violating Georgia’s ban on teaching critical race theory (CRT) in schools through the curriculum he sells to districts in the state.

Project Veritas founder James O’Keefe revealed that Bostic had his teaching license revoked around 2017, when he was a literacy educator. Bostic now works for Teaching Lab as a content manager “with a $15 million budget dedicated to creating more ‘equitable’ curriculums.”

O’Keefe added that Bostic now sells curriculum he made to schools in Georgia, and that he has “multiple private companies where he profits of the curriculum that he sells.”

“And it’s amazing how you’ve gotten the schools to purchase the curriculum,” the Project Veritas journalist said.

“And they don’t even know what’s going on,” said Bostic. “I would say that I’m a good salesman, but I’m also an evil salesman. Like, so bad.”

#CRT ideologue @DrQuintinBostic quickly locked down his account after finding out he was caught on secret @Project_Veritas recordings boasting about violating @georgiadeptofed/@SuptWoods' #CRT ban in K-12 education. His educational material is used in Atlanta public schools. pic.twitter.com/mwoYppnFZS

When the journalist asked if the schools have state funding, Bostic replied, “they do.”

“So the state is basically paying for your curriculum without knowing what’s in it,” the journalist said.

Bostic revealed that two districts, Fulton County and Cobb County, use his curriculum, and that the curriculum is aimed at kindergarten-aged students. Atlanta, Georgia’s largest city, lies in Fulton County.

In another clip, Bostic revealed that he makes the money off of selling this curriculum, not the Teaching Lab, and that the state pays for it.

“When the state pays for your stuff, they don’t know that critical race theory is in it,” the journalist said.

“And people don’t know what critical race theory is. So when they see the word, alarm goes off. But if you teach the principles of it people are like ‘of course.'”

“So does your curriculum have critical race theory in it?” the Project Veritas journalist asked.

“And the government doesn’t know?” the journalist continued.

“They have no clue, and I’m like ‘this is great, this is good,'” Bostic said.

Bostic revealed that “behind the scenes” he messages to make sure teachers teach his curriculum in a certain way, using certain words and books. Bostic called Governor Brian Kemp an “idiot,” noting that his wife is a former teacher.

“What do you think she would do if she found out that there’s CRT?” the Project Veritas journalist asked in regard to Kemp’s wife.

“Oh, I would be nailed for sure,” replied Bostic, adding that “the worst I could see happening” is having his business license revoked, but continued on to say “I can keep consulting.” Bostic said that you can “teach kids things under the radar” through his curriculum.

When asked how he keeps the true contents of the curriculum under the radar, Bostic responded that he calls it “DEI (Diversity, Equity, and Inclusion) work.” Bostic also took aim at parents, saying “I hate to say it, but parents aren’t teachers.”

“Parents are ignorant,” the journalist chimed in.

“They are,” replied Bostic.

In another clip, Bostic was revealed saying that kids are pushing back against their parents, and that that’s the goal. The goal, he said, was to eventually “get kids to influence their parents to make the shift too.” When the journalist asked about parents who might push back after hearing it, Bostic replied, “who cares.”