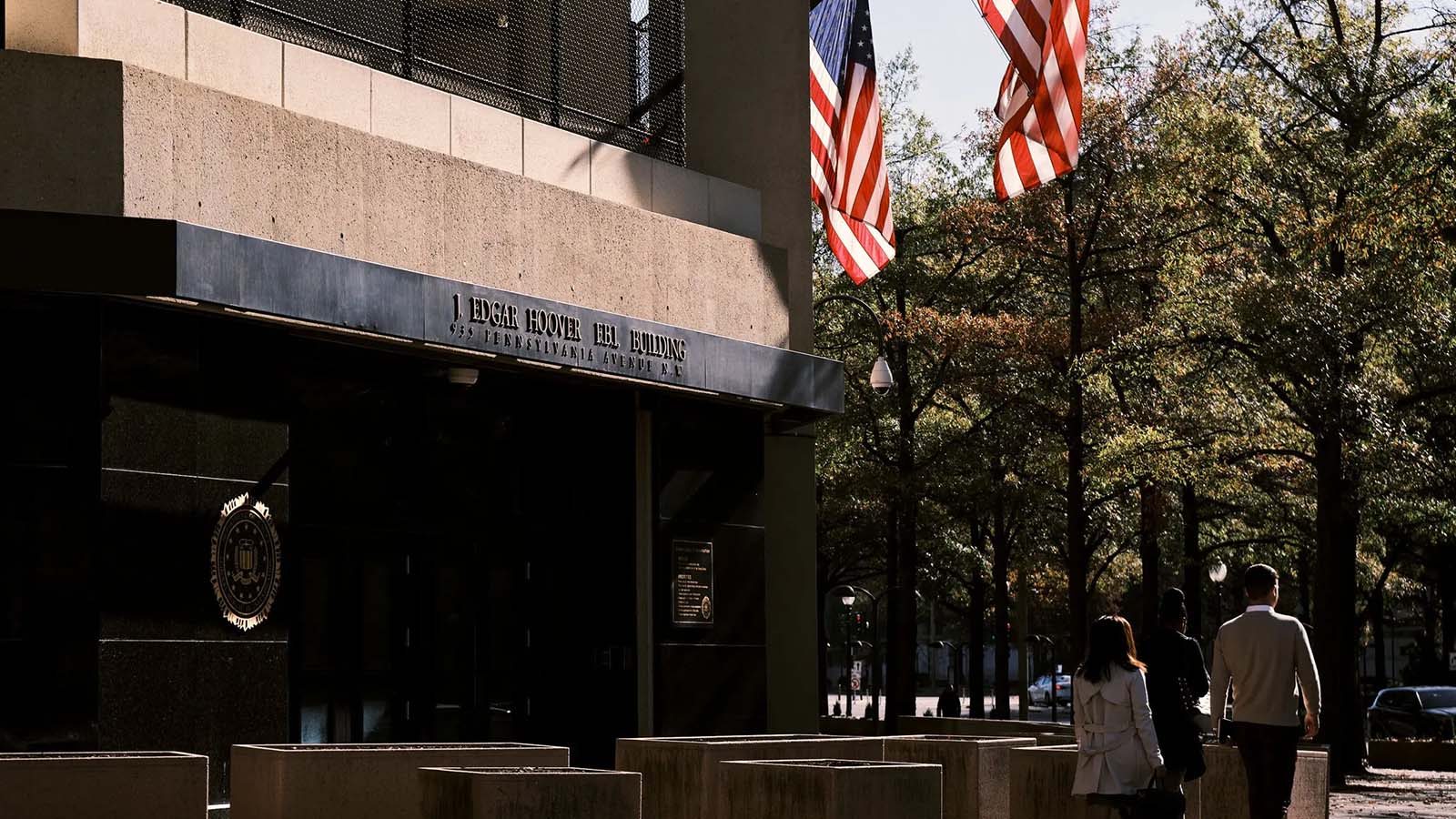 What’s the current timeframe these days of “conspiracy theories” becoming fact? Whatever it is, it sure seems to be accelerating. Heck, I’m old enough to remember when sharing the COVID-19 lab leak theory would get you banned from social media. Now even the “experts” have admitted that’s the most probable origin explanation.

It’s not just the pandemic, though. For years, conservatives proposed, after piecing together much evidence, that the FBI was somehow involved in the unrest that took place on January 6th, 2021. Yet, those calls for answers and accountability were met with condemnation. “How dare you question the impeccable reputation of the FBI,” they asserted while absconding from any critical thinking.

You can probably guess where I’m going with this. Despite well over a year of deflections and denials, it is now confirmed that no less than eight FBI agents were embedded in the Proud Boys organization during the period surrounding January 6th. 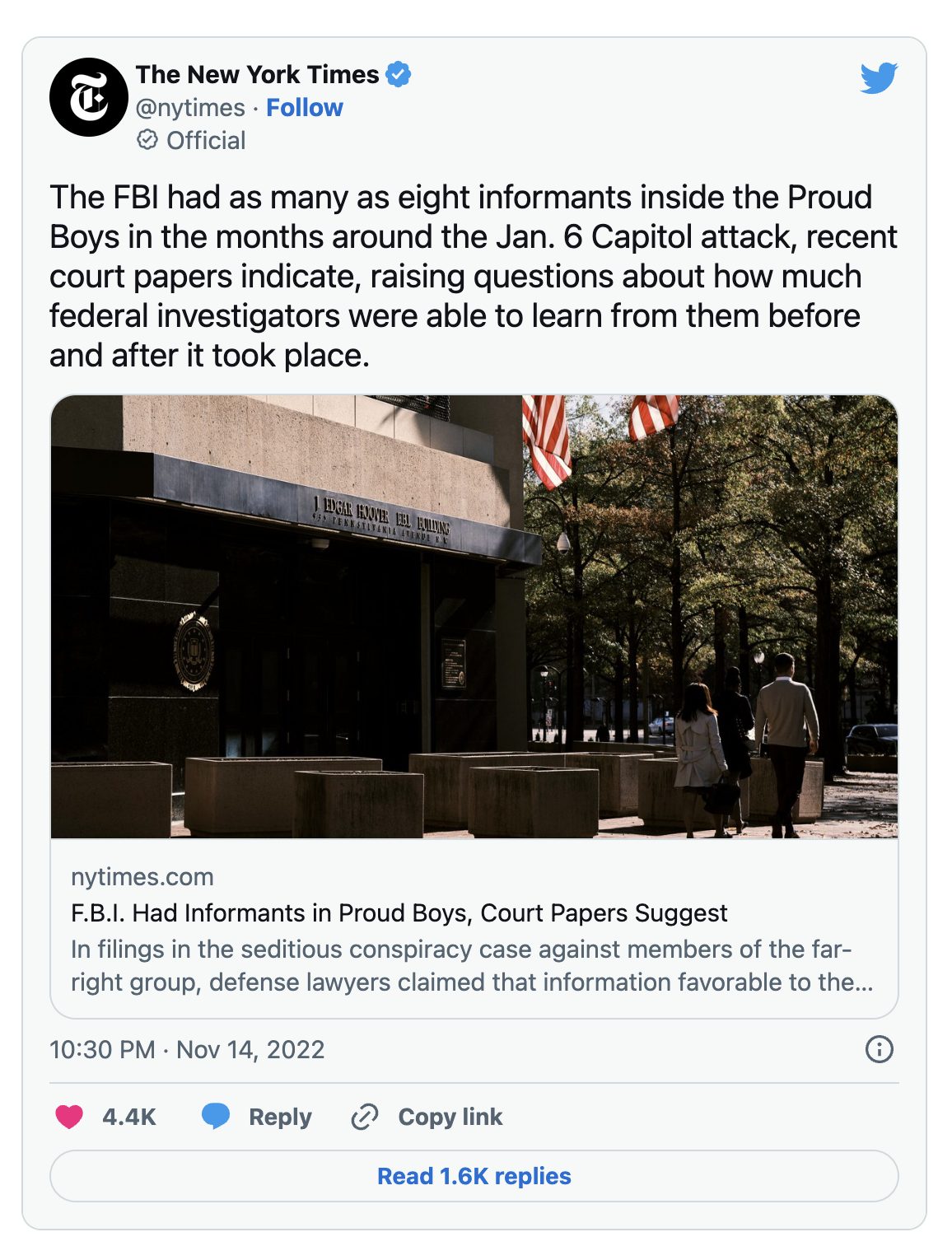 The F.B.I. had as many as eight informants inside the far-right Proud Boys in the months surrounding the storming of the Capitol on Jan. 6, 2021, recent court papers indicate, raising questions about how much federal investigators were able to learn from them about the violent mob attack both before and after it took place.

The existence of the informants came to light over the past few days in a flurry of veiled court filings by defense lawyers for five members of the Proud Boys who are set to go on trial next month on seditious conspiracy charges connected to the Capitol attack.

In the papers, some of which were heavily redacted, the lawyers claimed that some of the information the confidential sources had provided to the government was favorable to their efforts to defend their clients against sedition charges and was improperly withheld by prosecutors until several days ago.

I’m sure you are totally shocked by this news. Who could have possibly guessed that Christopher Wray’s FBI, which ran an entrapment scheme involving Gretchen Whitmer prior to the 2020 election, would end up having been intimately involved in the lead-up to January 6th?

You have to admire the framing by the Times, though, pondering how much “federal investigators were able to learn from them about the violent mob attack.” Yes, I’m sure that’s a real mystery. Conversely, the FBI agents likely knew exactly what was being discussed the whole time, which would mean one of two things.

One possibility is that the Proud Boys weren’t planning an insurrection and that conservatives who have called it a spontaneous event have been right all along. That would nuke all the deranged attempts to suggest that Republicans, including Donald Trump, somehow orchestrated the entry into the Capitol Building. The other possibility is that the FBI knew a riot was going to take place and did nothing to stop it, instead letting it play out for political reasons. Wouldn’t that be something? Yet, I wouldn’t even begin to put it past them.

Of course, everything I’m writing here might as well be words thrown into the sea. The FBI is nothing if it isn’t a completely unaccountable behemoth. The bureau will hide behind “national security” considerations and we’ll never find out the full extent of what transpired. Instead, the goalposts will move yet again with the press saying “well, sure, FBI agents were involved in January 6th, but that doesn’t mean anything.” Because nothing ever means anything. The corruption of government marches on, never ceasing.