Gianno Caldwell announced that his younger brother had been murdered in the South Side of Chicago in a Saturday tweet.

He’s describing the day of his brother’s death as a the “worst day of my existence.” 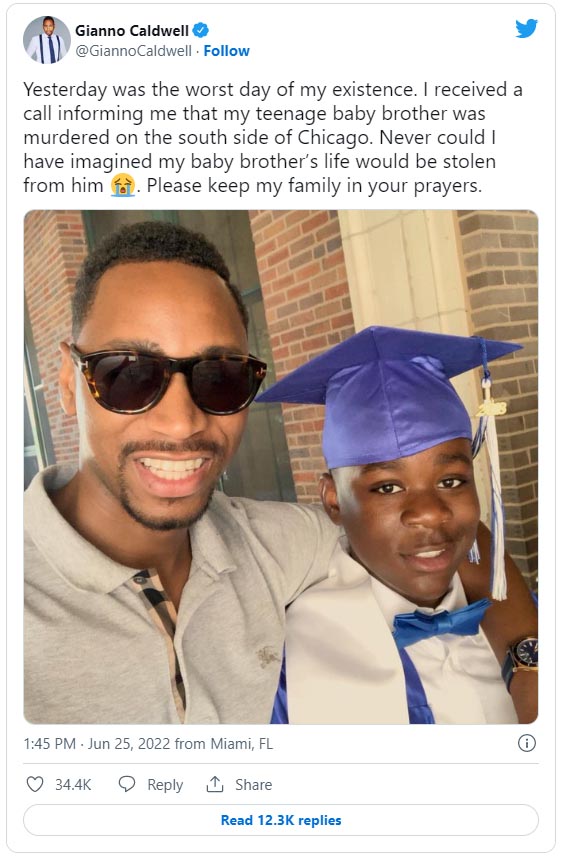 Caldwell was close to his brother, who looked up to him as a father figure in his life.

My little brother has never met his father and as devastating as this is, I am thankful to God for choosing me to be his big brother/father figure. pic.twitter.com/AZSrgxn296

Caldwell subsequently confirmed that his 18-year old brother, Christian, had been fatally shot. He wants the justice system to hold those responsible accountable.

“What I’m looking for right now is details from the police to discover who it was that murdered my brother,” said Caldwell.

“My baby brother never had a chance.”

Gun violence is a massive problem in Chicago. The city had a 55 percent increase in homicides in 2020, despite the city’s onerous gun control laws.

Obtaining and carrying a handgun legally is almost impossible in the city of Chicago.

Chicago’s crime problem has driven out some of the city’s residents, threatening its place as a center of the American economy.

Caldwell had previously described an incident in which his brother was attacked by gun-wielding men in 2017, according to Fox News.

At the time, he recounted an interaction with a Democratic state representative representing a Chicago district.

State Rep. LaShawn Ford told him that the Democratic Party had “failed black people, especially because of the violence in Chicago.”

But Caldwell went beyond the understandable call for justice, saying that he’s willing to forgive those responsible for his brother’s death.

“As a Christian who believes in forgiveness, who believes that there is a second path for people who could do something like this, all I want from my little brother, Christian, is justice. That’s it.”