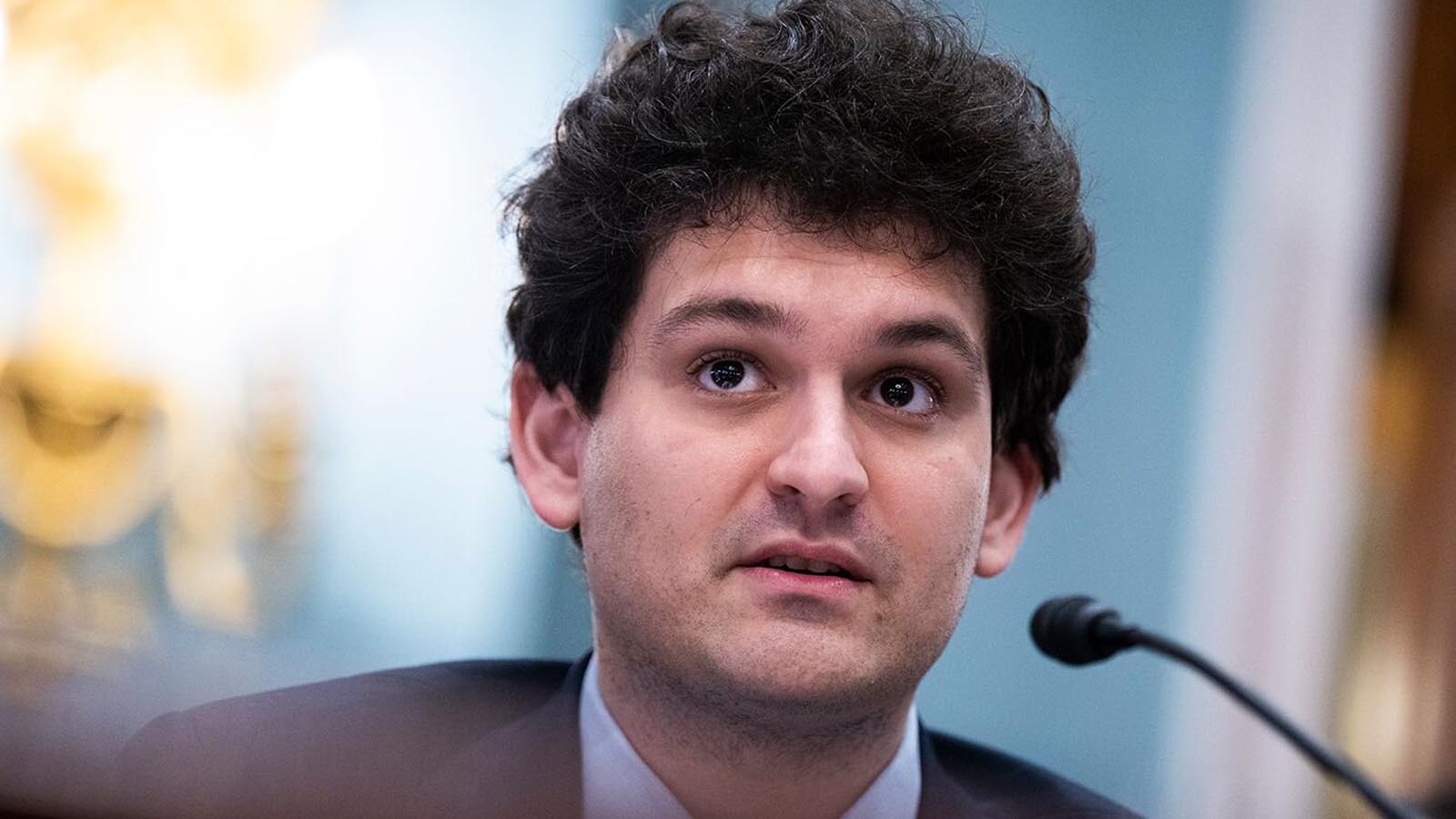 On Oct. 5, 2021, Bankman-Fried, FTX General Counsel Ryne Miller, and then-FTX President Brett Harrison went to dinner at the luxury Indian restaurant Rasika West End with Dan Berkovitz, who at the time was a commissioner for the U.S. Commodity Futures Trading Commission, one of several agencies that regulate cryptocurrency, according to emails obtained by the watchdog Protect the Public’s Trust and shared with the Washington Examiner.

It remains unclear what was discussed at the dinner, which occurred while Bankman-Fried was lobbying the CFTC to amend trading rules that would have given FTX more freedom and power over the cryptocurrency world. The former CEO courted the CFTC to back a proposal that would let FTX customers borrow trading money — which some officials reportedly supported secretly even though some regulators lamented it would destabilize markets.

FTX’s lawyer, Miller, paid the bill at the Rasika dinner and appears to have later been reimbursed to some degree by Berkovitz, according to the emails, which were released under the Freedom of Information Act and have not been reported on until now.

“Sam Bankman-Fried plans to be in DC this week,” wrote Miller to Berkovitz on Oct. 3. “We have some time for a Tuesday slot — any chance you’d be interested in meeting up. I can also offer some other time slots if that’s better.”

Later, upon agreeing to a meeting at Rasika, Miller noted that other attendees may be Zach Dexter, CEO of the cryptocurrency company Ledger X and the former CEO of FTX, former CFTC Commissioner Mark Wetjen, who joined FTX as head of policy and regulatory strategy, and also Michelle Bond, CEO of the Association for Digital Assets Markets. It is unclear whether these individuals attended the dinner.

“They are all pleasant and good for discussion. But can keep it small if you prefer,” wrote Miller.

The average entree at Rasika clocks in at over $25, and the restaurant boasts a dinner wine list with bottles ranging from $45 to $450. But Miller, who, according to the emails, appears to have paid the bill, only asked Berkovitz for $50.

“Commissioner,” wrote Miller to Berkovitz on Oct. 5. “Your dinner bill was $50. For Rasika West. You may send via Paypal to [email protected]”

“Thanks, Ryne,” Berkovitz replied two days later, on Oct. 7. “I’m making the payment to PayPal now. Let me know if you don’t receive it. Here’s a copy of the article I gave to Sam. Enjoy!”

“Received and thank you for the article,” said Miller. “Wishing you all the best in the new adventure.” 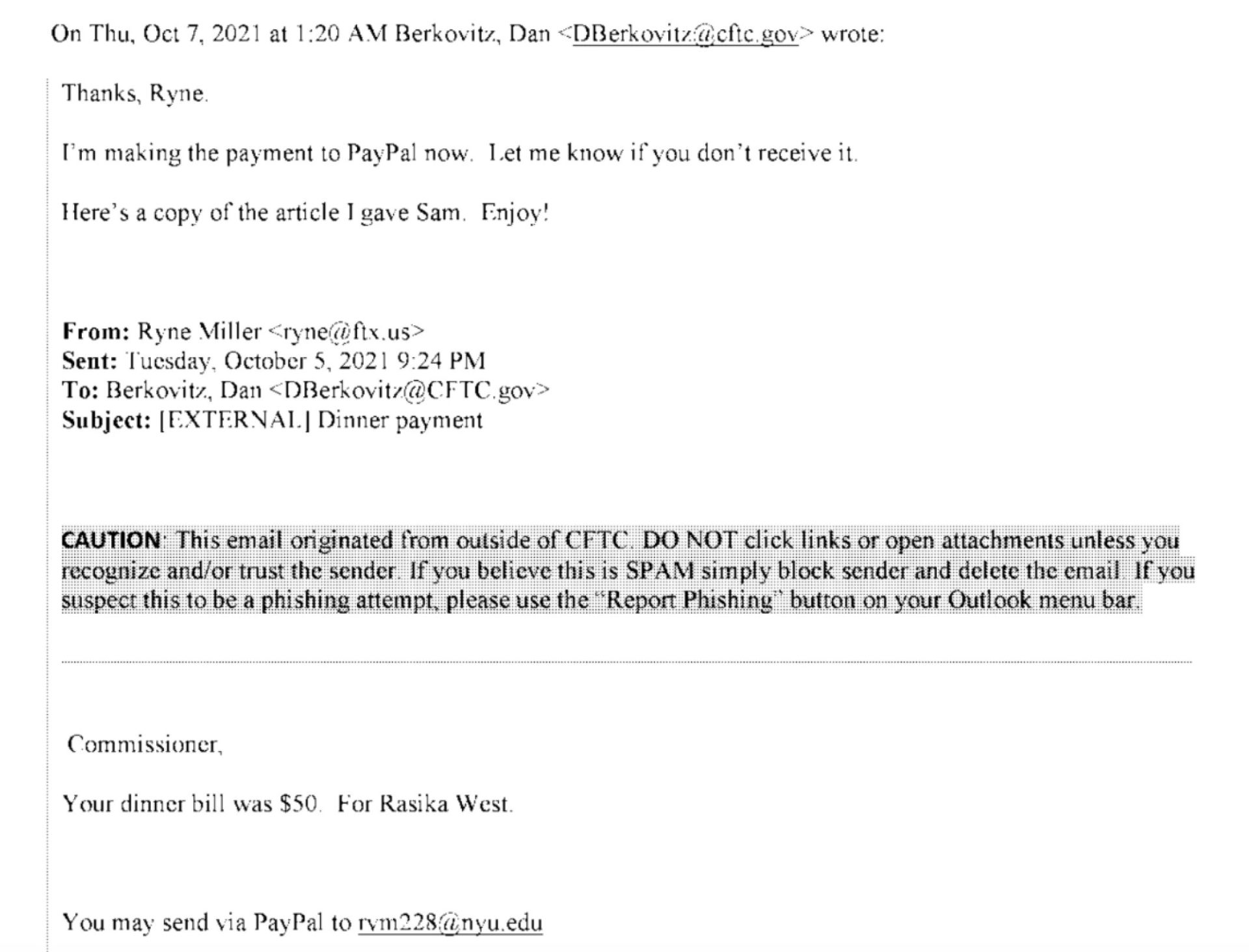 It is unclear what article Berkovitz was referring to. A receipt for the alleged PayPal transaction was also not included in the email thread.

“If ever there were a scene to conjure up a vision of a D.C. rigged toward corrupt insiders at the expense of the little guy, it would be difficult to top this one,” Michael Chamberlain, director of Protect the Public’s Trust, told the Washington Examiner. “Not long before its collapse and a raft of fraud charges, SBF and his gang were wooing one of their would-be regulators no doubt to try to manipulate the regulations to their advantage.”

The emails are yet another window into Bankman-Fried and FTX’s once-cozy relationship with the U.S. government. But that relationship has now been destroyed amid the exchange’s shocking collapse.

Bankman-Fried, who was once worth roughly $26.5 billion, is being charged by the Justice Department with money laundering and various types of fraud after FTX allegedly diverted billions of dollars in customer funds to Alameda Research, a bankrupt cryptocurrency group that Bankman-Fried also founded. He faces up to 115 years in prison.

During trips to D.C. in the past year, Bankman-Fried often met with the CFTC, according to reports. The agency has been slammed for allegedly catering to the cryptocurrency industry and taking little action to impose regulations that could protect investors from a volatile market.

The CFTC on Dec. 13 charged Bankman-Fried, FTX, and Alameda with causing “the loss of over $8 billion in FTX customer deposits,” according to a court filing.

Bankman-Fried sought to gain influence with officials at the CFTC, and at other agencies, so FTX could become “umpires of the crypto industry,” the Washington Examiner reported based on an October 2021 email exchange between the former FTX CEO and Berkovitz.

“Apparently, if you spout the right rhetoric and throw millions in the right corners you, too, can get a private dinner with the people who write the rules you have to live by,” added Chamberlain.