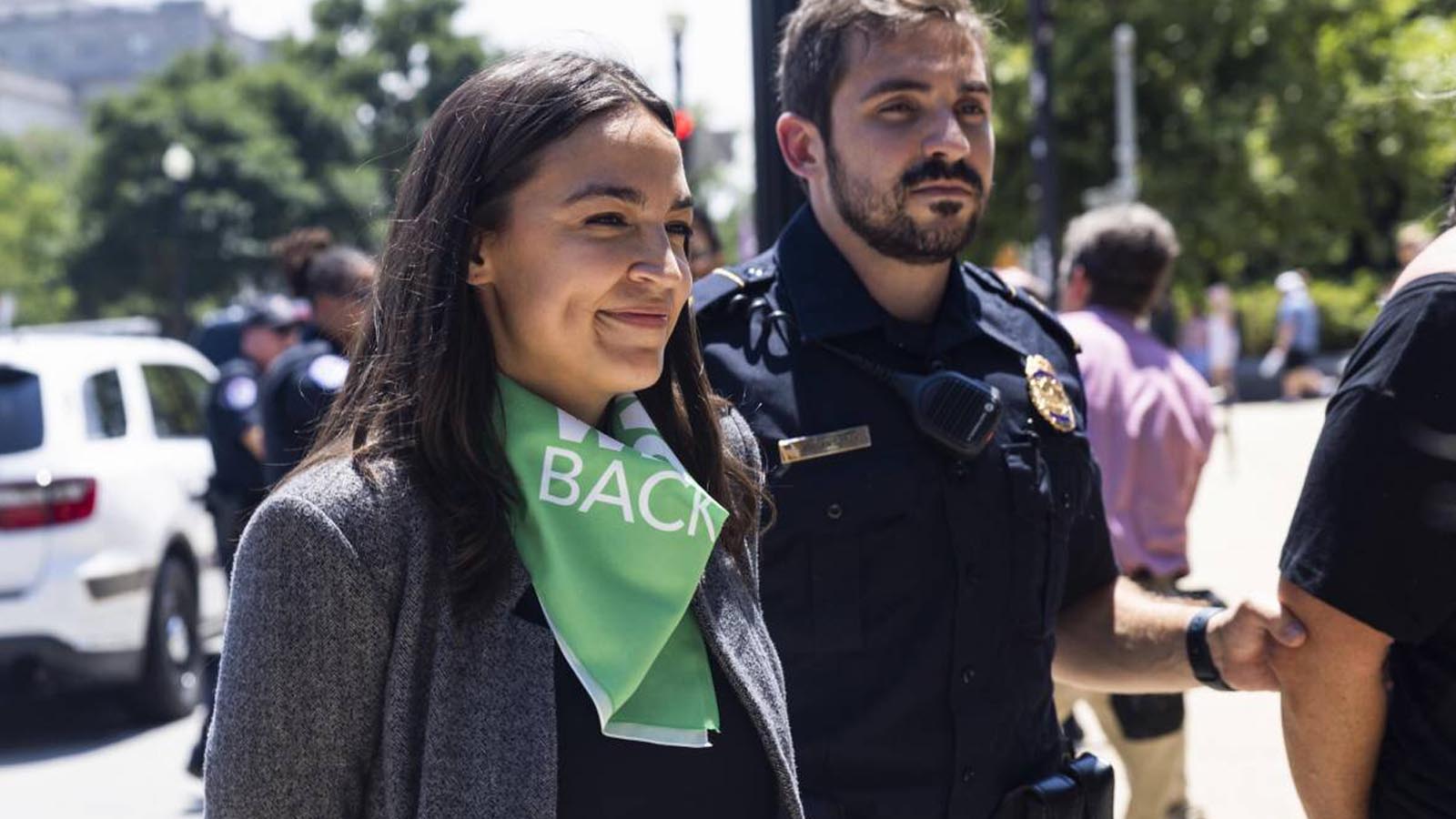 On Tuesday, over 30 Democrats, including 17 Democratic lawmakers, including squad member Rep. Alexandria Ocasio-Cortez (D-NY), were arrested outside the U.S. Supreme Court for blocking First Street NE. As Spencer highlighted at the time, it was quite a spectacle, with AOC and the others pretending to be handcuffed, though the congresswoman did at one point drop the charade to engage in a fist-pump.

Sarah highlighted earlier how ABC News was criticized for falling for the stunt. Many others, though, saw right through the scheme and mocked the Democratic lawmakers for such a stunt. 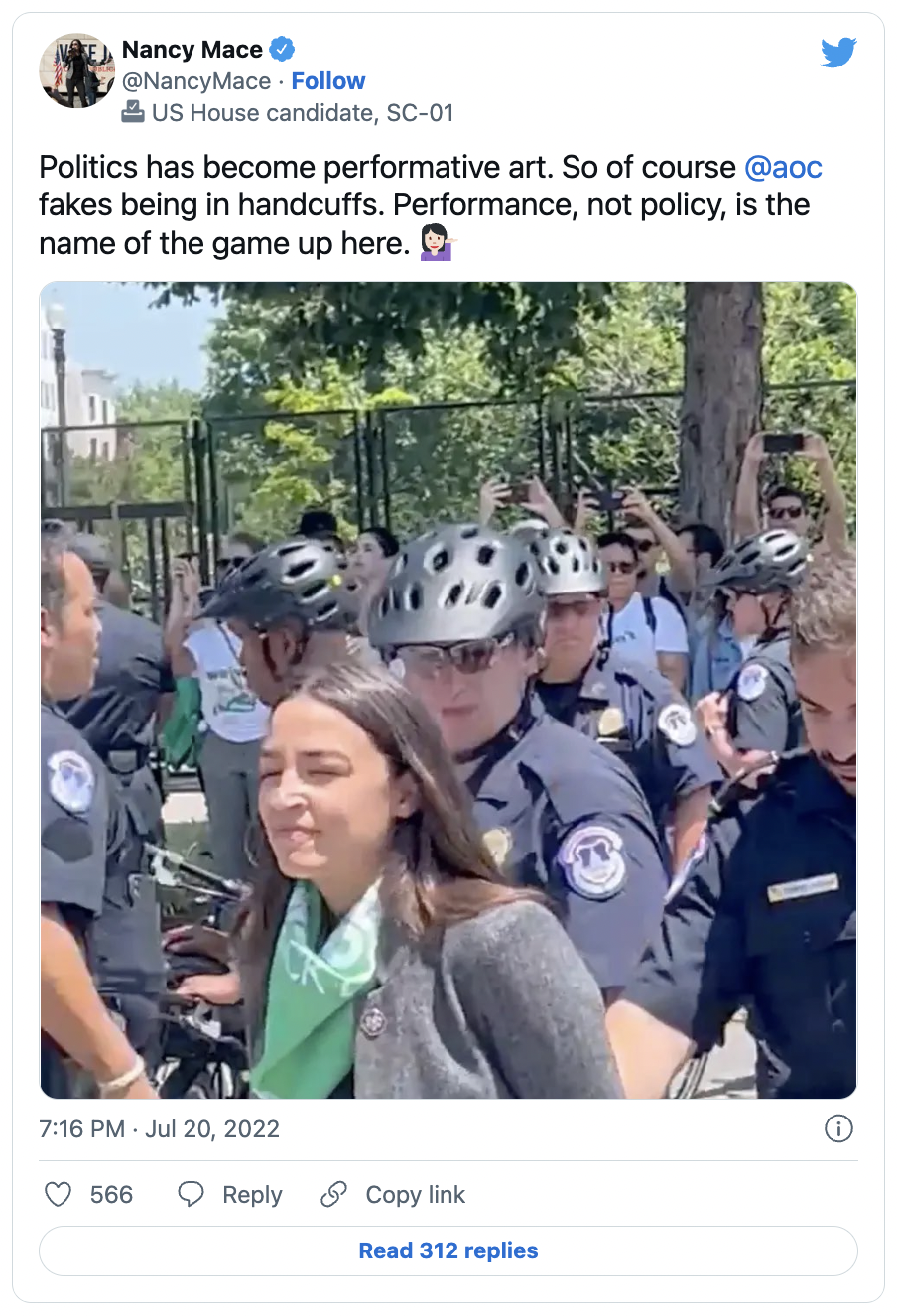 The arrests starting taking place at about 1:20pm on Tuesday, after police had given the protesters three warnings. Shortly after 1:30pm on Wednesday, AOC finally addressed her act, by responding to Rep. Nancy Mace (R-SC) who was among those calling her out over Twitter. “Politics has become performative art,” Mace’s tweet read in part. “Performance, not policy, is the name of the game up here.”

No faking here. Putting your hands behind your back is a best practice while detained, handcuffed or not, to avoid escalating charges like resisting arrest.

But given how you lied about a fellow rape survivor for “points,” as you put it to me, I don’t expect much else from you. pic.twitter.com/lUc1TPS21D

AOC claimed that she was not, in fact, faking it, but that it was “a best practice while detained, handcuffed or not, to avoid escalating charges like resisting arrest.” She then went after Mace on a personal level, claiming she “lied about a fellow rape survivor for ‘points.'”

As our friends at Twitchy highlighted, many took issue with AOC claiming it was the “best practice,” especially since she departed from said “best practice” for the fist pump.

IT TOOK YOU THIS LONG??? AND THATS ALL YOU CAME UP WITH?? https://t.co/ofNkbIhoyG

Why did you raise your fist then lol

Cops are in the replies saying it’s better to keep your hands where they can see them. You only put them behind your back if you’re told to, and they only tell you to if they’re going to cuff you.

As a public defender, I can attest, if you’re being arrested one of the safest things to do is put your hands behind your back or where an officer can see them. And then remember, DO NOT TALK TO THE COPS. Invoke your right to silence and ask for a lawyer immediately.

Why would you raise a fist then? https://t.co/k1U2BFFZ8J

Mace herself responded to AOC’s tweet, complete with video of the arrest, as she also took issue with the fist bump.

Idk. Here you are @aoc breaking your fake handcuff pose for a good fist pump and shout out to the crowd – looking “tough”! Good theater though… 💪🤷🏻‍♀️🥂 https://t.co/0kfihuevYa pic.twitter.com/68rjopkdMi