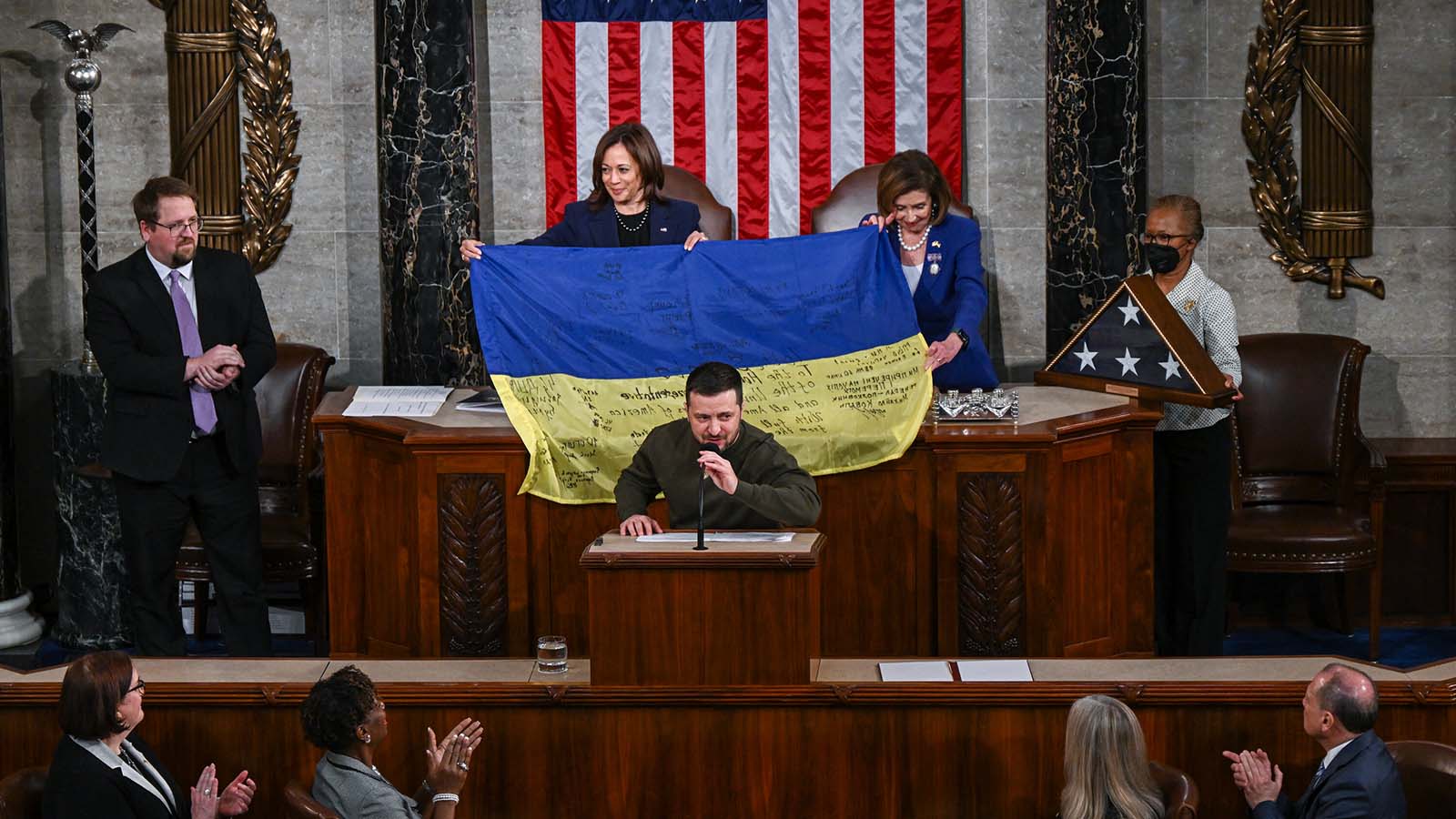 President Joe Biden greeted Ukrainian President Volodymyr Zelensky at the White House on Wednesday, prompting a message that the U.S. will continue to financially support Ukraine even months after Russia invaded the country.

Wearing his signature long-sleeved green shirt, Zelensky said that he and Biden share the “same values” after the president had vowed to help Ukraine for “as long as it takes.”

“We fight for our common victory against this tyranny. And that is real life. And we will win. And I want [to] win together. Not want — I am sure,” Zelensky said while standing next to Biden at the White House earlier on Tuesday.

At the beginning of his speech to a joint session of Congress later on Tuesday evening, Zelensky described what it is like “fighting” on the “battlefield.”

“Every inch of that land is soaked in blood. Roaring guns sound every hour. Trenches in the Donbas change hands several times a day in fierce combat and even hand fighting, but the Ukrainian Donbas stands,” he said.

As both Democrats and Republicans erupted in applause, Rep. Lauren Boebert (R-CO), who has voiced criticism of sending aid to Ukraine, remained seated.

The Ukrainian president told Congress that their money is “not charity,” but an “investment.”

“Your money is not charity. It’s an investment in the global security and democracy that we handle most responsibly,” Zelensky said, adding “your support is crucial, not just to stand in such fight, but to get to the turning point to win on the battlefield.”

Zelensky’s arrival in D.C. coincided with another gift of military aid from the Biden administration of a cool $1.85 billion, including a defensive Patriot missile battery. Another $45,000,000,000 is set to be gifted to Ukraine in the Democrats’ $1.7 trillion omnibus bill.

However Zelensky warned that the package, in addition to the billions of dollars in other military and financial aid the U.S. has already given him, is “not enough.”

“I came here in the U.S. to thank the people of America — people who do so much for Ukraine,” Zelensky said.

“Standing here I recall the words of President Franklin Delano Roosevelt, which are, I think, so good for this moment. The American people in their righteous might will win through to absolute victor,” Zelensky said, adding “the Ukrainian people will win too. Absolutely.”

In a video posted this week, Zelenksky said that the main reason for his visit to the states is to make sure funding for his country doesn’t dry up.

Earlier in the day, Biden told Zelensky that it was “particularly meaningful” to speak to the Ukrainian president in person and “look each other in the eye.”

The man who perpetually presents the image of a wartime president fighting on the front lines was also told by Biden that he’d been named Time Magazine’s “Man of the Year.”

The question everyone should be asking is why is the U.S. putting so much money and effort into helping Ukraine when America is facing some of the biggest problems in history. Senate GOP Leader Mitch McConnell said earlier this week that the “number on priority” for the United States is providing aid to Ukraine, even though recent polling by Gallup has showed that the fight between Russia in Ukraine doesn’t rank in the top ten issues identified by Americans, and most recently registered at zero percent in a survey of Americans’ top problems.

If Biden put half as much energy into combatting problems that are threatening the U.S. as he has provided support for Zelensky, our country might not be facing record-high inflation and a border overrun by illegal migrants.