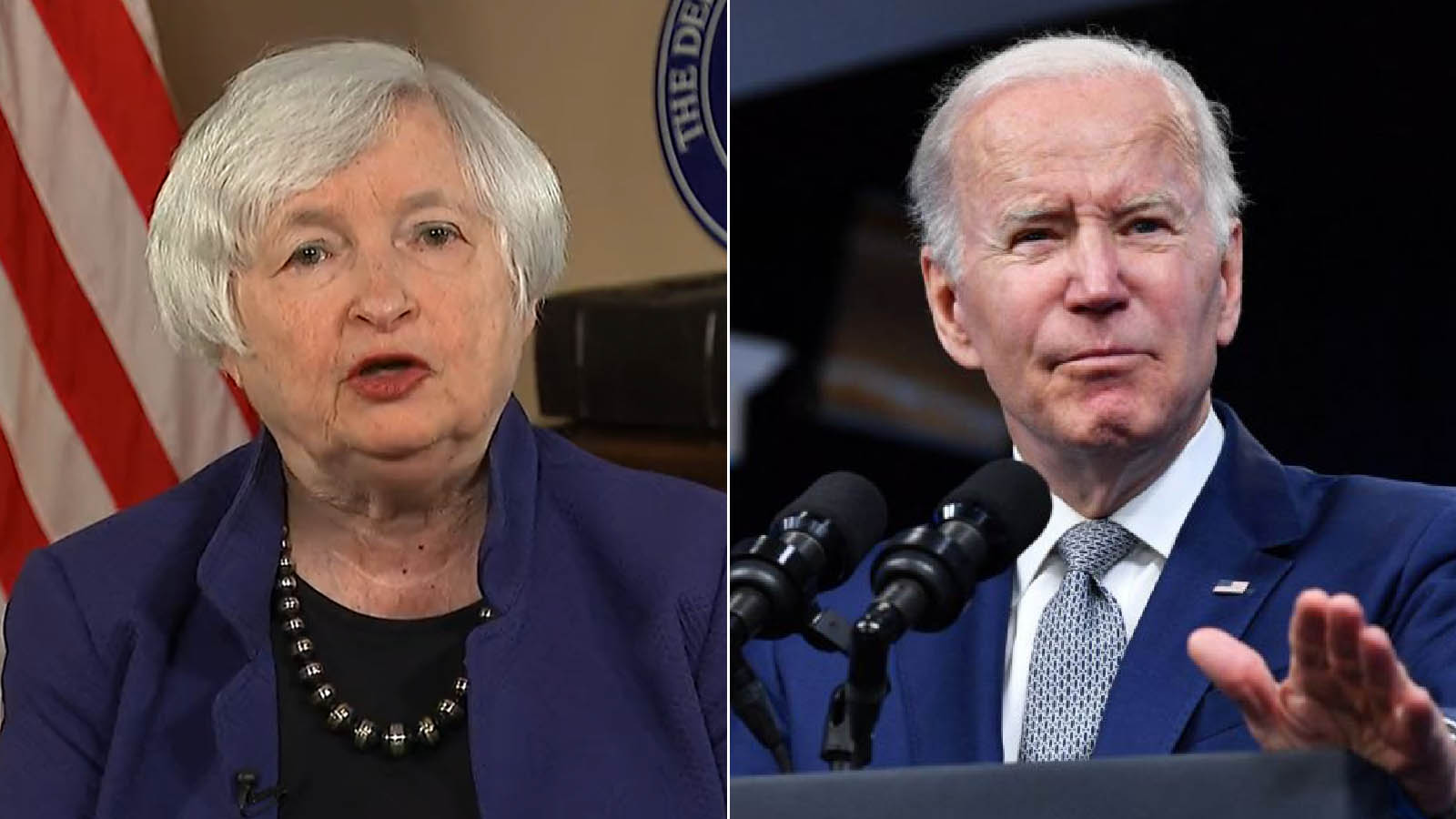 Perhaps the most idiotic thing to ever come out of the Biden administration – and there has been plenty to choose from – was the repeated lie that (trillions in) stimulus does not cause runaway inflation, but rather lowers it.

And while Biden’s handlers were generous enough to bribe supposedly smart people to repeat said lie to give it credibility, like for example the chief economist at JPMorgan who last March said that the $1.9 trillion Biden stimulus “won’t spark runaway inflation” (narrator: it did)… 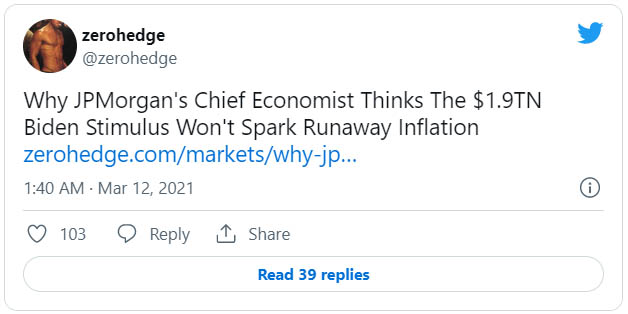 … and of course Janet Yellen, whom we mocked last March when she said that an “inflation problem was unlikely to result from stimulus”…

… the truth, of course, as Jeff Gundlach noted recently, is that an “intelligent twelve year old” was able to predict that excessive stimulus causes inflation…

Excessive stimulus caused inflation. An intelligent twelve year old was able to predict it. Ms. Yellen, long serving Fed Chair…..yes, Fed Chair,…admitted today she was not. On the inflation bright side, and it is a very bright side, Build Back Biden did not pass.

… and yet the 75-year-old Treasury Secretary and former Fed chief could not, as she herself admitted last week when Yellen told CNN “Well, look, I think I was wrong then about the path that inflation would take” when she was shown previous remarks she’d made last year where she indicated there would only be a “small risk” of inflation, and that it would be “manageable.”

.@SecYellen on inflation being transitory: "I was wrong then about the path that inflation would take. As I mentioned, there have been unanticipated and large shocks to the economy […] that I, at the time, didn't fully understand." https://t.co/AlrXn4kT0r pic.twitter.com/9tqxo0iA3B

Only instead of taking one for the team of senile, clueless economists and Putin puppets (because if there is any admin that has done the Kremlin’s bidding by sending oil prices to near record highs, it is Biden’s) especially after the so-called “president” made it clear he will blame Powell and the Fed ahead of the midterms for his admin’s catastrophic MMT policies which have assured an avalanche this November that will hand control of Congress to republicans on a silver platter…

… Yellen has decided to strike back, and as Bloomberg reports citing an advance copy of the Treasury secretary’s biography- due out on Sept. 27, just weeks before the midterms – the treasury secretary initially urged Biden administration officials to scale back the $1.9 trillion American Rescue Plan by a third “worried by the specter of inflation”… the same stimulus plan that she herself said last March would not lead to an inflation problem. But, in retrospect, she appears to have changed her mind.

“Privately, Yellen agreed with Summers that too much government money was flowing into the economy too quickly,” writes Owen Ullmann, the book’s author and a veteran Washington journalist who has covered economics and politics in Washington since 1983, referring to former Treasury Secretary Lawrence Summers, who severely criticized the size of the aid plan.

Of course, since it would be an act of near treason for the Secretary of the Treasury to confirm now (if not then) that she personally was against what has emerged as Biden’s most hated policy, prompting questions about how actually gives economic advice to Biden and why does Soros have more influence on US policies than the Treasury, the denials came in fast and furious, with Bloomberg reporting that a Treasury spokesperson disputed the claims.

“The Secretary did not urge a smaller package and, as she has said, believes that without the American Rescue Plan, millions of people would have been economically scarred, and the country’s historically fast recovery would have been far slower,” Treasury spokesperson Lily Adams said in response to the book’s claims. What Lily failed to mention is that without the package, US gas prices wouldn’t be on the verge of double digits.

Ullmann’s account sheds new light on a policy debate that preceded the eruption of inflation, which now poses a major political threat to President Joe Biden and his Democratic party’s control of Congress.

Fears of overheating have since been confirmed making a mockery of the idiots known as “team transitory” as price increases this year hit a 40-year high and have destroyed Biden’s standing among voters, who is now even more unpopular than Trump was at this time in his tenure. Meanwhile, sensing doom in November, Democrats have blamed the cost surge on supply-chain bottlenecks caused by the pandemic and on energy price surges following Russia’s invasion of Ukraine. They’ve also pointed the finger at US energy companies, and most recently, the Fed itself. But as it has now become clear to both smart 12 year olds and even economists, outsize demand – fueled in part by Biden’s spending plan – was the driving force behind galloping inflation.

Yellen’s concern about inflation “is why she had sought without success to scale back the $1.9 trillion relief plan by a third early in 2021 before Congress passed the enormous program,” wrote Ullmann, who had “unfiltered access” to Yellen as he researched the book, according to publisher PublicAffairs.

Ullmann wrote, “She worried that so much money in the pockets of consumers and businesses would drive up prices at a time when the pandemic had caused severe shortages of goods that were in unprecedentedly high demand.”

Now if only she had said as much instead of – say – repeating the opposite over and over, just to placate her senile boss and lose every last shred of credibility she may have had. Hilarious, even the biography – her desperate attempt at expiration – is confused how to spin Yellen’s revisionary view of events:

It’s unclear from the book how staunchly Yellen lobbied to cut back the size of the third wave of aid or whom she engaged with in the administration. And Ullmann goes on to emphasize that Yellen threw her full weight behind the bill as it moved ahead in its larger size.

The Treasury chief endorsed the package before US lawmakers, telling them that historically low interest costs on federal debt had given the government space for fiscal expansion. She has continued to defend the ARP even as high inflation proved persistent. In an April 28 speech, she said it had helped drive unemployment to 3.6%, practically a 50-year low, and had prevented the pandemic from causing a much higher degree of suffering for Americans.

Still, Yellen “would have preferred something closer to $1.3 trillion, according to colleagues,” Ullmann wrote. “But given the choice between Biden’s full $1.9 trillion package and less than $1 trillion that some in Congress preferred, Yellen believed going big was the better course.”

Yellen also felt that even if the bill pumped too much money into the economy, the subsequent spike in inflation would be “transitory,” a term she used through 2021.

Even more remarkable is that according to the biography, while Yellen pushed back against Biden’s stimmies, but not really and endorsed them in public at every opportunity, Yellen was angered by Summers’ attacks on the stimulus plan, “even though she shared some of his worries.” Yes, you read that right: Yellen disagreed with Biden, but she was more angry when someone else criticized his plan! This kind of cognitive dissonance of the highest order has to be a Democrat thing.

“Yellen was irritated that he would cause his own party so much grief by arming Republicans and some Democrats — such as Senator Joe Manchin of West Virginia, a conservative by Democratic standards — with a justification for opposing subsequent spending proposals on Biden’s agenda,” Ullmann wrote.

Of course, it’s too little too late now, and with even the liberal media turning on Biden, Yellen’s last-ditch attempt to preserve some of her reputation in the twilight of her career, and life, will be a miserable failure just like Biden’s entire administration as even Jeff Bezos of Democracy Dies In Doublespeak fame, now attests…

their best to add another $3.5 TRILLION to federal spending. They failed, but if they had succeeded, inflation would be even higher than it is today, and inflation today is at a 40 year high.