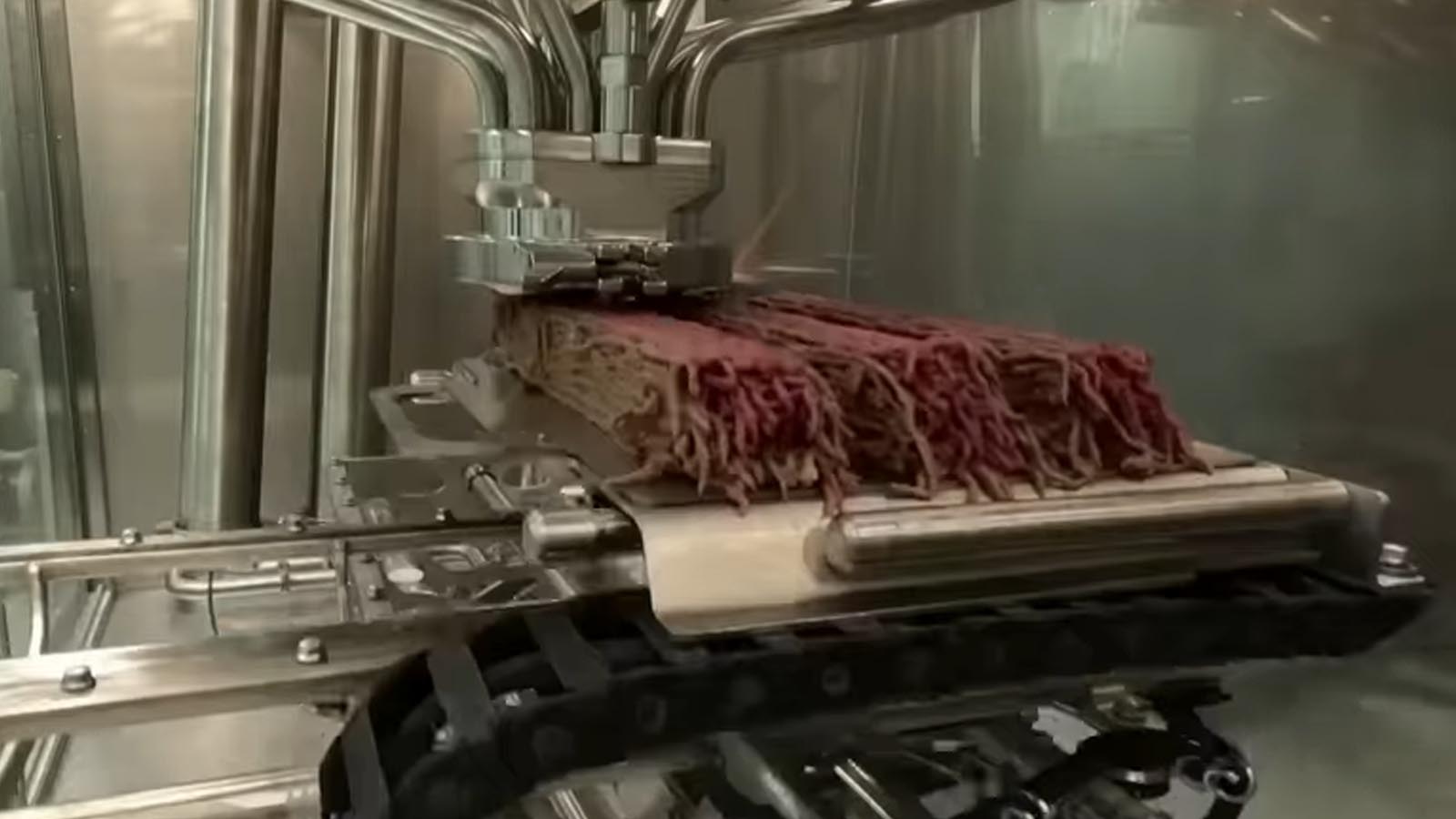 It has been said that sausage is something you can enjoy, but you wouldn’t want to see it made.

Then, would you prefer your “meat” extruded from a nozzle in a laboratory?

More to the point: Would such a food be as delicious and nutritious as the original item it is trying to displace in the market?

Redefine Meat, a startup out of Israel, is one of the latest companies attempting to sell plant-based alternatives to actual meat. Last week the firm announced a partnership that will see its products distributed throughout Europe, according to Reuters.

Specifically, Redefine Meat is trying to introduce its steak cuts: an offering that is neither real steak, nor cut. The meat analogue is manufactured by 3D printing. Layer upon layer of plant-derived biomass is laid down until something approximating the size and shape of a real slab of steak is complete.

It’s all very impressive. A technician uses a touch screen to select cut, marbling, tenderness and amount of fat. From there the 3D printer custom builds up the so-called steak, level by level.

It is also very expensive. The “meat” — which is made from soy proteins, beetroots, coconut fat and other botanical materials — is being sold at $40 per kilogram. That is significantly higher than the average all-beef steak that can be bought at a domestic grocery store.

But that’s not stopping activists ranging from vegans to climate change extremists from demanding that people switch to a completely plant-based diet absolutely bereft of any animal product.

In regard to human nutritional needs however, that may not be the wisest course to follow.

A 2021 study determined that beneath the succulent-seeming veneer, plant-based alternatives are wildly lacking in nutrients that are ordinarily readily found in grass-fed animal products. Beef is richer in many proteins, anti-oxidants, vitamins and other substances necessary for healthy nutrition.

The study did find, however, that the plant-based substitutes have a higher proportion of other nutrients than the ground beef did. The researchers suggested that real meat and plant-derived substitutes could be complementary, as opposed to one product being predominant.

Plant-based food advocates continue to claim that their non-animal product “meat substitute” is just as good as the real thing, if not better. And they are increasingly insisting that people give up real meat products.

But the free marketplace is tilting against that notion. Earlier this year McDonald’s introduced its “McPlant” to select locations. The all-plant patty courtesy of Beyond Meat was pitched as being just as delicious as a standard McDonald’s burger. Customers disagreed, however, and the item was removed.

As for Beyond Meat, the company just announced massive layoffs and the departure of three executives.

In addition to the matter of “is it still delicious?”, plant-based substitutes are ascribed by some as having the quality of “woke”: a turn-off for many who are disgusted with “progressive” politics. Cracker Barrel received backlash after offering “Impossible Sausage” because some customers believed the company was selling out to leftism.

Also complicating the issue is the belief by some authorities in the field that plant-based “meat” is overly reliant upon chemicals and genetically modified ingredients to give the product its desired look and taste.

Ultimately, this is a matter that will ideally be settled by the customers. If people do not want actual meat replaced with plant-derived products, they should not be forced to purchase and consume them. It must not be an issue decided upon by governments, multi-national corporations or people like Bill Gates.

If you are determined to have fake beef and pork, consider: The Play-Doh Kitchen Creations Burger Barbecue Food Set is currently selling for 12 bucks. That’s cheaper than plant-derived “meat,” and as Play-Doh is flour-based, perhaps it is just as nutritious.