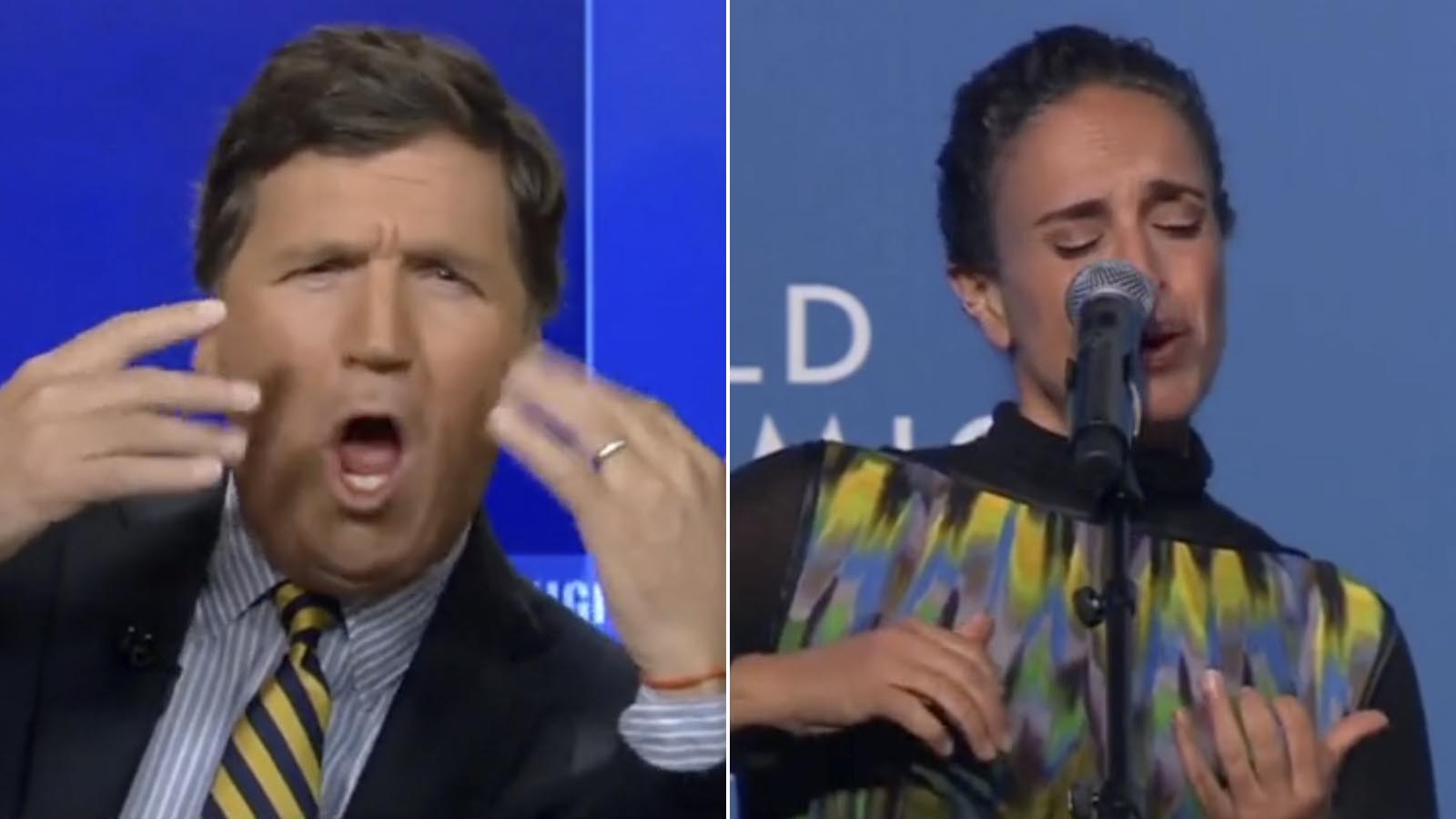 On his Friday night program Tucker Carlson said “Let’s check in on our lizard overlords in Davos, Switzerland,” and played a clip from a bizarre musical performance that took place at this year’s World Economic Forum summit.

In the clip, the performer, known as Noa, expels a sound resembling one long “Wooo” that cascades up and down in an arhythmic tonal medley accompanied by an acoustic guitar. “Yeah, those people run the world! They’re so impressive!” Carlson said. “What a bunch of freaks.”

According to the WEF website, Noa is “Israel’s most highly acclaimed international singer, songwriter, percussionist, speaker and activist,” who dedicates her time to “the relationship between cultural diplomacy and leadership and the Climate Crisis.”

The performance was part of a WEF summit panel titled “Noa’s Ark – Music as a Catalyst for Change” that was followed by a conversation on “how art and science can be interwoven with diplomacy and decisions for the collective good.”

During the panel, Noa was asked, “Why do people actually hate each other?”

“People are afraid. Fear is our enemy. So you’re afraid somebody will take something away from you. Right? You’re afraid they’ll take away your land, your identity, your water, your God.”

The WEF has advocated for the end of the privatization of land, government control of water and resources, and secularism. On their website, it is written that “the land, air, water, landscape, natural resources, the social amenities that society inherits, the data we produce and our cultural institutions all belong to everybody and belong in nature to nobody.”

In a now-deleted 2016 article from the group’s website, the WEF published an article by Ida Auken, a member of Danish Parliament, that read, “Welcome to 2030. I own nothing, have no privacy, and life has never been better.”

In a 2019 article from Haaretz, Noa equated President Donald Trump as ‘evil’ in a piece titled, “What’s the Alternative – to Join the Forces of Evil?’ Israeli Singer Noa’s Revolution Against ‘Trumpism.'”

The Jewish News reports that in 2017, she referred to Trump as “a modern-day Hitler” and has been a vocal critic against Israel’s “actions in the West Bank.”

According to the Times of Israel, Noa “allegedly supports the boycott, divestment and sanctions, or BDS, movement against Israel.” After that news came out, ​​the Jewish National Fund of Canada withdrew sponsorship of an event in 2016 set to feature Noa.