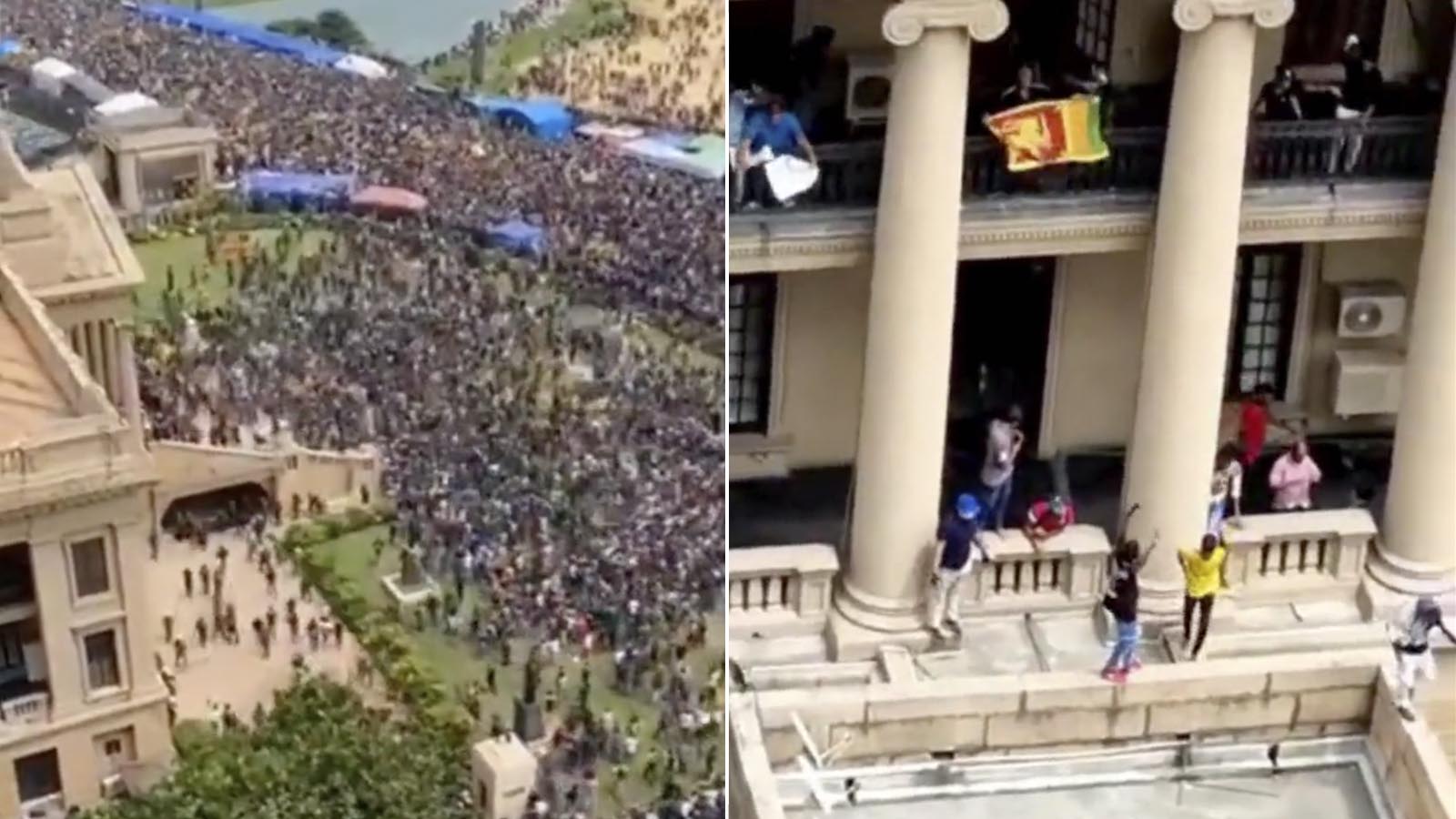 Sri Lanka’s President Gotabaya Rajapaksa fled his official residence on Saturday shortly before protesters, angered by an unprecedented economic crisis, overran the compound and stormed his nearby office.

Thousands of people had surrounded the leader’s home to demand his resignation, blaming government mismanagement for a downturn that has subjected the island nation’s 22 million people to months of bitter hardship.

As the crowd surged at the gates of the presidential palace, troops guarding the compound fired in the air to hold them back until Rajapaksa was safely removed.

“The president was escorted to safety,” a top defence source told AFP on condition of anonymity. “He is still the president, he is being protected by a military unit.”

Footage broadcast live on social media showed hundreds of people walking through the palace, with some among the boisterous crowd jumping into the compound’s pool for a swim.

Others were seen laughing and lounging in the stately bedrooms of the residence.

Protesters enjoying Sri Lanka’s absconding President’s swimming pool! No dictator should remain in illusion that the power is for ever, and when the end comes, it is always violent and nasty. pic.twitter.com/T3ePbkA0gM

The colonial-era state mansion is one of Sri Lanka’s key symbols of state power and officials said Rajapaksa’s departure raised questions as to whether he intended to remain in office.

“We are awaiting instructions,” a top civil servant told AFP. “We still don’t know where he is, but we know he is with the Sri Lanka navy and is safe.”

Private broadcasters showed what appeared to be a vehicle convoy belonging to the president at Sri Lanka’s main international airport, but there was no confirmation on whether he had left the island.

Soon after the crowd stormed the presidential palace, Rajapaksa’s nearby office also fell into the hands of protesters.

Three people were hospitalised after being shot along with 36 others who suffered breathing difficulties following intense tear gas barrages, a spokeswoman for the main hospital in Colombo said.

Prime Minister Ranil Wickremesinghe, who would assume the presidency in the event of Rajapaksa’s resignation, has called an urgent cabinet meeting to discuss a “swift resolution” to the political crisis.

Sri Lanka has suffered through months of food and fuel shortages, lengthy blackouts and galloping inflation after running out of foreign currency to import vital goods.

Thousands of people had poured into the capital for Saturday’s demonstration, the latest outbreak of unrest sparked by the crisis.

Police had withdrawn a curfew issued on Friday after opposition parties, rights activists and the bar association threatened to sue the police chief.

Thousands of anti-government protesters ignored the stay-home order and even forced railway authorities to operate trains to take them to Colombo for Saturday’s rally, officials said.

“The curfew was not a deterrent, in fact it encouraged more people to get on the streets in defiance,” the defence official said.

The country has nearly exhausted already scarce supplies of petrol, but protesters backed by the main opposition parties hired private buses to travel to the capital.

Demonstrators had for months been camped outside Rajapaksa’s seafront office to demand his resignation over the government’s mismanagement of the crisis.

Authorities said they had deployed nearly 20,000 troops and police officers for a security operation to protect the president.

Sri Lanka has defaulted on its $51 billion external debt and has been in bailout talks with the International Monetary Fund.

Nine people were killed and hundreds wounded when clashes erupted across the country after Rajapaksa loyalists attacked peaceful protesters outside the president’s office in May.