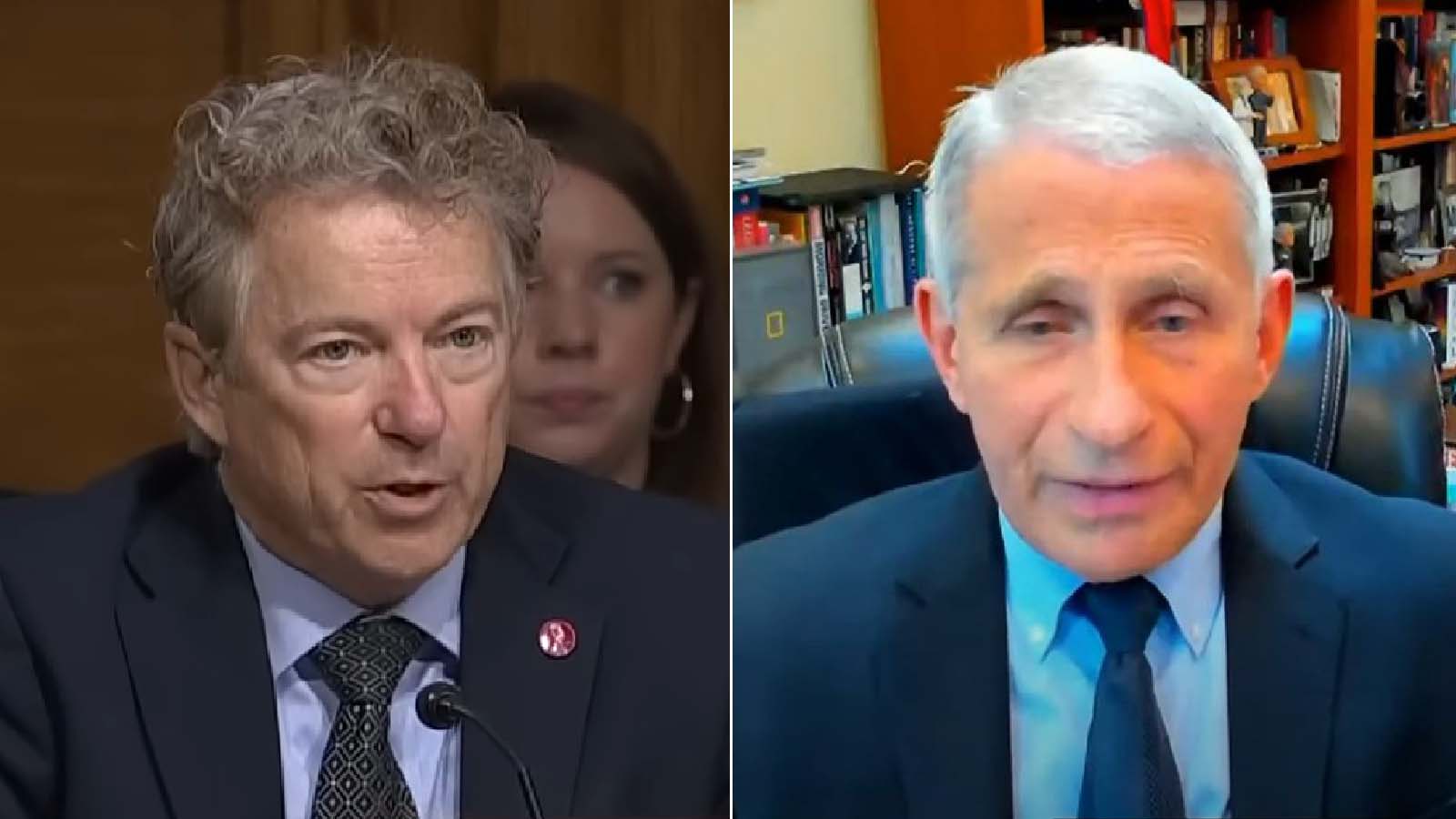 COVID’s lawn gnome, National Institute of Allergy and Infectious Diseases Director Anthony Fauci may be suffering from the Wuhan virus after a couple of vaccines and two or three boosters (Tony Fauci, the Quadruple Vaxed, Double Masked Oracle of Nonsense, Has COVID) but he still appeared before a full committee meeting of the Senate Committee on Health, Education, Labor, and Pensions titled An Update on the Ongoing Federal Response to COVID-19: Current Status and Future Planning. Senator Rand Paul was there waiting.

There was some speculation yesterday that Fauci might be feigning illness to avoid Paul, but thanks to technology, Fauci was there.

Paul hit two major topics. First, he grilled Fauci on why COVID boosters were required for children when there is no evidence that they do any good. Second, he exposed the racket of some NIH scientists receiving what amounts to secret royalty payments from companies they may fund.

PAUL: Dr. Fauci, the government recommends everybody take a booster over age five. Are you aware of any studies that show reduction in hospitalization or death for children who take a booster?

FAUCI: Right now? There’s not enough data that has been accumulated, Senator Paul, to indicate that that’s the case. I believe that the recommendation that was made was based on the assumption that if you look at the morbidity and mortality of children within each of the age groups, you know, 0 to 5, 5 to 11…

PAUL: So there are no studies, and Americans should all know this, there are no studies on children showing a reduction in hospitalization or death with taking a booster. The only studies that were permitted, the only studies that were presented were antibody studies. So they say, ‘if we give you a booster, you make antibodies.’ Now a lot of scientists would question whether or not that’s proof of efficacy of a vaccine. If I give you 10, or if I give a patient 10 mRNA vaccines, and they make protein each time, or they make antibody each time, is that proof that we should give 10 boosters, Dr. Fauci?

FAUCI: No, think that is somewhat of an absurd exaggeration.

Fauci tries to throw out his tiny pigeon chest and ridicule Paul, but it didn’t work.

PAUL: Well, that is the proof that you use, your committees use. That that’s the only proof you have to tell children to take boosters is that they make antibodies. So it’s not an absurdity you’re already yet like five boosters for people. You’ve had, you know, two or three boosters. It’s like, where is the proof? Now, I think there is probably some indication for older folks that have some risk factors. For younger folks, there’s not. But here’s the other thing. There are some risk factors for the vaccine. So, the risk of myocarditis with a second dose for adolescent boys, 12 to 24, is about 80 in a million. This is both from the CDC and from the Israeli study. It’s also in the VAERS study, remarkably similar for boys, much higher for boys than girls, and much higher than the background. The background’s about two per million. So there is risk and there are risks, and you’re telling everybody in America just blindly go out there because we made antibodies. So it is not an absurd corollary to say, if you have 10, in fact, you probably make antibodies. If you get a hundred boosters, alright, that’s not science, that’s conjecture, and we should not be making public policy on it.

Here Paul makes a case that can get you banned from Facebook and Twitter. He points out that the risk of myocarditis in some age groups is exponentially higher than the risk from the disease.

FAUCI: So, Senator Paul, if I might respond to that we just heard in his opening statement ranking member Burr, talk about his staff who went to Israel. And if you look at the data from Israel, the boosts, both the third shot boost and the fourth shot boost was associated with a clear-cut clinical effect, mostly in elderly people, but also as they gathered more data, even in people in their forties and their fifties. So there is clinical data.”

PAUL: But not in children. Well, see, here’s the thing, you’re not willing to be honest with the American people. So, for example, 75% of kids have had the disease. Why is the CDC not including this in the data? You can ask the question, you can do laboratory tests to find out who’s had it and who hasn’t had the disease. What is the incidence of hospitalization and death for children who have been infected with COVID subsequently going to the hospital or dying? What is the possibility, if your kid has had COVID, which is 75% of the country’s had COVID, what is the chance that my child’s going to the hospital or dying?

FAUCI: If you look at the number of deaths in pediatrics, Senator, you can see that there are more deaths in people who have had it, of people have had the disease. Senator, we also know from other studies that the optimal degree of protection… is to get vaccinated after infection. And in fact, showing reinfection in the era of Omicron and the sublineages that vaccination…

PAUL: But you can’t answer the question I ask. The question I ask is how many kids are dying and how many kids are going to the hospital who’ve already had COVID. The answer may be zero, but you’re not even giving us the data because you have so much wanted to protect everybody from all the data, because we’re not smart enough to look at the data. When you released data earlier, when the CDC released the data, they left out the category of 18 to 49 on whether or not there was a health benefit for adults 18 to 49. Why was it left out? When critics finally complained, it was finally included because there was no health benefit from taking a booster between the 18 to 49 in the CDC study.

Now Paul moves onto a subject so touchy that NIH refuses to respond to Congressional requests for the information…and under the Democrats, they get away with it.

PAUL: Another question for you. The NIH continues to refuse to voluntarily divulge the names of scientists who receive royalties and from which companies. Over the period of time from 2010 to 2016, 27,000 royalty payments were paid to 1800 NIH employees. We know that. Not because you told us, but because we forced you to tell us through the Freedom of Information Act. Over 193 million dollars was given to these… 1800 employees. Can you tell me that you have not received a royalty from any entity that you ever oversaw the distribution of money in research grants?

This is what NIH calls a response to a request for information. pic.twitter.com/5ADzSjaKrm

FAUCI: Well, first of all, let’s talk about royalties…

PAUL: No, that’s the question. Have you ever overseen, have you ever received a royalty payment from a company that you later oversaw money going to that company?

FAUCI: You know, I don’t know as a fact, but I doubt it. I would be happy…

PAUL: Well, here’s the thing is why don’t you let us know? Why don’t you reveal… how much you’ve gotten and from what entities? The NIH refuses. Look we asked them. The NIH…we asked them the NIH. We asked them whether or not…who got it and how much. They refuse to tell us they sent it redacted. Here’s what I want to know. It’s not just about you, everybody on the vaccine committee, have any of them ever received money from the people who make vaccines? Can you tell me that? Can you tell me if anybody on the vaccine approval committees ever receive any money from people?

The question that Paul asks is a critical one that demands an answer. What is the relationship between the people making decisions about vaccine usage and the pharmaceutical industry? Billions and billions of dollars are at stake. As we see as more data become available, tens of thousands of lives are lost or severely altered by the adverse effects of vaccines and boosters that we nearly have to take to get on with our lives. The fact that NIH will not respond to such a request by a US Senator, in my opinion, tells you just about all you need to know about that relationship.

FAUCI: You’re interrupting while I’m answering the questions. Sound bite. Number one, are you gonna, let me answer a question. Okay. So let me give you some information. First of all, according to the regulations, people who receive royalties are not required to divulge them, even on their financial statements, according to the Bayh-Dole Act. So let me give you some examples. From 2015 to 2020, I…the only royalties I have was my lab and I made a monoclonal antibody for use in vitro reagent that had nothing to do with patients. And during that period of time, my royalties ranged from $21 a year to 17, $700 a year. And the average per year was $191 and 46 cents.

PAUL: It’s all redacted and you can’t get any information on the 1,800 scientists…

CHAIR (riding to FAUCI’s rescue): Senator Paul, your time is up…

PAUL: We want to know whether or not

CHAIR: Senator Paul, your time is long over-expired. I gave you an additional…

PAUL: …people got money from the people who manufactured the vaccines.

CHAIR: … two-and-a-half minutes (that was mighty big of you, Karen). The witness has responded. We are going to move on.

While the fireworks were missing (for instance, Rand Paul, Once Again, Blows Fauci’s New Old Fearmongering Narrative out of the Water), Paul landed substantive blows on the fake science, dishonesty, and duplicity that have become Fauci’s signature characteristics. He controls the data available to the public, so we can’t make an informed decision. That may be a useful short-term strategy for steamrolling the opposition, but it destroys the trust required of an effective public health bureaucracy (SPOILER ALERT: we don’t). While I understand the thinking behind the Bayh-Dole Act, that is, bureaucrats might be more inventive if they have a stake in what they are developing, the potential for abuse is so astronomical that it can’t be allowed to function without public scrutiny. While they are at it, they should look at the relationship between federal scientists, grants, and future jobs at companies and universities receiving those grants.

As I wrote back in March (Fauci’s Latest Interview Sounds More Like a Swan Song Than a Prelude to a New Fake Crisis), I think Fauci knows the jig is up, and it is time for him to hang up his lab coat and retire. He can read the polls as well as anyone else, and the last thing he wants is to appear before Congressional hearings chaired by Rand Paul or Ted Cruz without a political ally wielding the gavel to save him from disaster.