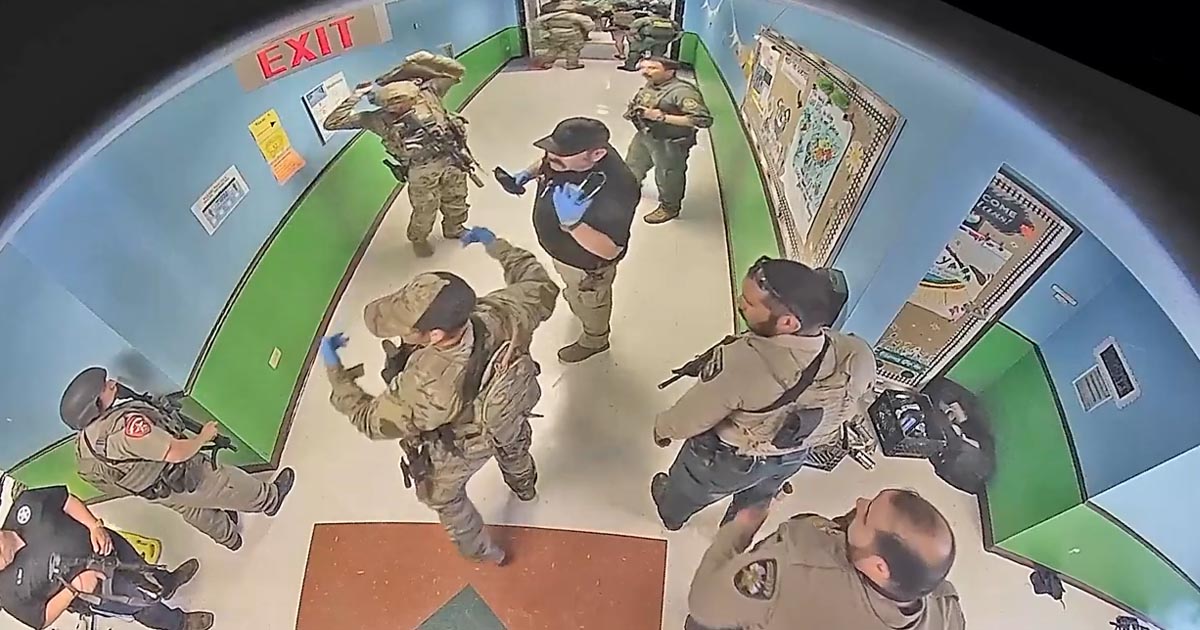 The full 77-minute video has been released from the day 19 children and two teachers were killed at Robb Elementary School in Uvalde, Texas.

The full video, which includes a hallway surveillance camera and a bodycam from one officer, was obtained by the Austin American-Statesman. The outlet posted the four-minute edited collection of excerpts on its website. It posted the full video on its YouTube page.

The edited video begins with the gunman crashing the pickup truck he was driving, and then moving to the school after shooting at witnesses across the street and firing shots in the school parking lot.

WARNING: The following video contains images and audio that viewers will find disturbing.

“The video tells in real time the brutal story of how heavily armed officers failed to immediately launch a cohesive and aggressive response to stop the shooter and save more children if possible. And it reinforces the trauma of those parents, friends and bystanders who were outside the school and pleaded with police to do something, and for those survivors who quietly called 911 from inside the classroom to beg for help,” Statesman reporter Tony Plohetski wrote.

NEW: Recently, I viewed the hallway video from Robb Elementary School and I'm equally as haunted today as I have been. As journalists, we argue for transparency, but rest assured that once it is finally released, it is as wrenching as it seems. https://t.co/M49gOQGLmt

Panic-stricken screams are heard as a woman orders children into their rooms.

The except then continues with Ramos entering the school, peering around a corner to rooms 111 and 112, before sauntering down the hallway holding his rifle.

The video captures one boy emerging from a bathroom. The boy peers around the corner and looks at the shooter, who is farther down the hall, before running away upon hearing the first shots.

Officials have said in the next two and a half minutes, about 100 rounds were fired, according to the Daily Mail.

Three officers approach the classroom warily with drawn weapons. A burst of gunfire erupts, sending the officers running. One officer holds his head as if he was struck.

The clip video then cuts to 19 minutes later, then 31 minutes later, as more officers with guns and a ballistic shield arrive. Officers continue to wait. Four shots are heard.

“They’re making entry,” an officer says, but nothing happens.

At 12:30 p.m. local time, an officer squirts hand sanitizer from a wall-mounted dispenser and rubs his hands together. Officers appear to be discussing alternate ways to enter the classroom.

At 12:50, officers breach the classroom, killing the gunman.

I am also disappointed the victim’s families and the Uvalde community’s requests to watch the video first, and not have certain images and audio of the violence, were not achieved.

Republican state Rep. Dustin Burrows said Tuesday that most sections of the hallway video will be shown to Uvalde community members on Sunday.

However, with the leak of the entirety of the footage, more backlash is sure to ensue.