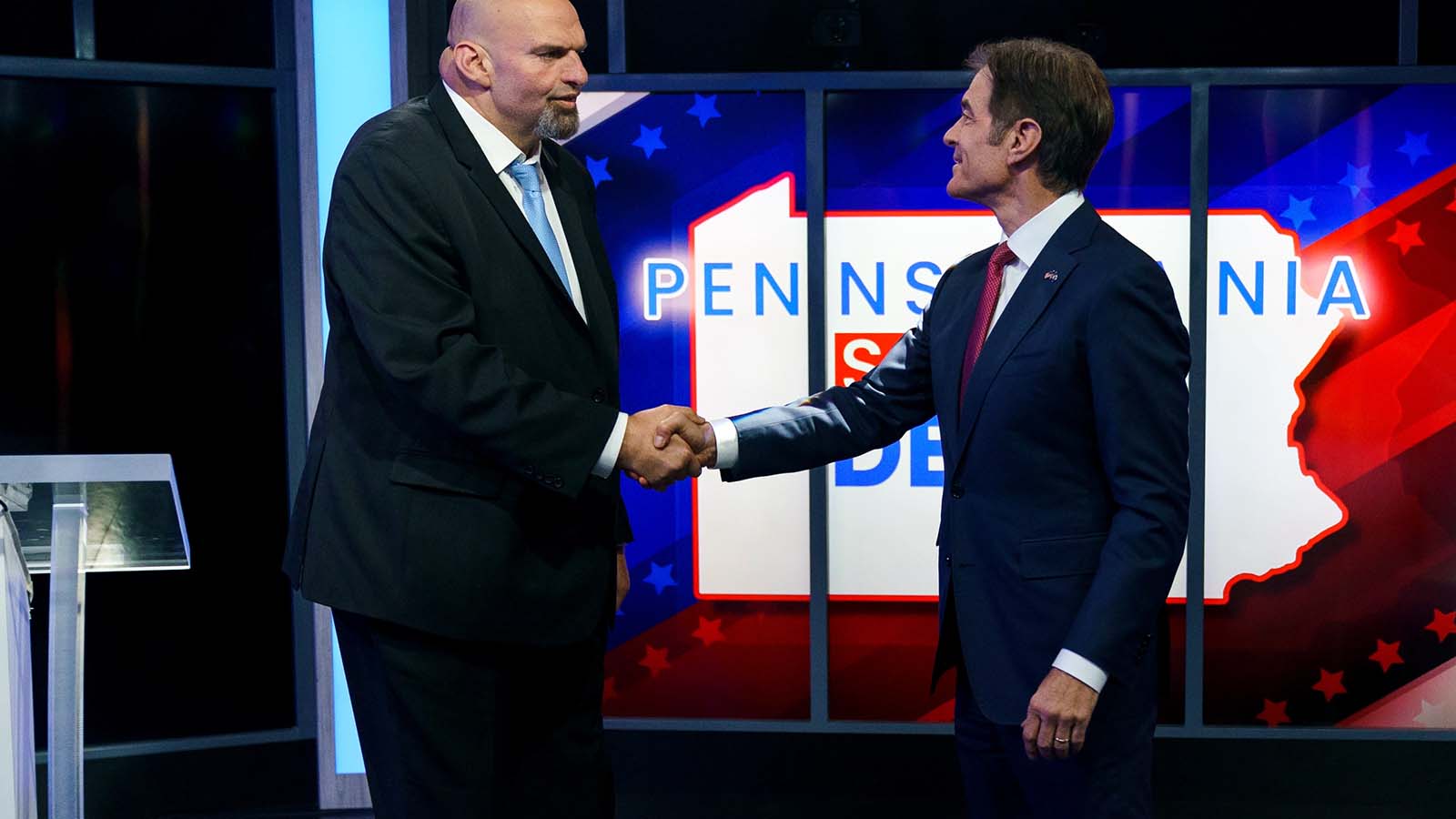 On Tuesday night, Mehmet Oz and John Fetterman finally met to debate after the Fetterman campaign tried to avoid debating Oz, then finally folded under immense pressure from all sides of the political spectrum.

Even before Tuesday’s debate between the two men running to represent the Keystone State in the U.S. Senate, Fetterman’s campaign had scrambled to lower expectations for their candidate, though they may not have lowered them enough.

Moderators began with an explanation of how the captioning system required by the Fetterman campaign for their candidate to participate — due to lingering auditory processing issues following Fetterman’s stroke — would work.

Here's how the closed captioning is going to work in tonight's #PASenateDebate. pic.twitter.com/NLuTtmiLU0

But even with the assistance of the captioning system, Fetterman struggled to respond to questions.

When asked about the federal minimum wage, Fetterman struggled to get through his answer that sought to invoke a “living wage,” calling it a “willing wage” and generally fumbling the answer.

FETTERMAN: "How can a man, you know, with with 10 gigantic mansion has am willing to talk about willing wage for anybody? Imagine a signal mom trying with two children trying to raise with them." pic.twitter.com/hbqePfo8Of

Fetterman didn’t do any better explaining what he meant by a “willing wage,” either.

FETTERMAN: "We all have to make sure that everyone that works is able to, that's the most American bargain…you should be able to live in dignity as well true." pic.twitter.com/8A2po4akGj

And, despite Democrat attempts to make the 2022 midterm elections about abortion, Fetterman didn’t do his party any favors by talking about how he believes “that the choice beleans women and their doctors.”

"I've always believed that the choice beleans women and their doctors." pic.twitter.com/V66csZlyEU

And even on other topics that Fetterman and his campaign should have seen coming and been well-prepared to answer, Fetterman failed to have a new line to respond to the question of why he hasn’t released his full medical records after being less than forthcoming with Pennsylvania voters about his prognosis and medical conditions in the early days following his stroke.

Again, Fetterman leaned on one letter from his doctor saying the candidate was fit and able to serve a six-year term in the world’s greatest deliberative body.

When asked to explain why he won't release his medical records, Fetterman points to the doctor who "cleared" him as "fit to serve."

The doctor that signed his doctor's note is a donor to Fetterman's campaign. pic.twitter.com/3u6scM3AVQ

As Townhall reported at the time Fetterman’s campaign released the letter, the doctor happens to be a significant donor to Democrats, including more than $1,000 given to Fetterman in this campaign.

The debate moderators also asked Fetterman why his position on fracking had changed, displaying a 2018 quote in which Fetterman said he didn’t support fracking.

Unbelievably, moments after being read his own quote saying "I don't support fracking at all," John Fetterman says "I've always supported fracking." pic.twitter.com/OglPqOuKAd

Fetterman, however, responded to this question by claiming he had “always supported fracking” despite the preceding quote contradicting him and his otherwise stated support for a fracking moratorium in the Keystone State.

On other answers, Fetterman’s attempted attacks against Oz just completely fell apart, as seen here when seemingly trying to invoke some situation in which Oz received a $50 tax break:

Fetterman attacks Dr. Oz for taking a "$50 tax break" as he breaks down in an effort to complete his answer. pic.twitter.com/ePC4MdW25O

As the debate carried on, Fetterman seemed to struggle more with mixing up his words, struggling with “vogotional schools” and “wayjuhlottaway.”

FETTERMAN: "Going to those kind of vogotional schools, able to create a career to rai—to way, excuse me, to wane wayjuhlottaway high salary and supporting to reduce those costs are critical too." pic.twitter.com/3P6BNsYtwM

At other points in the debate, Fetterman interrupted Oz with seemingly non-sequitur outbursts, as he did here exclaiming “you roll with Doug Mastriano!”

John Fetterman just had an outburst interrupting Dr. Oz, seemingly having nothing to do with what he was saying:

"You roll with Doug Mastriano!" pic.twitter.com/SQTJKXPb2W

And again interrupting with “You want to cut social security” while Oz was delivering his closing statement:

Oz, however, rolled with the unorthodox format and often less than coherent points from his opponent. The GOP nominee landed punches on the Democrats’ open-border policies for creating “a humanitarian crisis” and “making every state a border state” while allowing deadly fentanyl to stream into the country.

Oz also landed a solid, more personal attack on Fetterman over his lack of apology for the time he, as mayor of Braddock, pulled a shotgun on an unarmed, innocent black jogger believing him to be involved in a crime after Fetterman thought he heard gunshots. Like several other issues, Fetterman’s answer was… not good.

OZ: "Why haven't you apologized to that unarmed, innocent black man, who you put a shotgun to his chest?"

FETTERMAN: "I made the opportunity to defend our community as the chief law enforcement officer there." pic.twitter.com/5BBEGW2WPH

If the immediate response from NewsNation (whose parent company Nexstar hosted the debate) is any indication of the general reaction to the debate, Fetterman’s campaign — as mentioned previously — did not lower expectations enough before Tuesday evening.

"We said this would be unlike any debate you have ever seen, and we perhaps understated just how different this would be. Clearly, the biggest issue was John Fetterman's health and his ability both to comprehend speech and then to speak coherently on the issues of the day." pic.twitter.com/s6PqB7PQNo

If anything, the debate proved the concerns noted by NBC News following their recent sit-down interview with Fetterman and showed voters that a doctor’s note declaring him ready to head to Senate might be spinning a bit too rosy a picture of the Democrat nominee for U.S. Senate.