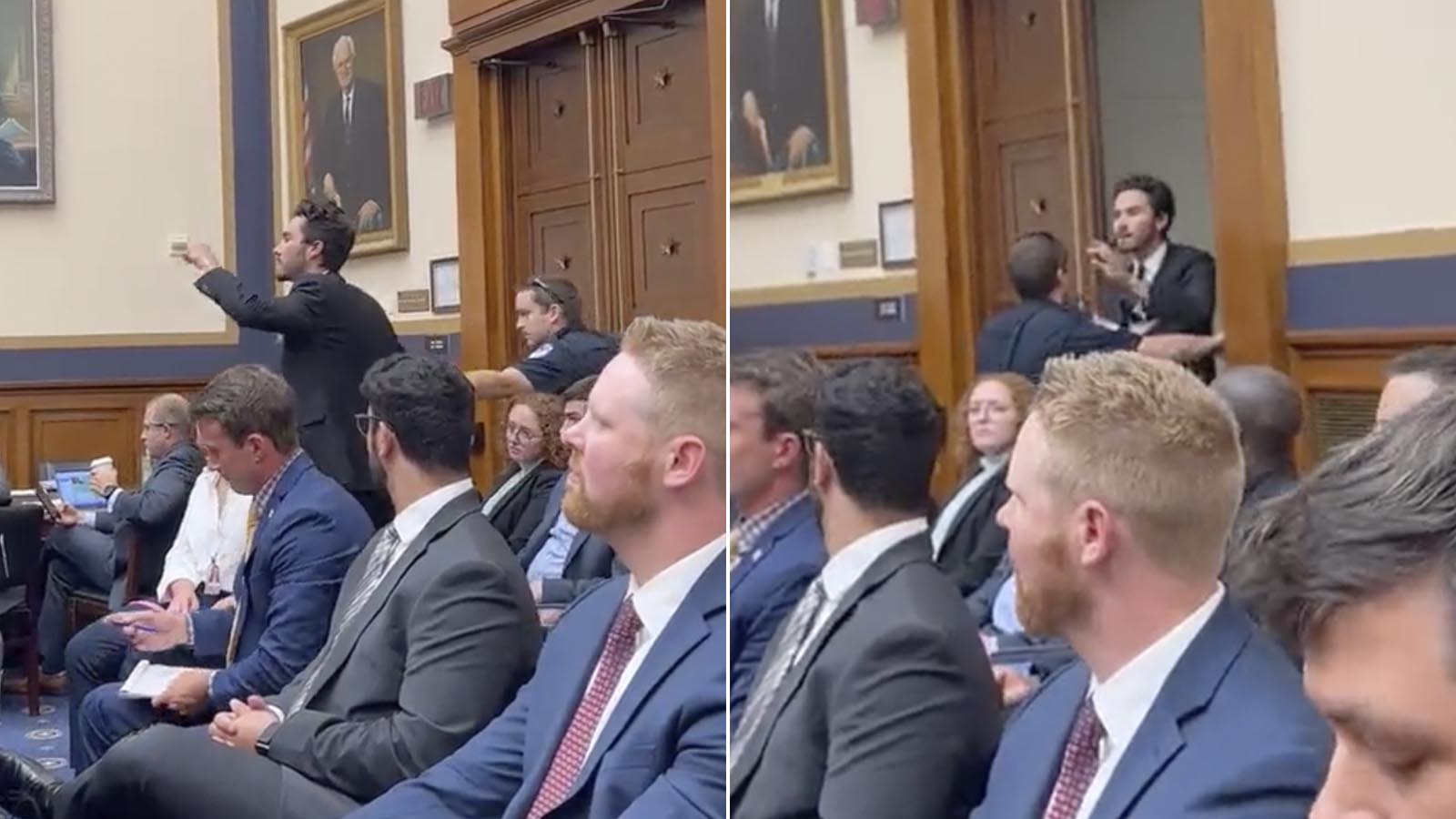 During a Wednesday congressional hearing held by the House Judiciary Committee on banning so-called assault weapons, gun control activist David Hogg had to be escorted out by police for his outburst interrupting the hearing.

The officer lets Hogg carry on for a moment before making him leave, as she tugs on his arm to remove him while he still shouts out his remarks.

Hogg, who founded March for Our Lives (MFOL), stood up to interrupt Rep. Andy Biggs (R-AZ) and attack Republican talking points by claiming they were “reiterating the points of mass shooters” and claimed that “guns are coming from the United States of America, they are not coming from Mexico.” He once again repeated his claim that Biggs “is reiterating the points of a mass shooter.” He also went with another Leftist talking point that Republicans are the ones “perpetuating violence.”

Gun control activist David Hogg has an outburst during a House Judiciary Committee hearing on gun violence and is escorted out by police. pic.twitter.com/dKLX8jFLYv

Chairman Jerry Nadler (D-NY) can be heard calling for police to escort Hogg out of the hearing.

Hogg himself shamelessly posted a video of his interruption to his own Twitter account, as well as an exchange after he was escorted out of the hearing, in which he claims “Gun lobbyists can try & birddog us, stop us, yell at us.”

Gun lobbyists can try & birddog us, stop us, yell at us. The difference between us & them is we’re just young ppl defending our right to live. They’re defending weapons of war and their bank accts.

(P.S. @disney, get ur lawyers on this guy, I played the lion king throughout 😉) pic.twitter.com/sBC5hDRzkj

This is not the only cry for attention that Hogg has gotten caught up in. Last month, as I covered, Hogg tweeted a false claim at Sen. Marco Rubio (R-FL) that the senator would not meet with Hogg because he “trigger[s]” the senator.

Hogg ultimately deleted the tweet and apologized, but not before Rubio’s staff quickly caught on and set the record straight that a meeting had already been scheduled. The meeting was canceled due to Hogg’s false claims.

Despite Hogg’s incessant promotion of his gun control events throughout the country last month, the organization also blocked a pro-life Democrat who believes in gun control from holding an official event, due to the abortion issue. Trevor Wild, who is a distributor organizer for MFOL doubled down on such refusal, even temporarily locking down his Twitter account as a way to troll pro-life Democrats.

“David Hogg” is trending on Twitter a result of his outburst.

While both President Joe Biden and Vice President Kamala Harris have repeatedly called for passing such a ban, Democrats are in disarray over the matter, as even Democratic lawmakers know it is unlikely to pass.