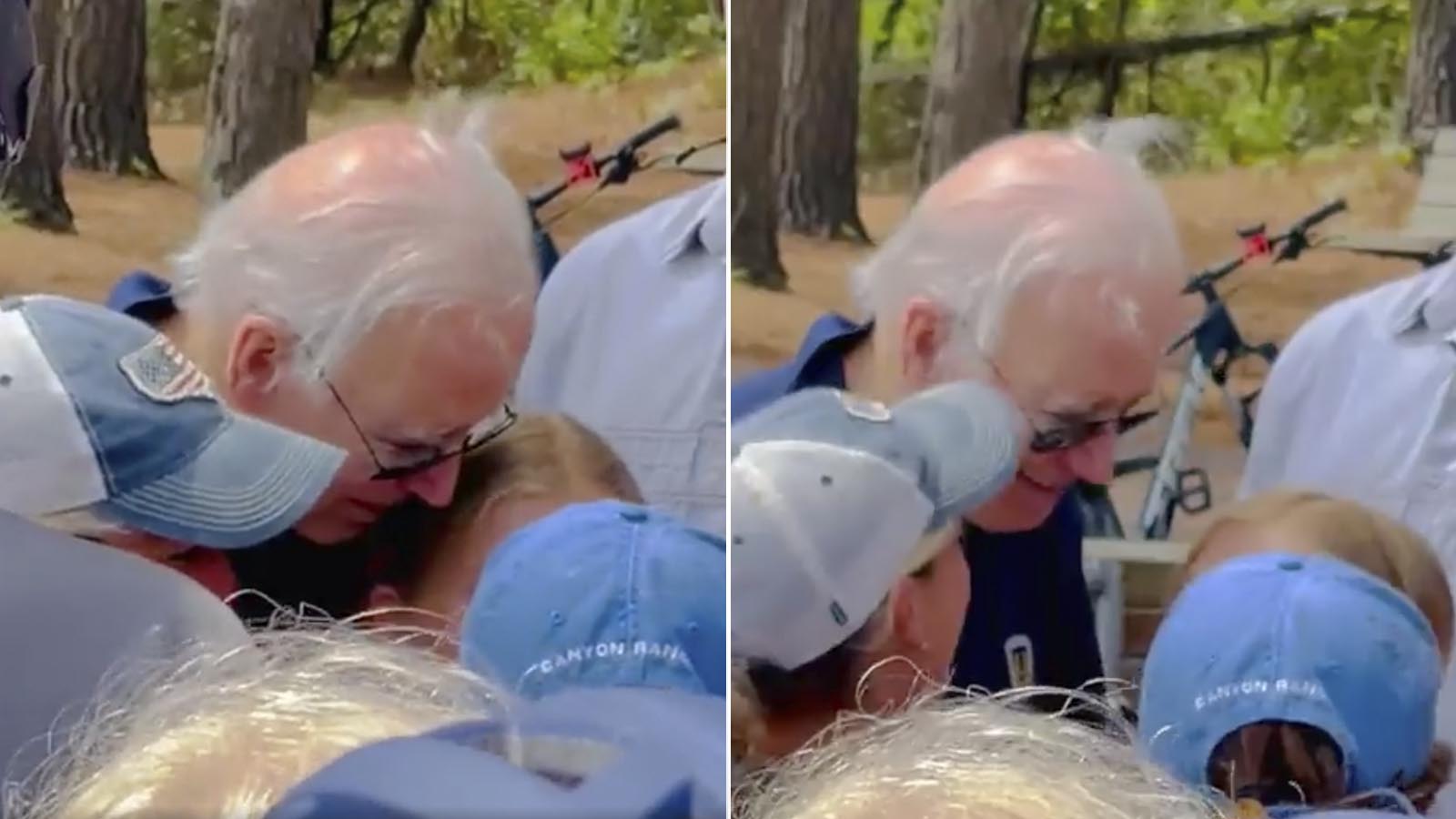 President Joe Biden has long been known for his questionable actions around young children, and a new video provided yet another example of this fact.

In the video shared on Twitter, Biden can be seen standing next to a young girl on what appears to be a bike trail in the woods.

After a few seconds, he seemingly leaned down and sniffed the girl’s head before whispering something in her ear. Meanwhile, a man standing next to the girl stared into the distance with a straight face.

Dad ran into Joe on a biking trail in Delaware and got a live sniffing video lmfao pic.twitter.com/qz9KuEzN9E

Many social media users responded with disgust after seeing the video.

“What mom would allow her child close to him,” one user questioned.

What mom would allow her child close to him

Meanwhile, multiple users noticed that the girl appeared to pull away as Biden got closer to her.

whatever he whispered to her made her run away

I notice the children he is standing to close to and leans in on creepily pull away. Their natural instincts that something feels off seems to kick in. Watch how she pulls away the moment he puts his head down on hers to whisper/sniff whatever he is doing.

Sadly, this is far from the first time Biden has been captured in the midst of an inappropriate interaction with a young child.

While swearing in Republican Sen. Jim Risch during his time as vice president, Biden stroked the hair of Risch’s daughter and asked to take a photo alone with her. He was clearly uncomfortable with the idea.

“Dad’s going to stand pretty close,” Risch said. Biden went on to comment about what he would do “if I was young.”

In this clip, Biden swears-in (R) Senator Jim Risch. During photographs, Biden touches Risch's daughter, specifically asking to take a photo alone with her. You can hear Risch say "Dad's going to stand pretty close." (I wonder why?) Biden even jokes and says, "If I was young…" pic.twitter.com/LLqJ4guU0q

Mills also shared a compilation of Biden telling young girls they are not allowed to date until they are 30 years old.

Is it a joke? A rule. A requirement. A demand?

Why shouldn't a young women be able to date until she's well-past maturity?

Former VP Biden has said it so much, a montage exists. pic.twitter.com/SdWqn8mSIa

More recently in May 2021, Biden singled out the young daughter of a veteran during a speech at a Virginia military base.

“I love those barrettes in your hair,” Biden said. “Man, I’ll tell you what, look at her she looks like she’s 19 years old, sitting there like a little lady with her legs crossed.”

Joe Biden looks at a little girl in the audience, the daughter of a veteran, and says "I love those barrettes in your hair. Man I’ll tell you what, look at her she looks like she's 19 years old sitting there like a little lady with her legs crossed." pic.twitter.com/DbH8ihG2Mj

When it comes to interacting with children, there is a boatload of evidence suggesting Biden is downright creepy. He no longer deserves the benefit of the doubt.