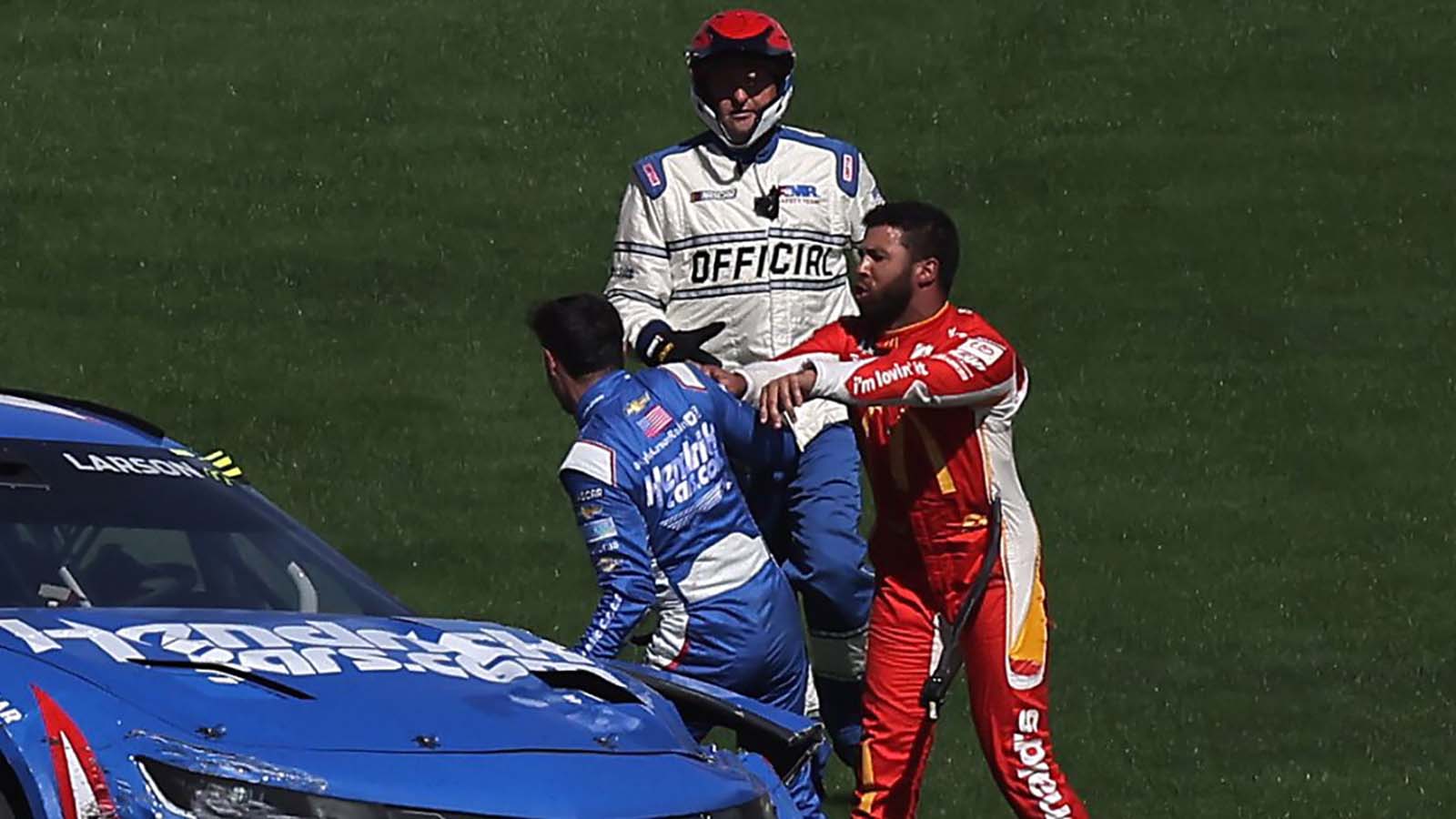 The court of public opinion condemned NASCAR driver Bubba Wallace after a Sunday incident at the Las Vegas Motor Speedway that started with a collision of metal and ended up with pushing and shoving.

Wallace then appeared to hook Larson’s car on purpose. Larson’s car spun into the path of Christopher Bell, putting both out of commission for the race.

Wallace climbed out of his wrecked car and stalked toward Larson, yelling at him and pushing him. Larson moved away and responded with one ineffective push before others intervened and Wallace stormed away after one last shove.

Bubba Wallace is NOT HAPPY with Kyle Larson.

Some pushes and shoves after they wreck. #NASCAR pic.twitter.com/aaAn0idrJp

Wallace also appeared to shove an official after he left Larson.

ICYMI — Here is the moment that Wallace put his hands on a #NASCAR official during his spat with Kyle Larson pic.twitter.com/IYagPL2o8g

NASCAR said it will review the incident and issue any penalties next week.

On social media, Wallace’s actions were denounced as “absolutely unacceptable” and “disgusting and horrendous,” with one Twitter user writing, “There is no debating this loss of maturity and temper.”

That is is just disgusting and horrendous to see.

Is @BubbaWallace going to be arrested? https://t.co/DxSsj1R7Nq

“I’m smart enough to know how easily these cars break, so when you get shoved into the fence deliberately like he did, trying to force me to lift, the steering was gone,” Wallace said. “It just so happened that he happened to be there.”

“Larson wanted to make a three-wide divebomb, but he never cleared me and I don’t lift,” he said. “So I know I’m kind of new to running up front, but I don’t lift. So I wasn’t even at a spot to lift and he never lifted, either, and now we’re junk. Just a piss poor move of his execution.”

Asked what he wanted to communicate to Larson, Wallace replied, “He knows.”

“He knows what he did was wrong. He wanted to question what I was doing, and he never cleared me,” Wallace said.

Hear from @BubbaWallace after his incident with Kyle Larson. #NASCAR pic.twitter.com/XUMPs2sRsf

Larson said he was not surprised Wallace got hot under the helmet.

“I obviously made an aggressive move into [turn] three and got in low and got loose and chased it up a bit,” Larson said. “He got to my right front, and it got him tight and into the wall. I knew he was going to retaliate. … He had a reason to be mad, but his race wasn’t over until he retaliated.

“It is what it is. Just aggression turned into frustration and he retaliated.”

Larson said he thinks Wallace will realize his error.

“I’m sure with everything going, he’ll know that he made a mistake in the retaliation part and I’m sure, you know, he’ll think twice about that next time,” he said, adding that he expected a fight as he saw Wallace approach his car.

“I saw him walking over, so I figured he would do something. … He had every right to be upset. I would rather him do that than tear up our cars in a dangerous manner,” Larson said.

Joey Logano won the race in Vegas to earn a spot in the Championship 4 in Phoenix.