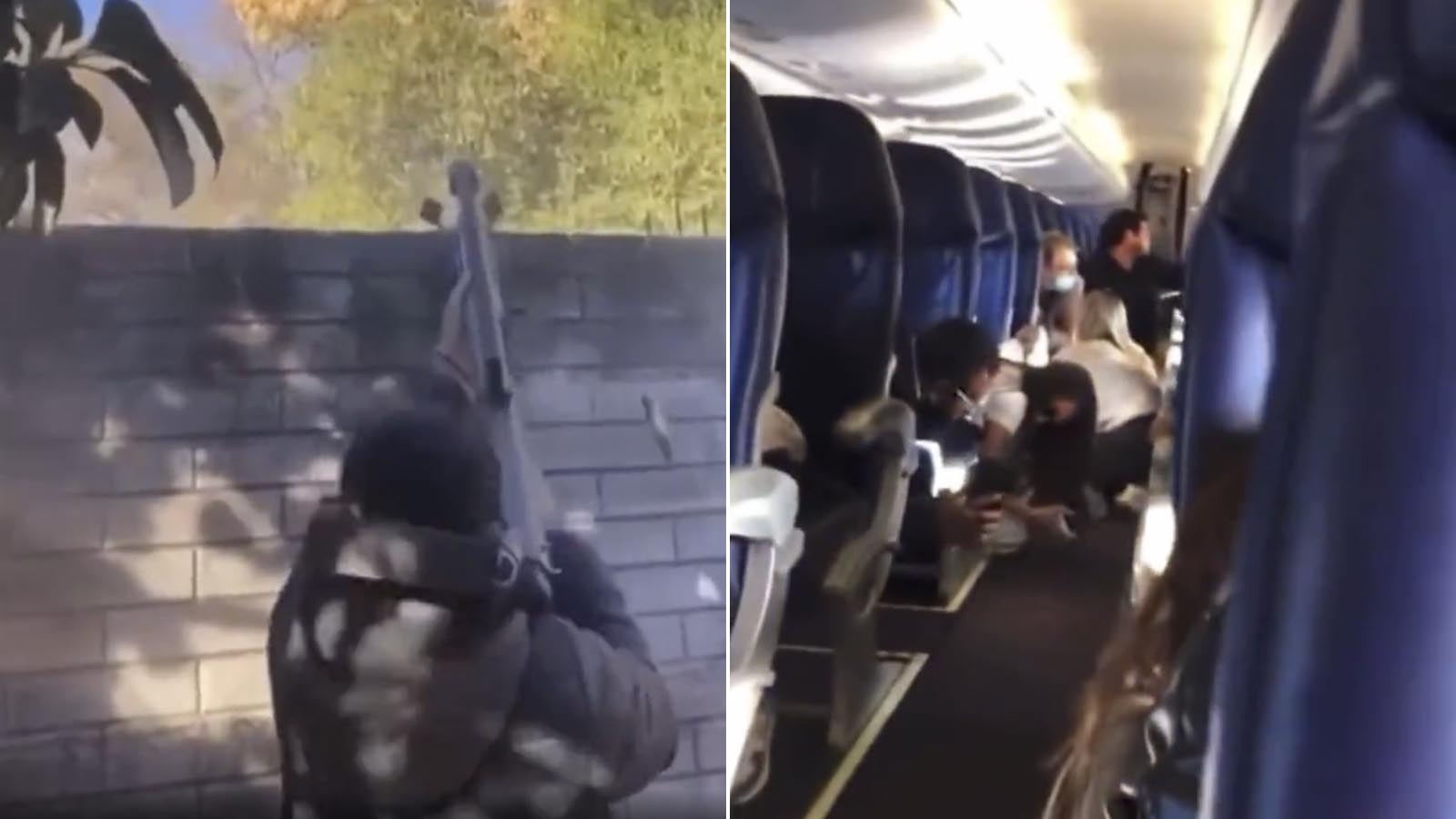 A significant Mexican military force swooped into the city of Culiacan to take Ovidio Guzman into custody. The Mexican army ordered Blackhawk helicopter gunships to attack a convoy of 25 cartel vehicles – some sporting machine guns.

A Mexican military aircraft conducted a strafing run against Sinaloa Cartel members, according to The Drive.

War has broken out between Mexican Defense Forces and the Sinaloa Cartel in Culiacan in response to the arrest of El Chapo’s son.

More footage will be added in the thread below as it emerges. pic.twitter.com/d18O2Tbevu

The son of imprisoned drug kingpin “El Chapo” has been arrested by authorities in Mexico. The pre-dawn military operation sparked gunfights and roadblocks across the city where the Sinaloa drug cartel is headquartered. @mattriversabc reports. https://t.co/47JbkrfG9v pic.twitter.com/PfUuUw98h3

The Sinaloa Cartel set the city of Culiacan on fire in an attempt to force Mexican authorities to free Guzman.

According to Fox News, “The violence became so heavy that Sinaloa Gov. Ruben Rocha said cartel members showed up at local hospitals attempting to kidnap doctors to take them back to the front lines and treat wounded fighters.”

Rocha said, “It got to the point that at one moment, the doctors were saying, ‘We’re getting out of here.'”

El Pais reported, “Witnesses who spoke to El Pais paint a picture of terror, where packs of armed criminals, on motorcycles or on foot, played cat and mouse with the authorities. Roberto, a painter who left home shortly before 10 a.m. on Thursday, said the criminals seized his car at gunpoint: ‘I don’t know what a war zone is like, but I think it’s the same thing,’ he said.”

The cartel set cars, buses, and tractor-trailers on fire as roadblocks across the city. The drug cartel blocked 19 roads and highways in Culiacan. The cartel wanted to prevent the Mexican military from transporting Guzman to the Culiacan airport.

Two military planes landed at the airport and deployed more troops to secure the airport.

Law enforcement was able to transport Guzman to the airport, but the cartel launched a last-ditch offensive. The Sinaloa Cartel shot at a military plane and a commercial airliner in an effort to stop Guzman from being flown out of the city.

The Aeromexico airliner attempted to take off from the runway, but was hit by gunfire. Passengers threw themselves to the floor of the plane to dodge the gunfire. The commercial airliner was forced to retreat to the terminal.

The New York Post reported that the plane’s engine had been hit during the shooting, which caused a leak. None of the passengers were injured.

The Sinaloa Cartel grounded two military aircraft after the planes were hit with “a significant number of impacts,” Sandoval said. The cartel soldiers were reportedly firing Barrett .50 caliber anti-materiel rifles at the planes.

Sinaloa Cartel firing a .50 Cal Barrett anti-materiel rifle at a plane of the Mexican Air Force near the Culiacán Airport following the arrest of El Chapo’s son Ovidio pic.twitter.com/tF7PX6aeDE

In an act of terrorism, a war has broken out between Mexican Defense Forces and the Sinaloa Cartel in Culiacan in response to the arrest of El Chapo’s son. Where the cartel has now been shooting at commercial airliners with 50-caliber weapons; some arguing provided by the ATF. pic.twitter.com/GDjOQ8VKyl

Mexican authorities snuck Guzman into a military helicopter and flew the 32-year-old drug kingpin to Mexico City. Guzman is reportedly in a maximum-security prison near Toluca.

“Guzman was indicted by the United States on drug trafficking charges in 2018. According to both governments, he had assumed a growing role among his brothers in carrying on their father’s business, along with long- time cartel boss Ismael ‘El Mayo’ Zambada,” according to CNBC.

Foreign Affairs Secretary Marcelo Ebrard confirmed the Mexican government received a 2019 request from the United States for Guzman’s arrest, and that the U.S. wants to extradite the suspected drug lord.

Joaquin “El Chapo” Guzman is serving a life sentence at a Colorado supermax federal prison after being convicted of criminal enterprise and cocaine distribution in 2019.

President Joe Biden is scheduled to travel to the southern border on Sunday – his first such visit since taking office. Biden is set to visit Mexico next week for the North American Leaders’ Summit – which will include meetings with Canadian Prime Minister Justin Trudeau and Lopez Obrador.