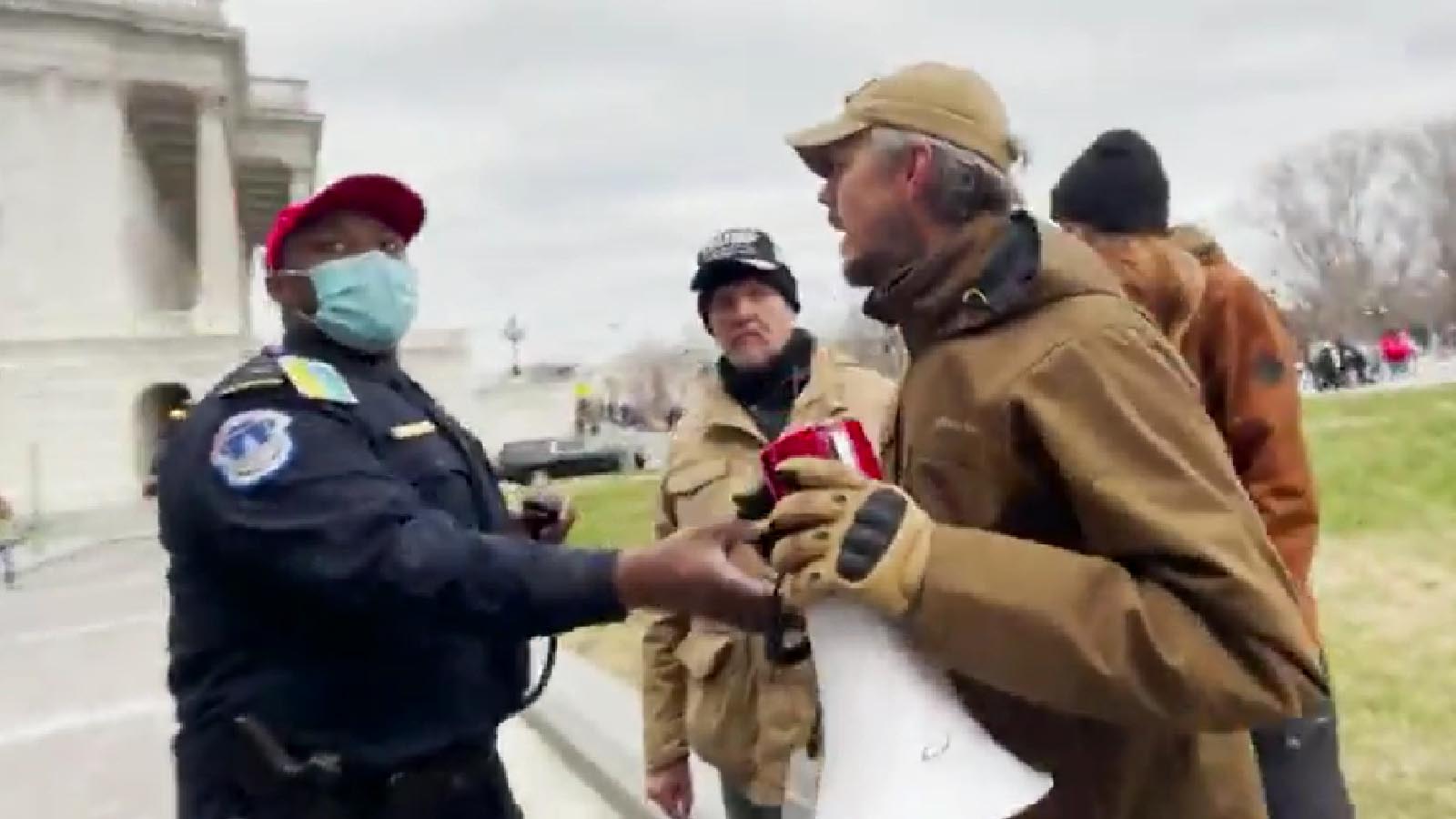 Video footage widely circulated in 2021 that shows a Capitol Police lieutenant asking members of the Oath Keepers for rescue help at the U.S. Capitol blows a hole in the seditious conspiracy charges brought against the group by federal prosecutors, two defense attorneys say.

In the footage, Lt. Tarik Khalid Johnson asks a group of men to help him get more than a dozen trapped Capitol Police officers out of the Capitol and through a tightly packed crowd of protesters on the building’s east steps.

It was widely reported in January 2021 that Johnson wore a red Make America Great Again cap on Jan. 6 as a ruse to “trick” supporters of President Donald Trump into helping him rescue fellow officers from the Capitol. He was later suspended for wearing the MAGA cap. Johnson is a registered Democrat, according to online records.

The men who answered the call to help were members of the Oath Keepers, a nationwide group of current and former military, law enforcement, and first responders who have been targeted by federal prosecutors for allegedly conspiring to attack the Capitol on Jan. 6, 2021.

The video is at least the second example showing the Oath Keepers coming to the aid of Capitol Police inside the building that day.

Would a group of men seditiously plotting an attack on the Capitol, allegedly to prevent certification of Electoral College votes, rush into the building to extract police trapped inside—all while being followed by a filmmaker?

Prosecutors “just keep ignoring the self-contradictions in their stories.”

The video footage was shot by part-time filmmaker Rico La Starza. One of several versions of the video footage posted online includes an introduction by La Starza. He said the video shows “me helping a group of Oath Keepers help Capitol Police get out. They looked scared and tired.”

Attorney Brad Geyer said the footage should open a lot of eyes about the Oath Keepers.

“America would probably find it surprising, based on how the Oath Keepers had been framed in these now seven superseding indictments,” said Geyer, who represents Oath Keeper Kenneth Harrelson. “But as far as reality is concerned, this is just another day at doing security details.”

In the middle of the afternoon on Jan. 6, 2021, Johnson appears on a terrace area near the bottom of the east stairs at the U.S. Capitol. He approaches a group of Oath Keepers for help.

“If you guys can help me save some of the guys,” Johnson says to two Oath Keepers. “If you can help me get aside these people, I’d appreciate it. I just need to get these other officers out. They’re scared.

“We’re getting beat up, but the people who didn’t go for help are laughing at us.”

“I can do that. I can help,” says an Oath Keeper named Michael. Turning around to face Johnson, Michael appears to flash a badge and again says, “I can help.”

Johnson hands Michael a megaphone and they go to the east stairs leading up to the Columbus Doors.

“Just let me hold onto you,” Johnson says as they ascend the steps.

The two Oath Keepers shield Johnson and walk in a “stack formation” up the steps on the east side of the Capitol. Johnson radios ahead to say some of the demonstrators were walking him through the crowd toward the entrance.

Some people in the crowd express support for the trio. “I’m with you, brother,” one says. “Thank you, sir!” says another.

“Stand aside, make a hole. We’re Oath Keepers, stand aside!” he says as the group reaches the historic Columbus Doors.

Two other groups of Oath Keepers that used the same stack formation to navigate the dense crowds and enter the Capitol were accused by prosecutors of using this military tactic as part of their alleged plan to attack the building and stop the certification of Electoral College votes.

“Watch out, man. They’re trying to get the cops out,” a nearby protester says.

They work their way through a tightly packed crowd of protesters inside the Columbus Doors and through the interior double doors.

A short time later, Michael appears at the doors with a megaphone. He advises the crowd—along with some agitators near the doors—to back up and let them through.

“[Expletive] you!” one agitator shouts.

“Back up and make a [expletive] hole!” the Oath Keeper retorts.

Michael stretches his arms out and blocks the crowd, pushing backward.

As Capitol Police start to exit the Columbus Doors, they receive pats on the back, hugs, and comments such as, “Thank you, sir!” and “Good job!”

The Wall Street Journal posted the rescue video with a story about Johnson on Jan. 15, 2021. The Journal referred to the Oath Keepers as an “anti-government militia group,” a term the group flatly rejects.

“We were there as a force of good,” Oath Keeper Roberto Minuta, who was also part of the rescue operation, told The Epoch Times. “I was with the Oath Keepers, and we’ve always done positive work, disaster relief, protecting businesses, aiding people that need help.”

“We have no history of violence and no intention of violence,” said Minuta, one of nine Oath Keepers charged with seditious conspiracy after Jan. 6, 2021. “We are strictly there to protect the First Amendment because we can’t have one side that’s permitted to have free speech and the other that’s not. That’s not America. That’s not what this country was founded on, and when that’s gone, my children’s future looks grim.”

Oath Keepers founder Elmer Stewart Rhodes III told The Epoch Times his group is hated because it reminds those who took an oath of their duty to disobey unlawful orders.

Geyer said the rescue of the Capitol Police officers was no surprise to him.

“The Oath Keepers have been working as a volunteer auxiliary police force around the country now for well over a decade,” he said. “It’s what one might expect that the police would seek Oath Keepers’ assistance if there’s a crowd-control issue or an issue related to police movements, or if the police needed assistance for whatever reason.

“They were there to support law enforcement. And so when their assistance is requested by law enforcement, just like every other time, they’re happy to respond. It’s what they view their role to be.”

In another Jan. 6, 2021, incident, a group of Oath Keepers reported that they had intervened in a potential conflict between an angry crowd of protesters and Capitol Police officer Harry Dunn.

Rhodes said Dunn “was armed with an M4/AR-15 and was very agitated, scared-looking, and was surrounded by a bunch of yelling Trump supporters. The Oath Keepers jumped in between and dialed it all back, calmed him down, calmed the Trump supporters down, and escorted that black police officer to other Capitol police officers and hooked him up with his buddies. So that he wasn’t by himself.”

Rhodes said he mentioned the race of the officer because his group is often falsely maligned as racist and composed of white supremacists.