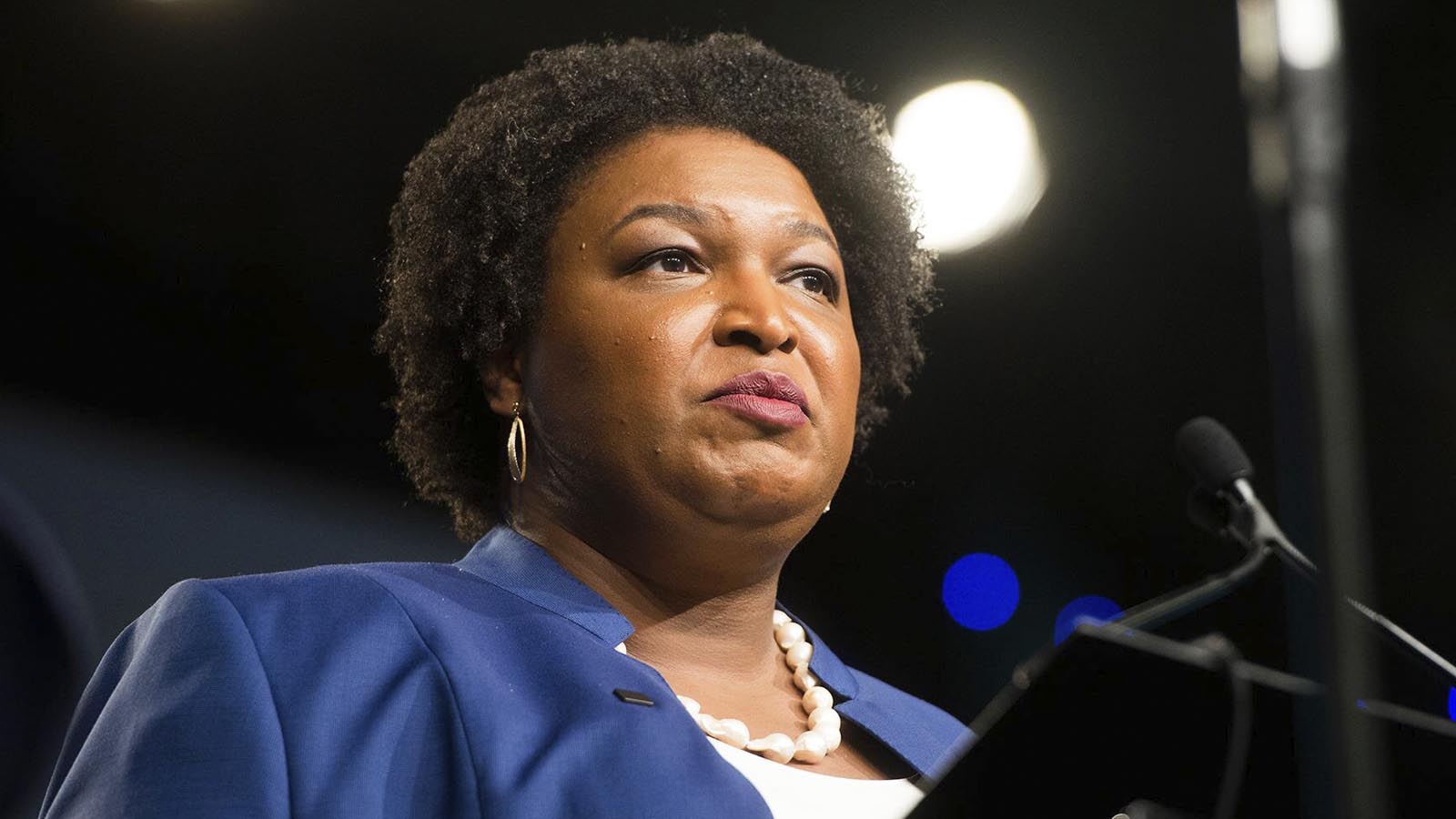 We’re now about three and a half months out from the upcoming November elections, where voters will not only cast ballots in the midterms but gubernatorial races across the country, including in Georgia. The race is a re-match from 2018, with Gov. Brian Kemp (R) facing Stacey Abrams (D).

While the race was, until recently, considered a “Toss-Up,” Cook Political Report has now shifted the race to the “Lean Republican” territory. Sabato’s Crystal Ball and Inside Elections had already changed their ratings to “Lean Republican” and “Tilt Republican,” respectively. 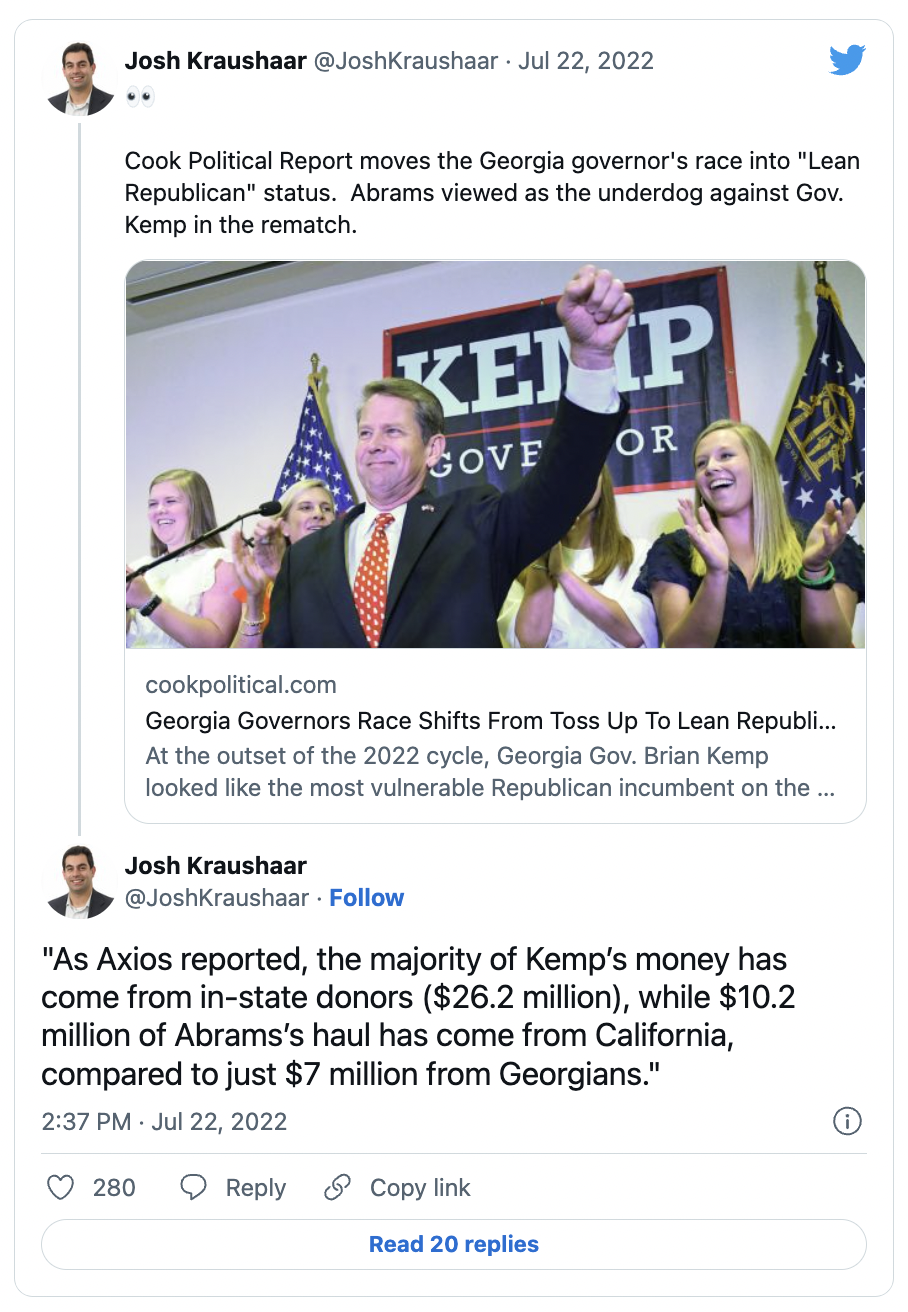 Particularly telling for Kemp is that a majority of his donations have come from Georgia, while a significant amount of Abrams’ donations are coming from California. Axios published a helpful chart last week.

That Axios report where the chart is included noted that “If the trend holds, Abrams would be the only Georgia gubernatorial nominee from either party since at least the 1990s to receive a majority of campaign funds from out of state, according to an Axios analysis of campaign finance records.”

It also points to how this could be a liability for Abrams:

The intrigue: Republicans see out-of-state support as one of Abrams’ biggest liabilities.

The Kemp campaign has certainly jumped on highlighting these figures, calling on voters to “Help us BEAT Abrams & her blue-state buddies.”

Stacey Abrams is funded by liberal states like California and New York. On the other hand, @BrianKempGA is backed by GEORGIANS. Help us BEAT Abrams & her blue-state buddies.

As Spencer highlighted earlier on Friday, this is a tactic for other vulnerable Democrats, who have received funds from out of state, including Georgia’s Sen. Raphael Warnock.

This rating change also comes as a Cygnal poll released on Wednesday shows Kemp ahead of Abrams with his 50 percent to her 45 percent.

In addition to highlighting Kemp’s higher support, a memo from Cygnal noted that “Hispanic and Asian voters are shifting toward Kemp” and that “African-American voters are not a homogenous voter block for Abrams,” as one-quarter of such voters under 35 are supporting Kemp.

The memo points out that “These younger African-American Georgians are overwhelmingly concerned about the cost of gas and rising costs without a pay increase” and “They also are more likely to blame Biden for inflation because one-third of them have an unfavorable opinion of the President.”

Kemp also has more support, at 94 percent, among Republicans than Abrams does among Democrats, which is at 92 percent. The Republican governor is also increasing his “very favorable” rating.

The poll was conducted July 5-7, 2022 with 1,200 likely general election voters. It has a margin of error of plus or minus 2.65 percentage points. It’s with pointing out that there was an oversampling of minority voters from July 5-11, 2022, with higher margins of error.