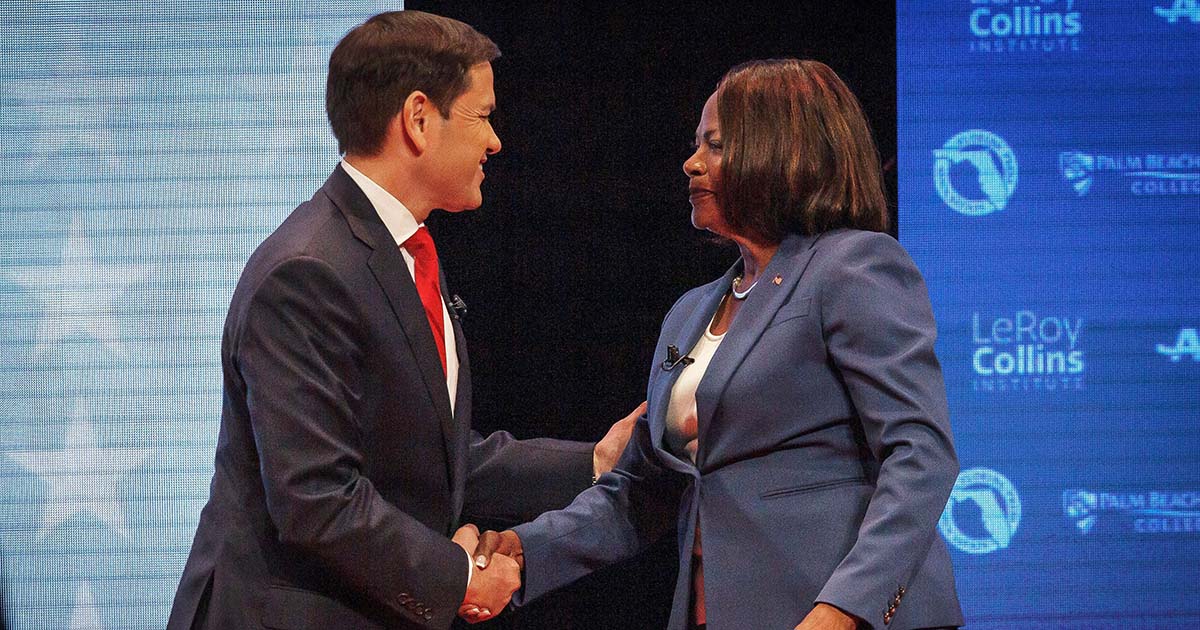 On Tuesday night, Rep. Val Demings (D-FL) debated Sen. Marco Rubio (R-FL), as she seeks to stop the incumbent senator from winning a third term. During her performance, she showed off her true colors as a radical and desperate candidate running in a state that’s been turning increasingly red.

Rubio showed off his debate skills, especially early on, when the moderator referenced the American Rescue Plan Act (ARPA) and the resulting record-high inflation, which is particularly bad in Florida. The candidates were specifically asked what can be done to help Florida families.

“I think the first thing we’ve got to start doing is stop sending that kind of money,” Rubio insisted about the trillions of dollars injected into the economy, “adding we already did two pandemic reliefs, this came on top of it.” Pointing to Demings, Rubio mentioned “they were warned, Democrats were warned, by Larry Summers, by other Democratic economists, you do this, you’re gonna fire up inflation.”

The senator also spoke to the need of how “we’ve gotta to produce American oil again,” pointing to how under the Biden administration we are producing a million barrels less and begging Saudi Arabia, Iran and Venezuela for oil. He was particularly critical of President Joe Biden depleting the Strategic Oil Reserves to critically low levels. “Our oil reserves do not exist to win midterms,” Rubio pointed out. “They exist to help this country in an emergency or in the midst of a storm.”

Senator @marcorubio blasts Democrats' obsession with spending: "The first thing we have to stop doing is spending that kind of money."#FLSenDebate pic.twitter.com/9T8JrkYwM2

When it was her turn to answer, Demings began not with substance, but by attacking Rubio. “Of course the senator, who has never run anything at all but his mouth would know nothing about helping people and being there for people when they are in trouble,” she claimed.

Demings defended her vote for ARPA, as a way to fix the Paycheck Protection Program (PPP) loans. Rather than answer for ARPA’s role in inflation, Demings charged “you played politics, senator, and you did not do that,” going on to emphasize her claim that Rubio has not been doing his job.

During the back and forth Demings went on to claim that Rubio was lying “in order to win” and that “the Senator has obviously resorted to lying, cheating, and trying to steal.”

The back and forth got nasty before the moderator forced the candidates to move along to the next question, on abortion, which also got intense. The abortion issue was where Demings’ extremism truly came out, not only as Rubio framed his opponent’s position while defending his own, but when it came to Demings’ responses.

Rubio reminded he’s “100 percent pro-life” and informed that every pro-life bill he’s sponsored or voted for has exceptions “because that’s what can pass and that’s what the majority of the American people support.” As Rubio made clear during the lengthy back and forth on this issue, his priority and interest is in “saving human lives” and getting through what bills can pass and what Americans support, which are those with exceptions.

The abortion ban being referenced during the debate is Sen. Lindsey Graham’s (R-SC) ban at 15-weeks, with exceptions, which Rubio has co-sponsored. Rubio pointed out the bill is still more lenient than most European countries.

The senator also highlighted Demings’ record. “The extremist on abortion in this campaign,” he said, “is Congresswoman Demings.” Rubio pointed out how “she supports no restrictions, no limitations of any kind” and how “she is against a four month ban, voted against a five month ban” and “supports taxpayer-funded abortion on demand for any reason at any time up until the moment of birth. That’s what she supports. That’s the extreme position here.”

Rubio also called out the mainstream media’s failure to highlight, charging “nobody ever asks them about that.”

"The extremist on abortion in this campaign is Congresswoman Demings," says Senator @marcorubio.

"She supports taxpayer-funded abortion-on-demand for any reason at any time up until the moment of birth." #FLSenDebate pic.twitter.com/eMsu3fG1DT

Senator @marcorubio blasts Val Demings for supporting a federal takeover of elections: "You have to ask for ID to get into her neighborhood where she lives and you have every right to have that. But you can't ask for [ID] when they vote?" pic.twitter.com/t1si5rOiVI

Senator @marcorubio: "It's never been easier to vote."

"In Georgia — which they claim to be the place that was suppressing all the votes — you had record African American voter turnout." pic.twitter.com/xajpKDyeSX

"What makes no sense is that we're gonna actually pass laws that only law-abiding people will follow and criminals will continue to violate," says Senator @marcorubio.

"At the end of the day, Americans have a Second Amendment right to protect themselves." pic.twitter.com/xuse2ZNNjc

Senator @marcorubio: "The only one who has insulted the people working the border are Joe Biden and Democrats who accused them of whipping Haitian migrants and that turned out not to be true." pic.twitter.com/njZnTMuniR