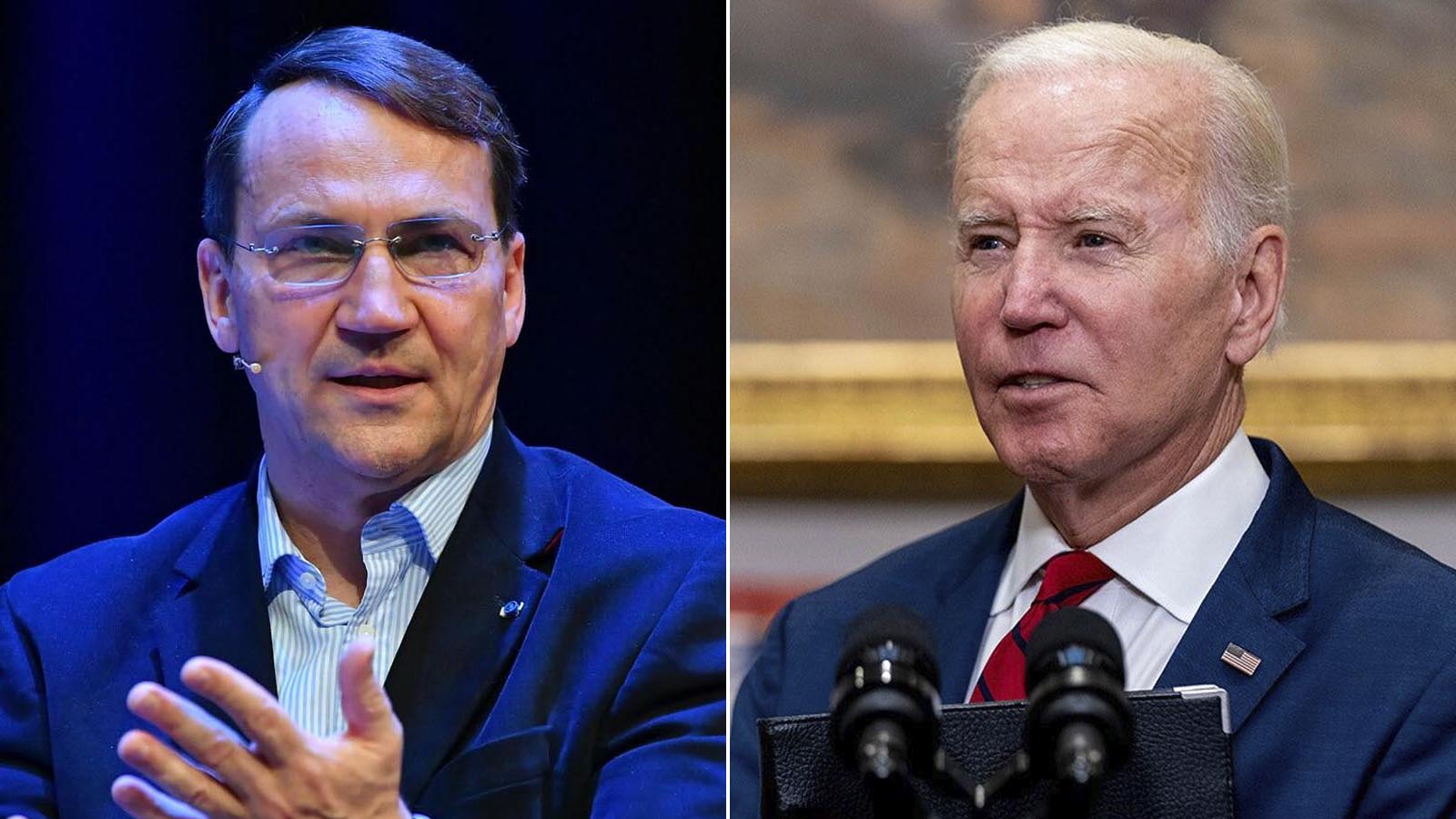 A former Polish Defense Minister, Radek Sikorski, has attributed to the United States the sabotage of two pipelines, Nord Stream 1 and 2, which carry natural gas from Russia to Germany. 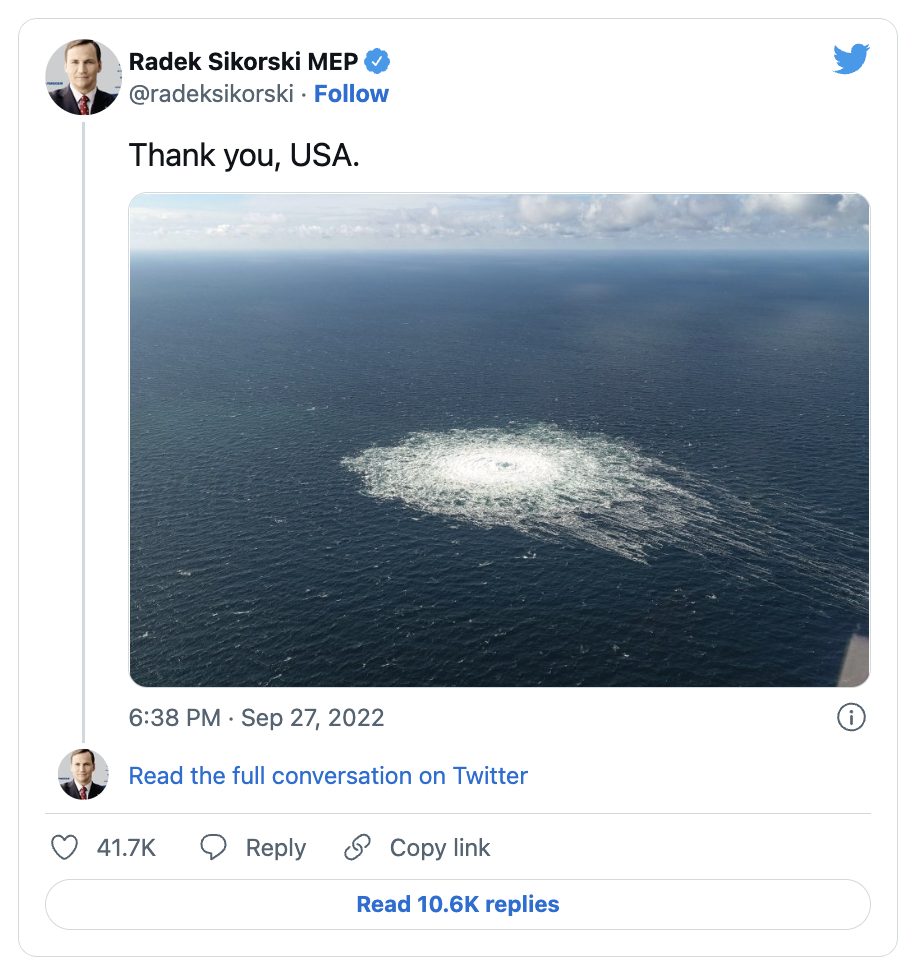 Poland’s Secretary of State, Stanisław Żaryn, denounced Sikorki’s claim on Twitter as “Russian #propaganda,” calling it “a smear campaign against Poland, the US and Ukraine, accusing the West of aggression against #NS1 and #NS2. Authenticating the Russian lies at this particular moment jeopardizes the security of Poland. What an act of gross irresponsibility!”

Nord Stream 1 and 2 lie on the bed of the Baltic Sea and bring gas from Russia to Germany. Nord Stream 2 was finished last year but Germany never opened it because Russia invaded Ukraine on February 24.

Russian #propaganda instantly launched a smear campaign against Poland, the US and Ukraine, accusing the West of aggression against #NS1 and #NS2.

Authenticating the Russian lies at this particular moment jeopardizes the security of Poland.
What an act of gross irresponsibility! pic.twitter.com/S9YJKRCv9B

But President Joe Biden promised on February 7 to prevent Nord Stream 2 from becoming operational if Russia invaded Ukraine. “If Russia invades,” said Biden, “then there will be no longer a Nord Stream 2. We will bring an end to it.”

Reporter: “But how will you do that, exactly, since…the project is in Germany’s control?”

Biden: “I promise you, we will be able to do that.”

Pres. Biden: "If Russia invades…then there will be no longer a Nord Stream 2. We will bring an end to it."

Reporter: "But how will you do that, exactly, since…the project is in Germany's control?"

Biden: "I promise you, we will be able to do that." https://t.co/uruQ4F4zM9 pic.twitter.com/4ksDaaU0YC

And Sikorski is no Putin apologist. In a May debate with Univeristy of Chicago political scientist, John Mearsheimer, Sikorski accused Russia of being in violation of the 1994 Budapest Memorandum, under which Ukraine gave up nuclear weapons. Following the debate, the Chairman of the Russian State, Duma Vyacheslav Volodin, said “Sikorski is causing a nuclear conflict in the center of Europe. He does not think about the future of Ukraine or that of Poland. If his suggestions are fulfilled, these countries will cease to exist, as will Europe.” Sikorski is also married to Anne Applebaum, a journalist known for her hawkish views toward Russia.

The exchange comes at the same moment that Germany magazine Der Spiegel has reported that the CIA warned Germany weeks ago of a coming attack on natural gas pipelines, Nord Stream 1 and 2, which transport natural gas Russia to Germany. Der Spiegel notes that Russia could have pulled off such the attack on the pipelines, but “It is difficult to see whether Russia or Ukraine could have an interest in such an incident.” Indeed, Russia could have restricted natural gas flows like it did earlier this month when it blamed an oil leak as the excuse, without blowing up the pipelines.

And Russia has made no secret of its desire to continue supply Europe with natural gas. On September 16, Russian President Vladimir Putin denied Russia caused Europe’s energy crisis and said that if Europe wanted more natural gas it should lift the sanctions in the way of opening Nord Stream 2. “The bottom line is,” said Putin, “if you have an urge, if it’s so hard for you, just lift the sanctions on Nord Stream 2, which is 55 billion cubic metres of gas per year, just push the button and everything will get going.”

The sabotage of Nord Stream 1 and 2 came the day before Poland and Norway opened a new, 850-kilometer natural gas pipeline, Baltic Pipe, through Denmark. European leaders praised the pipeline as a much-needed alternative to Nord Stream 1 and 2. Norway Energy Minister Terje Aasland called Baltic Pipe “a milestone on the important path towards European independence”.

Baltic Pipe connects Poland to Denmark mainland and then to Norway and allows Poland to consume Norway’s natural gas, as well as to allow Sweden and Denmark to buy natural gas from Poland. “The push to escape reliance on Russian energy was given extra urgency on Tuesday,” noted a journalist, “after mysterious leaks were discovered on two Kremlin-owned pipelines to Germany.” It’s now clear that the “leaks” were caused by sabotage. 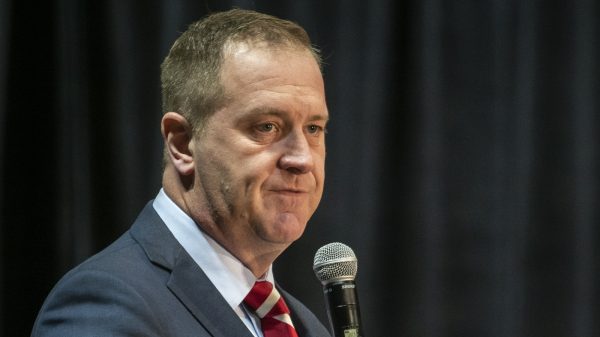