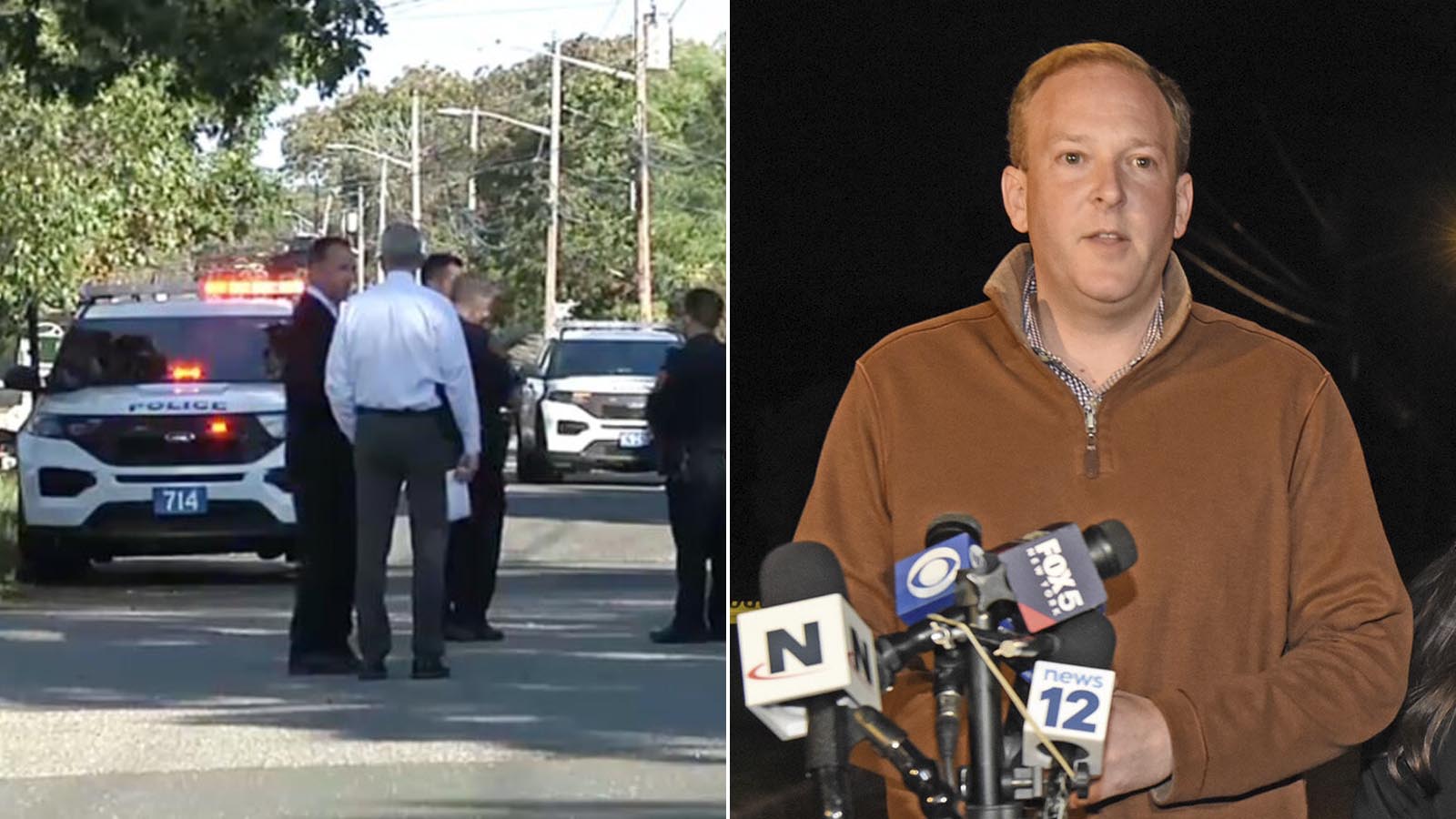 Suffolk County police tell Fox News the shooting happened around 2:20 p.m. on Sunday in Shirley on Long Island. In a statement, Zeldin said his two 16-year-old daughters were inside alone doing homework when shots were fired just outside his Long Island home.

The police department said the incident is “unrelated to the residents of the house.”

Zeldin had just departed the Bronx Columbus Day Parade in Morris Park when the shooting happened, and said his daughters locked themselves in a bathroom and called 911.

“My 16-year-old daughters, Mikayla and Arianna, were at our house doing homework, while my wife, Diana, and I were in the car, having just departed the Bronx Columbus Day Parade in Morris Park,” Zeldin said. “After my daughters heard the gunshots and the screaming, they ran upstairs, locked themselves in the bathroom and immediately called 911. They acted very swiftly and smartly every step of the way and Diana and I are extremely proud of them.”

In a tweet, Zeldin said that one of the bullets fired landed just 30 feet from his two daughters.

The two people who were injured in the shooting were “laying down under my front porch and the bushes in front of our porch,” Zeldin said.

“My understanding is that they have been transported to area hospitals. I do not know their identities,” Zeldin said. “Law enforcement is currently at our house. My entire family is at home working with the investigators and providing the security footage from our home cameras.”

In a statement, the Suffolk County Police Department said that two teenagers were injured in a drive-by shooting on Zeldin’s street.

Three teenagers were walking down Zeldin’s street when someone in a dark-colored SUV fired multiple gunshots through the car’s window at 2:19 p.m., injuring two 17-year-old males. The two males attempted to hide in the yard of what’s presumed to be Zeldin’s residence after being shot.

According to the police department, the third teenager fled the scene.

The two injured 17-year-old males were taken to a local hospital for non-life threatening injuries.

When Zeldin arrived at his Long Island home, he discovered that his porch was part of the crime scene, adding that there was blood found around the porch.

Zeldin said in a Sunday night press conference on his street that the state’s crime crisis is hitting close to home.

“It hits really close to home when it shows up on your front doorstep,” Zeldin said. “I’m just so grateful that my daughter’s responded as quickly, as swiftly as they did.”

Zeldin also noted that just 24 hours “to the minute” that the shooting took place, he was doing an interview on the front porch with a reporter “talking about rising crime in New York.”

“We cannot surrender any street anywhere in the state of New York to criminals. I want to see our law enforcement in charge of all of New York’s streets,” Zeldin said of recent crimes in the state. “I don’t care if you’re in a big city, a small city, a big town, a small town. I want law-abiding New Yorkers to be able to go ride a subway car and not have to hug a pole or grab a guardrail, being afraid of being pushed in front of an oncoming subway car. Or having to take off your yarmulke because you’re Jewish and others who, you know, others are being attacked because they’re Jewish.”

“I just don’t want to ever stand in front of a crime scene tape outside my own home or outside of anyone else’s,” Zeldin said, thanking law enforcement officials.

Zeldin said that based on security footage that he reviewed, there were three people in his front yard. He added that the third person appeared to be on a cellphone and was “very active and moving around.”

The New York congressman also said that he doesn’t know the two men who were shot.

One reporter asked Zeldin if it was appropriate to “talk politics” just hours after the shooting. Zeldin responded that he’s “surprised that you or someone else might even look at it that way.”

“I mean, at what point are we supposed to talk about the crime on our own streets? I’m standing in front of crime scene tape in front of my own house. You can’t get me more outraged than right now,” Zeldin said. “But for us, we’re more pissed off today than we were when we woke up this morning.”