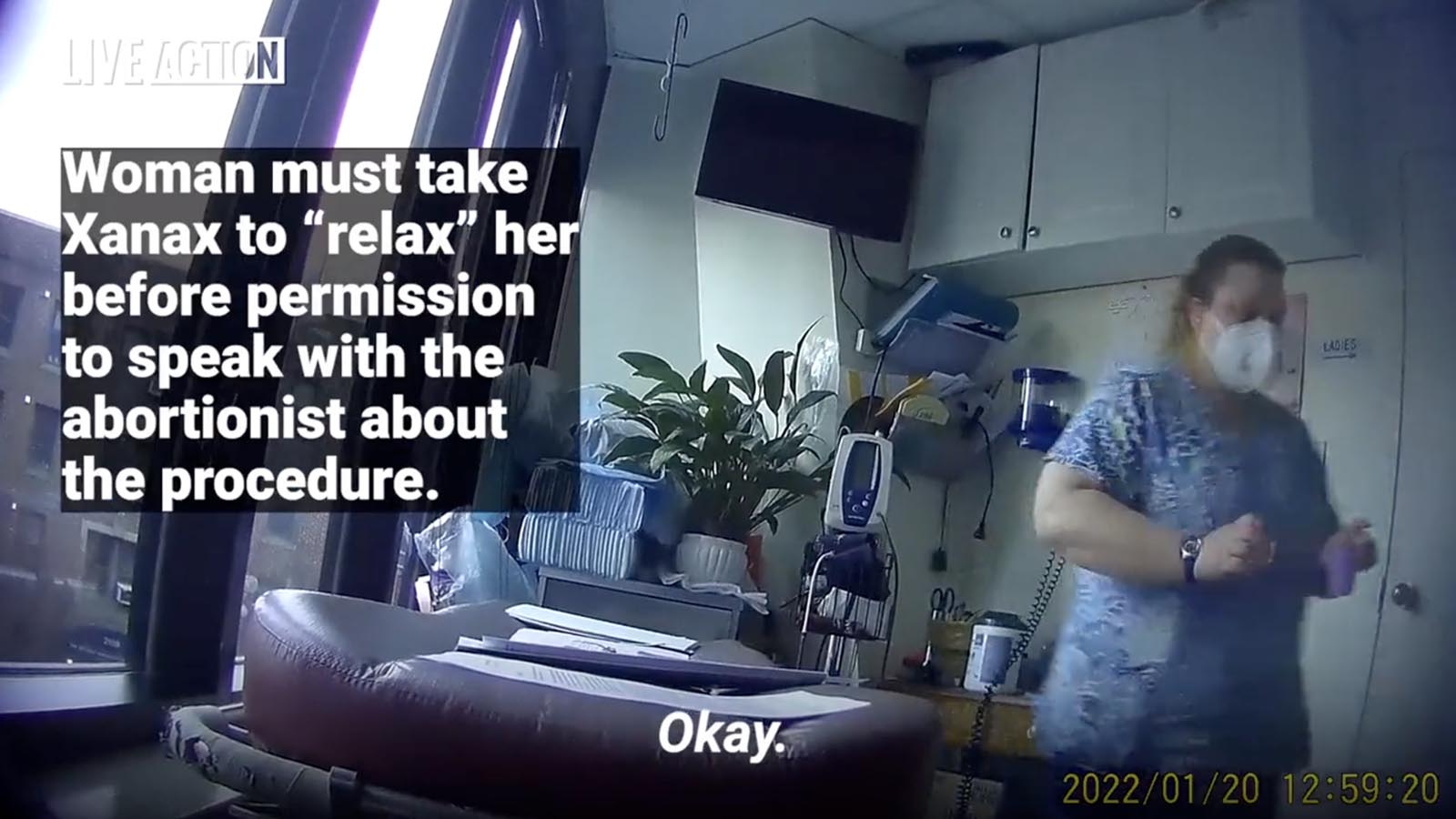 As the pro-life movement celebrates the U.S. Supreme Court officially overturning Roe v. Wade with its Dobbs v. Jackson decision, those in the movement have also been contending with calling out abortion abuse where it is ongoing.

Just before the Court handed down the Dobbs decision, Live Action released undercover footage showing the abuses committed by Dr. Cesare Santangelo, who performs abortions at the Washington Surgi-Clinic.

His website advertises performing abortions up until 31 weeks and 6 days, which is into the third trimester.

The undercover footage shows that the Washington Surgi-Clinic abortion facility is forcing mothers to take mind-altering medications before meeting with the abortionist and giving final consent.

This is a violation of basic medical ethics.

The undercover footage, filmed in January of this year with a pregnant investigative activist presenting herself as a patient, reveals that patients have to take Xanax and have their pants off already when speaking to the abortionist.

A nurse also reveals to that they perform “a lot” of abortions at or past 28-weeks–the start of the third trimester–that are not for medical emergencies.

Given how late into pregnancy the procedure would be performed, the nurse also informs the patient there’s a possibility that she could go into premature labor before then in her hotel room. The patient merely told to call the facility and they’ll tell her what to do next. After signing forms confirming they’ve had such a discussion, she’s told the doctor “could come and help you take care of it.”

As is explained by Live Action president and founder Lila Rose, this type of procedure is more likely to result in live births.

The new footage also provides first-hand testimony that the Washington Surgi-Clinic may kill late-term babies without using a feticide drug, increasing the chance that the babies would be born alive and then brutally and illegally killed.#JusticeForTheFive

It’s then after speaking with the nurse and signing forms that the patient is given an antibiotic, pain mediation, and Xanax before she can speak to the abortionist.

When the patient asks if she can take them after speaking to the abortionist, she is told “uh, well, unfortunately, they need to be in your system in order for the doctor to do the procedure.” The patient is also told “it shouldn’t” when asking if the Xanax will affect her “clarity of thinking.” The drug can affect memory, though, and, as the nurse acknowledges, make one sleepy. The nurse doubles down on how the patient has to take the Xanax first, despite the patient making clear she is not comfortable doing so.

It’s at that point that the patient leaves.

As a piece from Live Action News and the Twitter thread from Rose explained, the woman in the video has filed an ethics complaint. The nurse also indicates that the patient is directed to take two pills, which the piece points to being relevant:

The woman involved in the filming of the undercover video, who was 28 weeks pregnant at the time, has filed a complaint with the D.C. medical board regarding this breach of ethics surrounding informed consent. Experts who have filed affidavits supporting the complaint say that making patients consume mind-altering medication prior to meeting with the abortionist is a grave violation of basic medical ethics.

The complaint notes that “acute administration of Xanax risks ‘cognitive impairment,’ which includes ‘poor attention and anterograde amnesia’ as manifested by ‘difficulties learning new material.’” It also states, “administering Xanax prior to a full medical consultation appears to be a negligent, if not reckless, practice of medicine. It also appears highly unlikely that introducing benzodiazepines before said consultation is a prevailing standard of acceptable medical practice” and asks that the D.C. Medical Board “begin an investigation into Dr. Santangelo and Surgi-Clinic and whether the practice of requiring use of benzodiazepines prior to medical consultation warrants the imposition of sanctions or disciplinary action here.”

Xanax pills come in different colors based on dosage, and the nurse tells the patient “the two blue ones are the Xanax.” Blue Xanax are typically 1 mg each, except for the blue Xanax bars, which are 2 mg each. The recommended starting dosage of Xanax is 0.25 mg to 0.5 mg administered three times daily. According to Drugs.com, the dosage may be increased every three to four days in increments of no more than 1 mg per day. Some individuals have reported memory loss or blacking out after taking Xanax, and higher doses will have a stronger effect.

Experts have weighed in and expressed concerns, and Rose is calling on an investigation of Dr. Santangelo.

Dr. Francis continued  "There is no reason a medication like this should be routinely given to a patient prior to her meeting with a physician and going through the consent process.”#JusticeForTheFive

The government of DC, @MayorBowser, the Medical Board, & @DCPoliceDept must investigate Santangelo and his facility.

They are not only killing children through abortion, but they may be committing illegal infanticide, and violating well-established norms of medical ethics

That women are drugged with Xanax particularly earned shocked reactions, especially as this may affect a woman’s cognitive ability.

Appalling. The so-called "pro-choice" lobby says these decisions are for a woman to make with her doctor

But in reality, you can only talk to the doctor with Xanax in your system and your pants down on the table

Is this their idea of choice?? https://t.co/elXcxqjv81

Live Action has repeatedly called for an investigation into Dr. Santangelo. While there is no gestational limit for abortions in the District of Columbia, there are concerns Dr. Santangelo has performed abortions using the illegal partial-birth abortion procedure, as well as that babies are born alive from their abortions before ultimately dying.

Earlier this year, pro-life activists with Progressive Anti-Abortion Uprising (PAAU), obtained the remains of fully formed babies that had been aborted at the Washington Surgi-Clinic. The remains were going to be disposed of as medical waste.

While pro-abortion officials in D.C. have largely been uncooperative, that has not deterred on PAAU for calling on D.C. and federal officials from calling for “justice for the five,” in reference to images of these aborted children that have been released. Last month, they were joined by Sen. Ted Cruz (R-TX) in calling on Attorney General Merrick Garland to investigate. Other members of Congress have also called for investigations.

Further, shortly after the press conference with Sen. Cruz, Lila Rose tweeted that the DC medical examiner is allowing a private pathologist to examine the babies.

This is not merely a recent phenomenon, though. Dr. Santangelo was included in Live Action’s “Inhuman” undercover investigation released in 2013, due to evidence he left babies to die who were born alive from abortion.