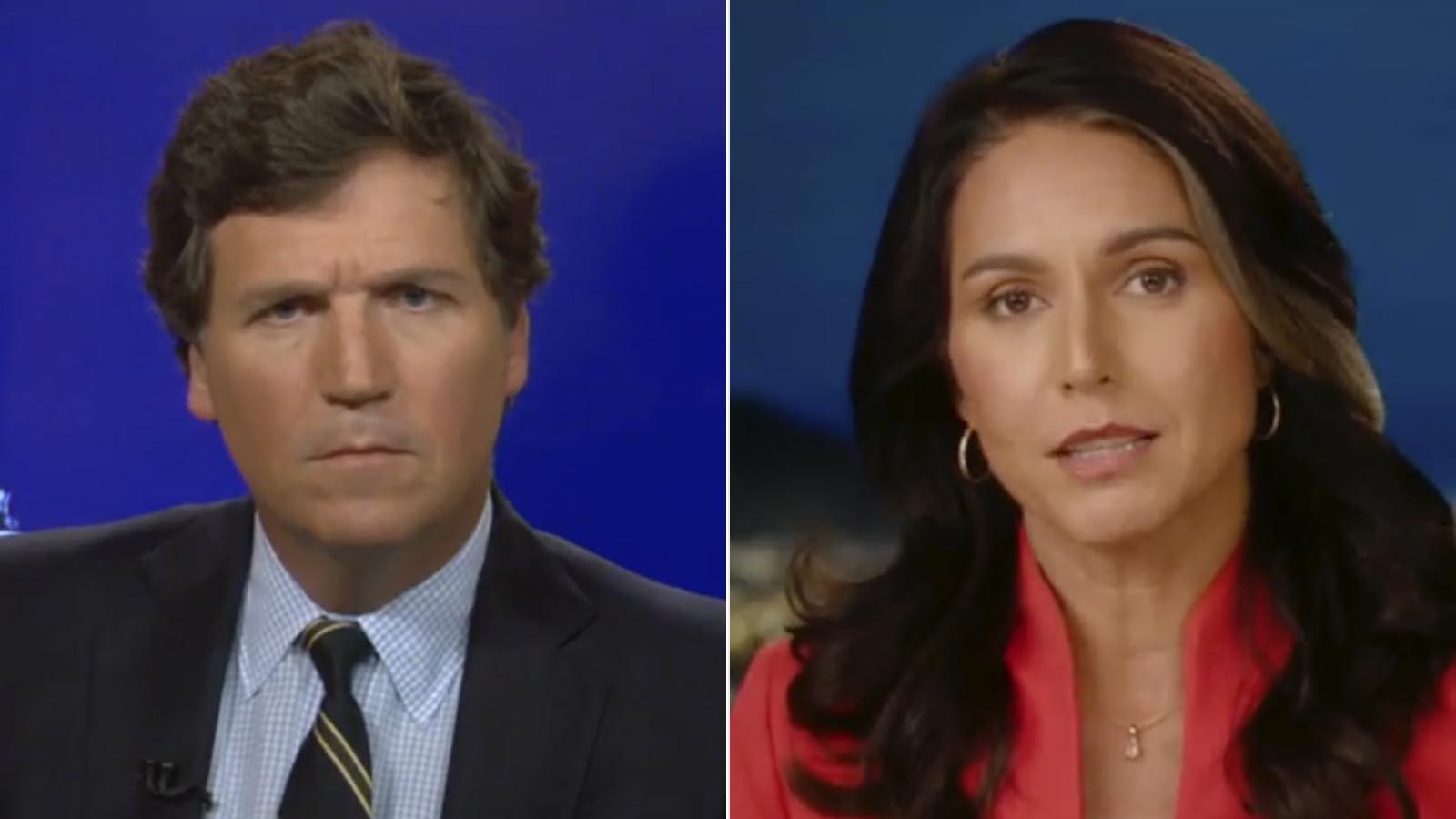 Former Hawaii congresswoman Tulsi Gabbard said her love of freedom was behind her decision to leave the Democratic Party, telling Fox News’ Tucker Carlson she could no longer be a member of a party that seeks to “destroy” and silence its opponents and undermine freedom.

“I’ve always been an independent-minded person,” Gabbard told “Tucker Carlson Tonight.” A Democrat, yes, but an independent Democrat. And my loyalties are very clear: I love our country. And I took an oath both as a service member, as a soldier, as well as a member of Congress, to support and defend the Constitution. And that’s an oath that I take extremely seriously.”

“And so when you look at this party, the today’s Democratic Party, it’s controlled by fanatical ideologues who hate freedom. They despise the Constitution. They actively find ways to undermine our God given rights enshrined in the Constitution, like freedom of speech, if you say something and I say something that they don’t like.”

In a nearly 30-minute video posted to her YouTube account Tuesday, Gabbard, a former presidential candidate, announced she was leaving the Democratic Party. The U.S. Army National Guard officer accused the Democratic Party of “racializing” every issue while stoking anti-White racism and derogatory sentiment.

Gabbard had long been previously attacked by leading Democrats like Hillary Clinton, who accused her of being a Russian apparatchik, and said she decided it was time to break with a group now controlled “by an elitist cabal of warmongers driven by cowardly wokeness.”

This wokeness has helped create a world where Americans are afraid to speak their mind and fear real repercussions for having unpopular beliefs, Gabbard said.

“[T]he whole environment of fear that those in power, these elitists in power, have fomented to where people are afraid to speak the truth,” she told “Tucker Carlson Tonight.” “They’re afraid to exercise their right to free speech because, hey, you might lose your job, you might be canceled, you might be trashed. And God forbid, in Washington, you might not be invited to the cool kids parties.”

“[W]hat it comes down to is rather than taking a stand for peace, for prosperity, security and freedom of the American people, we have too many people in Washington who are warmongers subservient to the military industrial complex and continuing to put their own selfish interests or the interests of their donors first with no mind for the costs and consequence that their decisions have on the American people,” she added.

Gabbard said contemporary liberals are not the same as their 20th century brethren, in that they do not believe in “live and let live” but instead want to destroy anyone who disagrees with them through silencing, slander, intimidation or worse.

“They are against freedom of religion. They are hostile towards people of faith. People who have their own spiritual practice, especially Christians, finding ways to be vindictive, to discriminate, to punish people who happen to exercise that freedom of religion,” she argued. “The list goes on and on, but the foundation of freedom is really what was at the heart of my making this decision that I cannot be a member of a party that is against freedom and actively trying to undermine it.”

Gabbard, whose seat is now held by Rep. Kaiali’i Kahele of Kona, invited other Democrats to join her in a more independent and unifying political frame earlier Tuesday. Gabbard told Carlson only one Democratic lawmaker reached out to her following her announcement, offering three thumbs-up emojis.

Former House Speaker Newt Gingrich praised Gabbard for ditching the Democrats in a statement on Fox News. He argued that she is one of many Americans who traditionally have voted blue but now find the Democratic Party unrecognizable.

The American Samoa native, however, was blasted by her now-former ideological colleagues, including liberal attorney Katie Phang, who mocked “wait, you were a Democrat? Sure could have fooled me.”

Anti-Trump commentator and former Conservative member of British Parliament Louise Mensch proffered a mock salute in Russian to Gabbard, writing “Dosvedanya, Tulsi, nobody will miss you.”

Many conservatives, however, welcomed the news, including Meghan McCain – daughter of the late Sen. John McCain, R-Ariz., – writing on Twitter, “congratulations… there are so few free thinkers and independents left in this world and you are one of them. We are in your corner.”

“Onward and upward,” she added.

Gabbard has often highlighted her politically independent nature, finding common ground with Republicans at times, while also crediting socialist Vermont Sen. Bernard Sanders as someone who has always shown her “the greatest respect and encouragement.”

While Sanders was seeking the Democratic nomination for president, Gabbard offered such praise following a meeting in which she informed him she too would join the dais.

Gabbard also recently filled in as a guest host for “Tucker Carlson Tonight.”