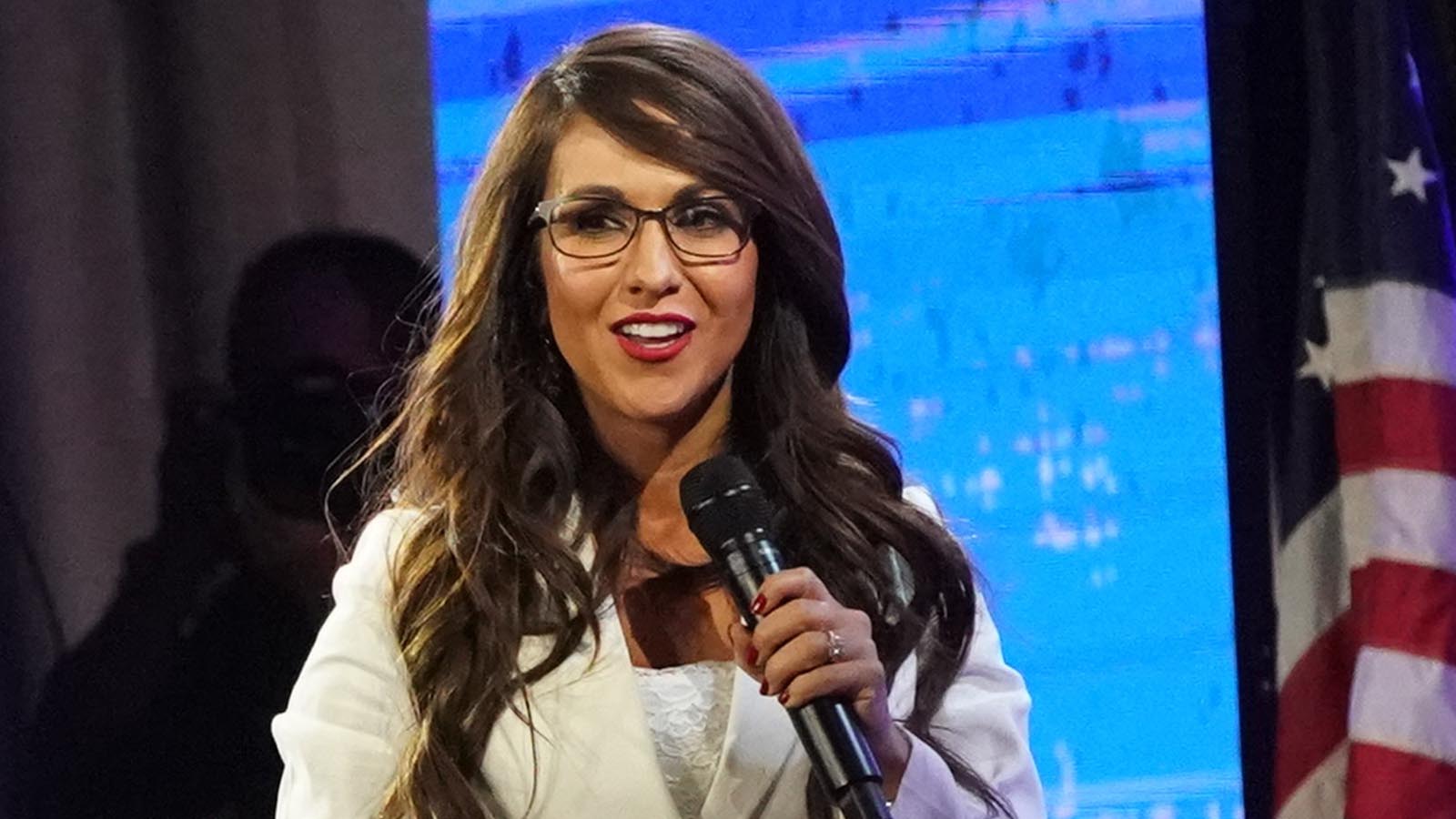 By 9:57 p.m. ET on Tuesday, Boebert had corralled more than 63 percent of the vote with 60 percent of precincts reporting.

The popular incumbent now hopes to defeat the winner of the Democratic primary and two others on November 8 in her bid for a second term representing Colorado’s sprawling 3rd Congressional District.

One of the candidates ready to duel it out with Boebert is homebuilder and substitute teacher Adam Frisch of Aspen. He spent eight years on the ski-resort town’s city council, focusing on water rights, affordable housing, and green energy.

Frisch was 4 percent ahead of the closest challenger in the Democratic primary as of 9:59 p.m. ET, but the race was still too close too call.

In Colorado, the candidate with the most votes wins. It’s a more straightforward outcome than in some states, where runoffs are triggered when no candidate pulls in at least 50 percent of the vote.

Moving forward to the fall general election, Boebert and the Democratic primary winner will face Kristin Skowronski, an Independent.

And the district’s 722,000 voters also will have the option of penning the name of Republican Marina Zimmerman, a write-in candidate, on their ballots.

Nonpartisan election handicappers, including Sabato’s Crystal Ball and Inside Elections, predict Boebert as the likely winner, as of now.

She’s also caught attention for her flamboyant opposition to nearly all policies emanating from the Democrat-controlled Congress and President Joe Biden.

Her “pro-freedom, pro-guns, and pro-Constitution” goals, outlined in a Contract with Colorado on her campaign website, apparently resonated with donors. Contributions of $4.96 million have flowed in to support her effort to hold on to her job.

Opponents complain about her provocative style.

She sells gun-themed merchandise with her image through her campaign website, and she posed in a dress emblazoned with “Let’s Go Brandon” across her posterior while standing with Trump.

The former president officially endorsed her for reelection in December.

Her flashy behavior is one reason Frisch decided to run. He has poked at Boebert throughout the campaign, calling her “antics” an “embarrassment,” and criticizing her for not seeking a more bipartisan approach.

Frisch took his anti-Boebert message on the road, driving about 7,500 miles to towns throughout rural Colorado.

Based on conversations he’s had while winding over the mountains and through the valleys, he believes “there’s a lot of Republicans that are frustrated with her, and those Republicans feel that the party’s left them.”

Though he’s a registered Democrat, he often straddles political lines, he says, avoiding extremes in either direction. He votes Democrat when it could affect who ends up on the Supreme Court.

“But I always tell people, if there was a Get Stuff Done Party, I’d be a part of it,” Frisch told The Epoch Times.

He describes himself as “a pragmatic, moderate Democrat.” But he takes issue with the party for not “taking care of rural America.” Until last year, he was registered as unaffiliated.

He feels abortions should be “safe, legal and rare,” a throwback to Clinton-era Democrat talking points on the subject, and feels immigrants should be welcomed because they’re needed additions to the workforce.

Financial reports filed before the primary show Frisch had raised about $1.05 million in donations, more than any other Boebert challenger. At a debate of all five candidates, he said he was the only one who could beat the incumbent.

The district needs a congressional representative who will focus on securing funding for better access to education and health care in rural areas, Frisch said. He wants to tackle inflation and work on protecting the state’s water rights, especially now during a historic drought.

He also wants “to stop what I call the anger-tainment industry, and I think Lauren Boebert and Marjorie Taylor Greene are kind of the queens or kings, if you will, the leaders of that,” he said.

“Anger-tainment is yelling and screaming across as many cable news networks as you can get on, ginning up outrage and raising money from that outrage,” rather than being “focused on the issues that are affecting rural America or your constituents.

“There’s a lot of big issues that are things a lot of voters want to see tackled,” he said. “And I think a lot of the voters want whoever gets in office to work with people from the other party to get things done.”

To spread his message, he recently repurposed his family’s camper as the “Beat Boebert Buggy,” and towed it to dozens of communities on an 1,800-mile loop to reach voters in the last days before the primary.

“My workhorse mentality is why I’m driving around the whole district,” he said.

If elected, he’ll try to become part of what’s known as the Problem Solvers Caucus, made up of 29 Democrats and 29 Republicans.

Frisch was endorsed by the Durango Herald, the Southern Colorado Labor Council (SCLC), and the American Federation of Government Employees (AFGE).

The candidates now are fighting to claim a district that covers 49,000 square miles, about half of the state’s geography. It spans the Pacific side of the continental divide in the Rocky Mountains, known to Coloradans as the “Western Slope.” It also pushes into part of the southeastern plains, part of what locals call the “Front Range.”

With less than five months before Election Day, candidates likely will focus on reaching Coloradans registered as being unaffiliated with any party. They make up 46 percent of the state’s 3.73 million voters. And that means they wield more power than any other group.

To vote, Coloradans simply can mark the ballot mailed to them, and send it back, a practice that dramatically shrinks the number of voters who choose to vote in person, but raises turnout.

Despite that, “it’s important to remember that election night results are never final results in Colorado,” Secretary of State Jena Griswold wrote in a pre-Election Day prepared statement.

“After election day, military, and overseas voters return their ballots, signature discrepancies can be fixed, and bipartisan audits are conducted to determine statistical confidence in the results.

“While county clerks begin to process ballots prior to election day, which allows for a high percentage of results to be reported on election night, there is quite a bit of activity that occurs after election day.”

Frisch was one of three Democrats vying to move on to the fall election.

Sol Sandoval, the daughter of naturalized Mexican immigrants, was in second as of 10:05 p.m. ET, less than 4 percent behind Frisch.

The Pueblo, Colorado resident also finished second in fund-raising. She brought in almost $899,000 in donations and spent all but $30,000 by the June 8 deadline to file required financial reports.

On Wednesday, Sandoval paused campaign efforts in Pueblo to record an impromptu video message about the overturning of Roe v. Wade.

“I am extremely saddened to learn that my daughter, your daughters, [and] I will have less rights than our grandmothers did,” she said in the video posted to her campaign website. “It’s a very, very sad day in history, because we’re going backwards, instead of forward. I would have voted in favor of putting Roe into federal law.

“Women deserve privacy,” she continued. “We deserve the right to make decisions over health and decisions that impact our person. So this is something that is devastating. This is why it’s so important for us to elect individuals like me, who are openly and unapologetically in support of women’s reproduction rights.”

She concluded, “My heart is breaking with you guys.”

During a June virtual debate, the single mother described herself as an advocate for “health equity” and a former social worker. She promised to work on “protecting public lands, holding polluters accountable, and investing in a just transition to clean, renewable energy” if “we hope to stop climate change before it’s too late.”

She’s a lifelong Democrat, running because people should be able to “retire with dignity, because we shouldn’t have to work until our last breath,” she said in the debate.

“My rights and our daughters’ rights are on the line,” she said in the debate. “We must elect someone who is going to fight … for all people. I’m running because no one is coming to save us. We have to save ourselves.”