The flurry of rulings from the Supreme Court has everyone’s head spinning. The most significant among them, even if it doesn’t capture all the headlines, is West Virginia vs EPA. The majority opinion is impressive but the part I found truly wonderful is the concurring opinion by Neil Gorsuch. This is where we see things headed, toward a major and much-welcome curbing of the power of the administrative state.

Just to review what this thing is, it is the unelected bureaucracy that rules the country without oversight from voters or legislatures. For well over 100 years, most courts have given it a pass, just assuming that the “experts” in the bureaucracies are handling things just fine, faithfully interpreting legislation, and merely creating rules for easy compliance.

Generations have gone by as this 4th branch of government has grown in size, scope, and strength. For the most part, its baneful impositions have been felt by one business or one industry at a time. You have heard the stories. The car dealer complains of how the Department of Labor is making him crazy. The machine-parts manufacturer is going bonkers about letters from the Occupational Safety and Health Administration. The energy company can never satisfy the Environmental Protection Agency.

They are stories and we find them unfortunate but we’ve generally avoided thinking of these as systematic, all pervasive, and truly dangerous to the idea of freedom itself. However, there are some 432 of these agencies. The authors of the Declaration of Independence noted their existence back in the day when they accused the English king of having “erected a Multitude of new Offices, and sent hither Swarms of Officers to harass our People, and eat out their Substance.” They fought a revolution to end the tyranny but now we have a home-grown form, starting in 1883 with the Pendleton Act and continuing throughout the 20th century as each new administration creates its own bureaucracy.

The thing has taken on a power of its own. Strangely, the topic hardly comes up at all during elections, and this is for a reason. Politicians running for office like to advertise their power to make change. They might even believe it. In reality, elected officials have very little influence over the conduct of public life relative to the administrative state. As Trump found it, not even the president is a match for the deep state.

Here is what has happened since March 2020: the beast showed its face. Seemingly out of nowhere, these strange agencies and people for whom we never voted were ruling our lives. They restricted travel, forced us to cover our faces, closed our churches and schools, and forbid our businesses from operating unless they were big enough to afford a powerful lobbying arm in Washington. The whole scene was appalling. It caused many people—including some earnest judges—to take notice.

Once you see the problem, you cannot unsee it.

Consider the problem with inflation alone: it is largely the responsibility of the Federal Reserve, which is among the most terrifying of the deep-state agencies. This thing was founded in 1913 with the promise that it would end “wildcat banking” and contain the expansion of money and credit so that we would have a more stable economic environment to encourage growth.

Even now, people believe that the Fed is going to somehow fix recessions and inflations, even though a deeper analysis reveals that the Fed itself is the cause of both. The Fed cannot be both the problem and the solution, surely. This is becoming as obvious as the fact that the CDC cannot make a textbook pathogen go away with power and potions.

Let’s take a quick look at the supposed 2 percent inflation target of the Federal Reserve. It might seem to you that they have long ago blown past this such that it is entirely cosmetic. But the Fed has a little trick up its sleeve. It says it doesn’t follow conventional inflation indexes like the Consumer or Producer Price Index. It is fancier than that. It follows instead the index of Personal Consumption Expenditures. And sure enough when we look at the PCE, we find that the Fed is pretty good at its job!

All that changed recently when the PCE itself blew up. Now the Fed has been revealed to be utterly incompetent, in a way that is not different from the CDC, NIH, DOL, DOE, DOT, HHS, DHS, FTC, SEC, and all the rest of these glorified 3-letter agencies employing nearly 3 million people who cannot be fired or controlled. The unique feature of our times is that the expert class in government has been unmasked as fakes at best and unrelenting menaces as worst.

Here is where the Fed’s preferred measure of inflation stands today: 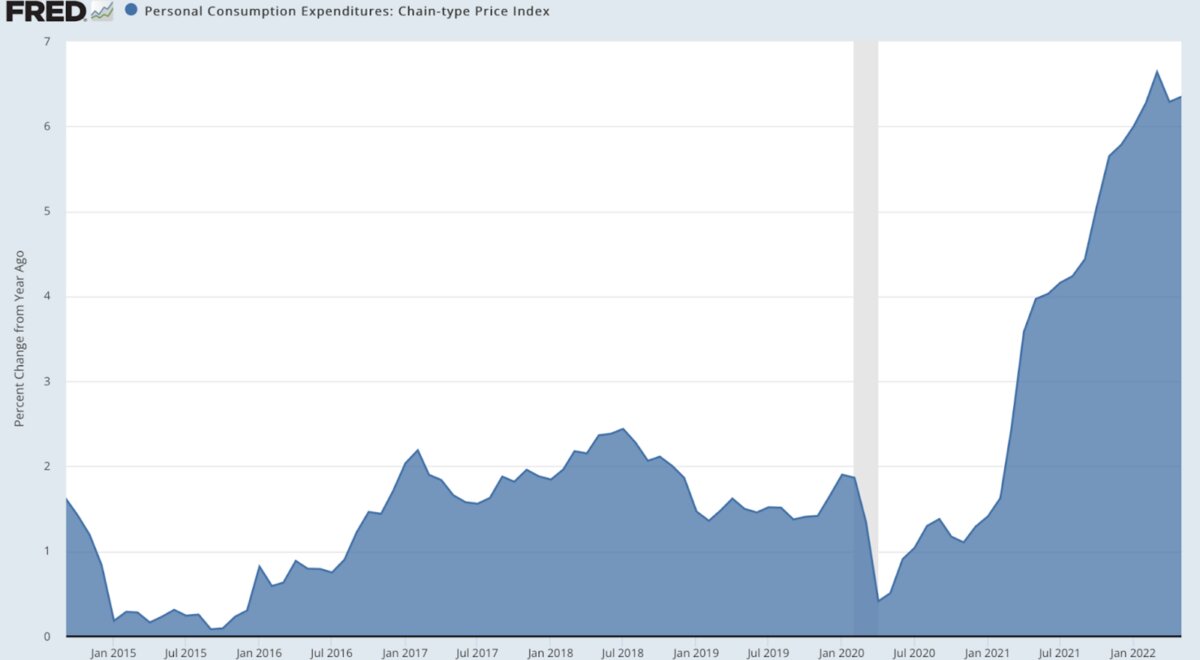 So much for competence at the Fed! And yet, how exactly is this institution supposed to be controlled? We don’t vote for them. The Fed board is appointed by the president with Senate approval but this control is mostly mythical. The fancy economists run circles around the political actors with big words and fancy finance, so what can they do but approve?

The political class too often acts like absentee owners of a far-off land: they have little choice but to trust the hired landlords to do a good job. That’s the administrative machinery that has become the real power, not only implementing the policies but making and enforcing the rules too.

With COVID, this whole scam was revealed to absolutely everyone—not just to small businesses but to every single individual and family in the United States. The whole bureaucracy announced to us what they have always believed but rarely said: your life is not your own. Your job is to comply. And so this raises the fascinating question of what precisely are we going for here and what kind of society and government do we want? Surely this should be up to the people!

The Supreme Court in its most recent decision was dealing with a technical aspect of how regulations applied to a coal plant, but the implications of the decision are much larger. The EPA was determining policy, even making it, riffing wildly on legislation with the presumption that courts will always and everywhere defer to the agency over industry and even over the words of the legislation. The court said no: it was the EPA that had been operating illegally all along.

This decision is so startling because it shows a Supreme Court doing what it is supposed to do, serving as a legal check on the power ambitions of government itself. That’s what the framers intended. We’ve just begun, however. The Court needs to attack the whole machinery of the deep state at its very root, going after “Chevron deference” (1984), the Public Health Services Act (1944), the Federal Reserve Act (1913), and stretching all the way back to the Pendleton Act (1883). A nation ruled by a faceless deep state is not a representative democracy and it is not consistent with the U.S. Constitution.

When you consider the implications of this one decision, they are awesome. It doesn’t just apply to the EPA and its elaborate plans for changing the global climate through command and control. It also applies to every other agency, including the CDC and even the Federal Reserve itself. They all should be accountable to the people through their elected representatives. If we cannot get back to that system, we will lose everything.