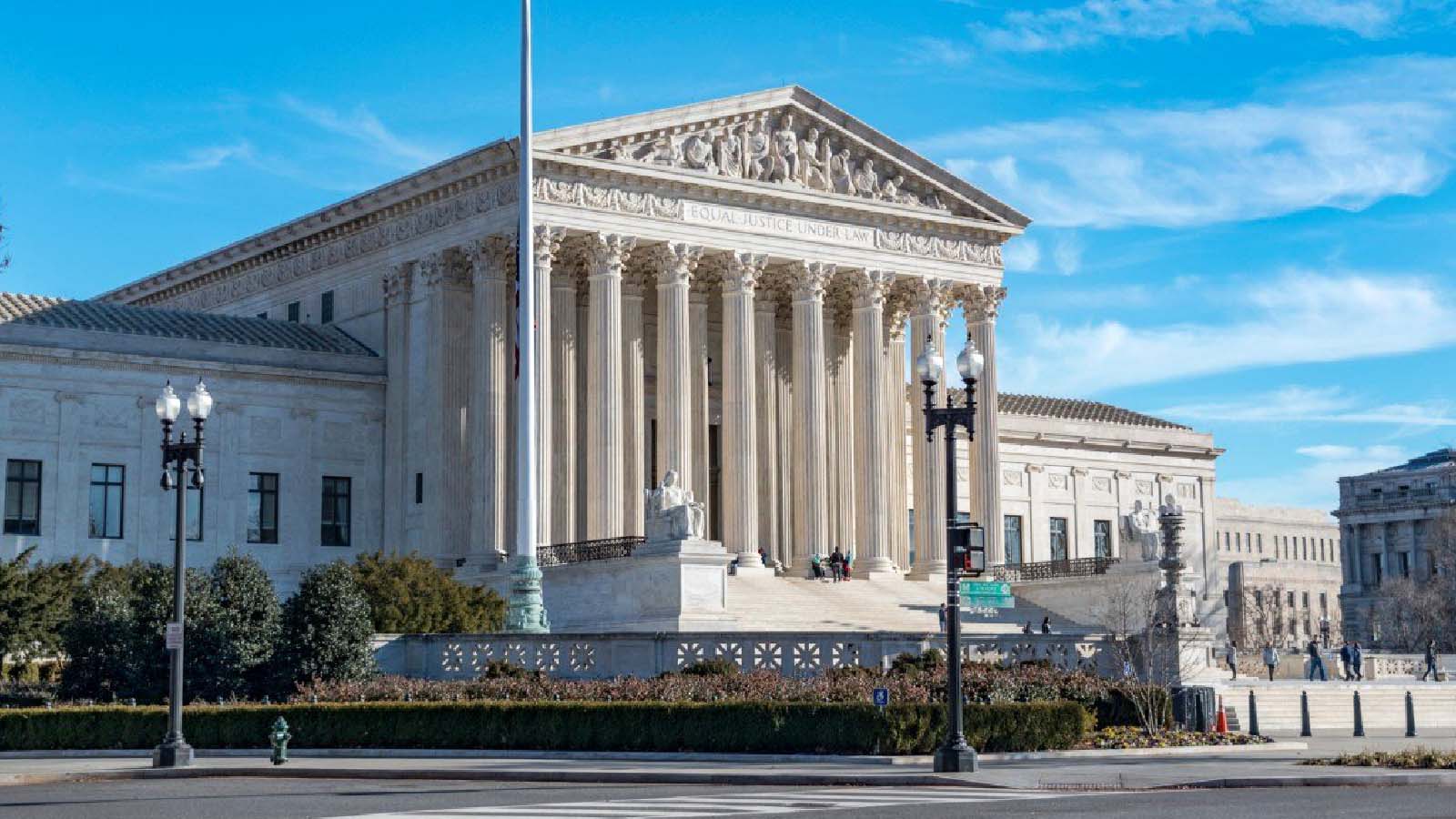 ​The Supreme Court has struck down New York’s century-old law restricting the carrying of concealed firearms, its first major Second Amendment decision in more than a decade and a ruling that could lead to more guns on the streets.

Writing for the 6-3 majority, Justice Clarence Thomas said Thursday that the law’s requirement of New Yorkers who want a permit to carry a handgun in public to show “proper cause” that the weapon is ​specifically needed for self-defense “violates the Fourteenth Amendment by preventing law-abiding citizens with ordinary self-defense needs from exercising their right to keep and bear arms in public.”

Though the decision concerns New York law, it is likely to affect a handful of other states with similar permitting regimes, including California, Hawaii, Maryland, Massachusetts, New Jersey and Rhode Island.

In a separate opinion concurring with Thomas, Justice Brett Kavanaugh and Chief Justice John Roberts wrote that Thursday’s ruling does not preclude state and local restrictions on gun ownership by felons and the mentally ill — or laws banning the carrying of firearms in “sensitive locations” like schools and government buildings.

“Properly interpreted, the Second Amendment allows a ‘variety’ of gun regulations,” wrote Roberts and Kavanaugh, who also noted that states can still make applicants for a firearm license “undergo fingerprinting, a background check, a mental health records check, and training in firearms handling and in laws regarding the use of force, among other possible requirements.”

Mayor Eric Adams emphasized at a news conference with NYPD Commissioner Keechant Sewell that “nothing changes today” as a result of the ruling, noting that the decision was remanded to the 2nd Circuit Court of Appeals to reconsider its earlier decision upholding the state law.

“If you have a premise permit, it does not automatically convert to a carry permit,” Sewell warned. “If you carry a gun illegally in New York City, you will be arrested. Nothing changes today, and that’s important for everyone to be aware of.”

The New York State Rifle and Pistol Association and two upstate men had challenged the Sullivan Act — on the books since 1913 — claiming it violated their Second Amendment rights.

Paul Clement, the lawyer representing the association, told the justices during oral arguments last November that his clients were seeking “nothing more than their fellow citizens in 43 other states already enjoy.”

“Carrying a firearm outside the home is a fundamental constitutional right. It is not some extraordinary action that requires an extraordinary demonstration of need,” Clement said at the time.

Thomas agreed, writing: “Nothing in the Second Amendment’s text draws a home/public distinction with respect to the right to keep and bear arms.”

The justice also wrote that “the Second Amendment guarantees an ‘individual right to possess and carry weapons in case of confrontation,’ and confrontation can
surely take place outside the home.”

City and state officials have expressed fear that striking down the law would lead to more people carrying weapons in public even as gun violence has surged amid the COVID-19 pandemic.

Gov. Kathy Hochul described the court’s decision Thursday as “not just reckless,” but “reprehensible” and “frightful in its scope.”

“The Supreme Court is setting us backwards in dealing with gun violence,” Hochul told reporters during a Manhattan news conference.

In a separate statement, Adams said the ruling “will put New Yorkers at further risk of gun violence.”

“We have been preparing for this decision and will continue to do everything possible to work with our federal, state, and local partners to protect our city,” Adams went on. “Those efforts will include a comprehensive review of our approach to defining ‘sensitive locations’ where carrying a gun is banned, and reviewing our application process to ensure that only those who are fully qualified can obtain a carry license … we cannot allow New York to become the Wild West.”

President Biden said in a statement that he was “deeply disappointed” in the ruling, saying it “contradicts both common sense and the Constitution, and should deeply trouble us all.”

“I call on Americans across the country to make their voices heard on gun safety,” the president said. “Lives are on the line.”

By contrast, NYSRPA President Tom King celebrated Thursday’s ruling, saying: “The lawful and legal gun owner of New York State is no longer going to be persecuted by laws that have nothing to do with the safety of the people and will do nothing to make the people safer. And maybe now we’ll start going after criminals and perpetrators of these heinous acts.”

Thursday’s decision was the first big gun rights ruling by the court since 2010, when it ruled 5-4 that the Second Amendment right to keep and bear arms applied to the states via the 14th Amendment. Two years earlier, the court struck down Washington, DC’s handgun ban, affirming Americans’ right to keep firearms for lawful purposes such as self-defense.

In the wake of those rulings, Thomas wrote, federal courts had judged gun control cases based on a two-step process: first, whether state firearm regulations curb activity outside the scope of the Second Amendment followed by whether a “‘core’ Second Amendment right” is affected by the restriction in question.

“Despite the popularity of this two-step approach, it is one step too many,” wrote Thomas, who stated that the baseline for courts considering future gun rights cases must be: “When the Second Amendment’s plain text covers an individual’s conduct, the Constitution presumptively protects that conduct. The government must then justify its regulation by demonstrating that it is consistent with the Nation’s historical tradition of firearm regulation. Only then may a court conclude that the individual’s conduct falls outside the Second Amendment’s ‘unqualified command.’”

In his dissent, retiring Justice Stephen Breyer cited the toll of gun violence, writing: “Since the start of this year alone (2022), there have already been 277 reported mass shootings—an average of more than one per day.”

Breyer then rattled off a list of some of the most notorious US massacres over the last decade, from the December 2012 Sandy Hook Elementary School shooting in Newtown, Conn., to the racially motivated May 14 bloodletting at a grocery store in Buffalo and the May 24 mass shooting at a school in Uvalde, Texas that killed 19 students and two teachers.

“And mass shootings are just one part of the problem. Easy access to firearms can also make many other aspects of American life more dangerous,” added Breyer, who cited road rage incidents, violent riots, domestic disputes, suicides and interactions with police as examples.

“I am not simply saying that ‘guns are bad’,” Breyer went on. “Some Americans use guns for legitimate purposes, such as sport, certain types of employment, or self-defense … Balancing these lawful uses against the dangers of firearms is primarily the responsibility of elected bodies, such as legislatures … That consideration counsels modesty and restraint on the part of judges when they interpret and apply the Second Amendment.”

“A State like New York, which must account for the roughly 8.5 million people living in the 303 square miles of New York City, might choose to adopt different (and stricter) firearms regulations than States like Montana or Wyoming, which do not contain any city remotely comparable in terms of population or density,” the outgoing justice added.

“The primary difference between the Court’s view and mine is that I believe the [Second] Amendment allows States to take account of the serious problems posed by gun violence that I have just described. I fear that the Court’s interpretation ignores these significant dangers and leaves States without the ability to address them.”

In yet another concurring opinion, Justice Samuel Alito responded directly to Breyer’s statement on mass shootings, writing: “Does the dissent think that laws like New York’s prevent or deter such atrocities? Will a person bent on carrying out a mass shooting be stopped if he knows that it is illegal to carry a handgun outside the home?

“And how does the dissent account for the fact that one of the mass shootings … took place in Buffalo?” Alito went on. “The New York law at issue in this case obviously did not stop that perpetrator.”