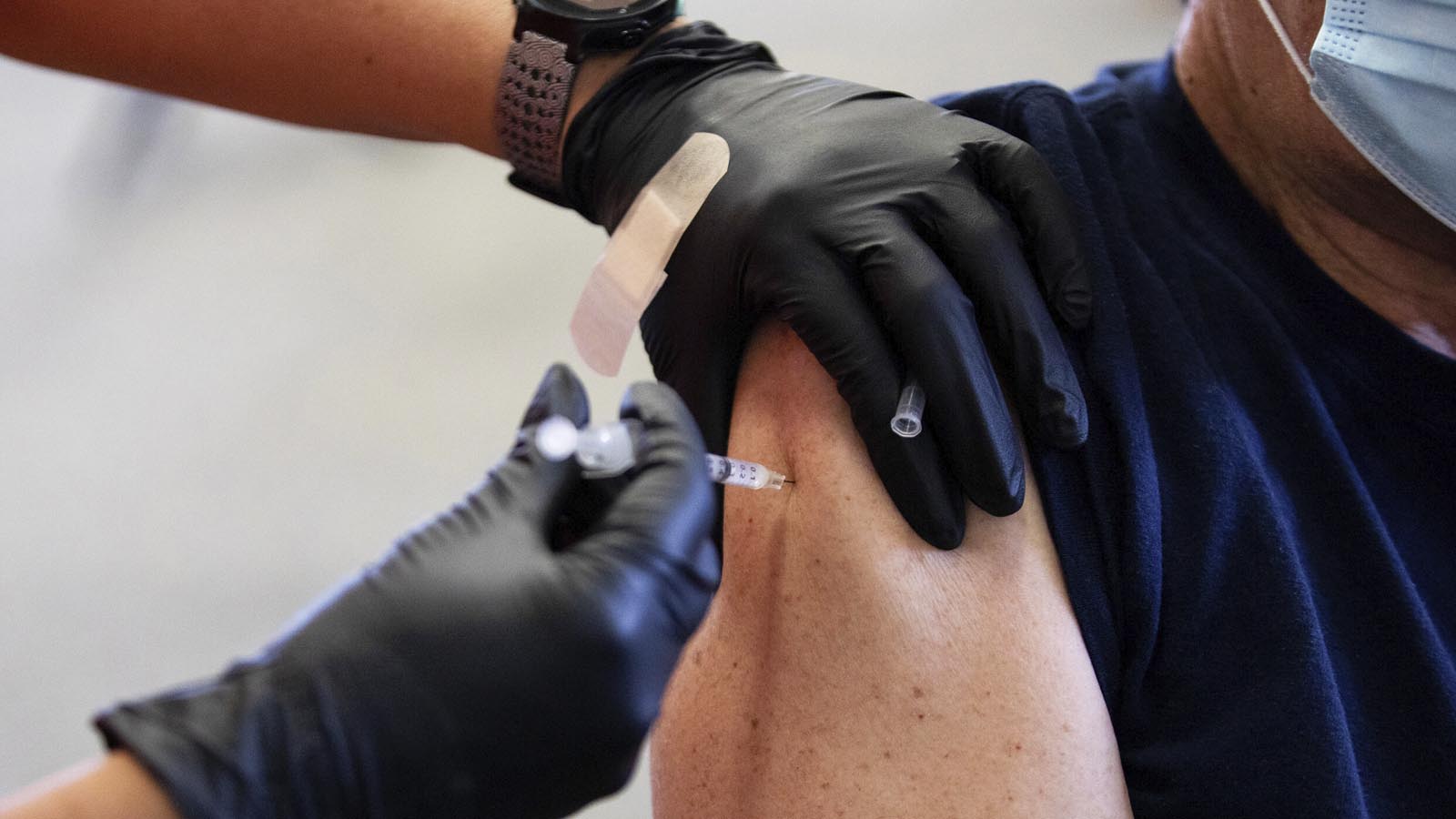 Tolerance is a good thing in most aspects of life. But when it comes to the immune system, artificially juicing up the body to create antibodies with long-term tolerance to a pathogen is a recipe for disaster. Amid thousands of papers on COVID and the vaccines, a new German paper published in Science Immunology should be the headline story this week.

Although the subject matter is very dense, the implication of it is that the Pfizer shots (and possibly other mRNA spike protein shots) caused the immune system to misfire, thereby creating an endless feedback loop of viral immune escape, perpetuating the pandemic in the macro, and creating immune suppression for the individuals who received them.

The vexing question of 2022 is why the virus is even still with us to this day. Why is it that so many countries in the Pacific Rim that did so well in 2020 and 2021 now have a bigger problem in 2022 with less virulent strains of COVID? Why does it appear the pandemic will never end and so many people continue to get the virus multiple times? None of this is normal.

Wherever you turn, the most vaccinated countries are not only experiencing rampant side effects from the shots, but worse outcomes from COVID itself following their endless booster campaigns.

During the last six months, 98% of all reported covid deaths have occurred in nations where more than 1 vaccine dose has been administered per person.

Essentially no deaths are occurring in the unvaccinated nations. pic.twitter.com/QIG7CyMJwc

Portugal is the most vaccinated nation in all of Europe (95% vax'd, 70% boosted) and yet just as many people are dying now as in 2021 and significantly more people than in 2020 (when no one was vax'd and no one had immunity and covid was more virulent).

But even more telling than an epidemiological comparison of one nation to another is a comparison of outcomes within nations themselves between pre- and post-vaccination/booster campaign. Prior to the mass vaccination, two parts of the world largely escaped excess deaths from the virus: continental Africa and the Pacific Rim nations. Yet whereas Africa flatlined in terms of COVID deaths throughout 2021-2022, countries like Japan only experienced meaningful numbers of deaths after the mass vaccination program.

Here is a chart of the daily COVID deaths per million in Japan, a country that is super vaccinated (and mask-obsessed). 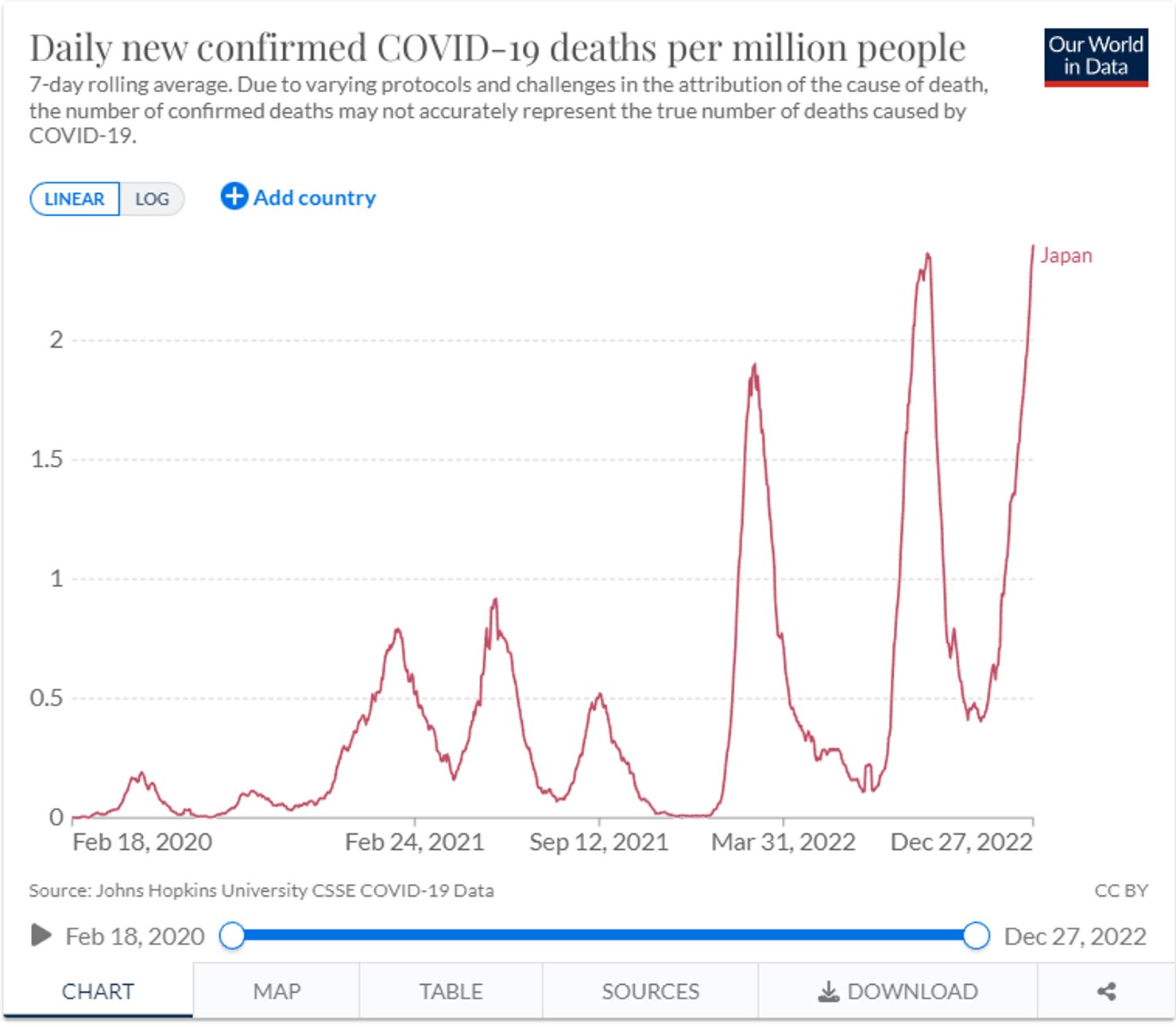 Notice how Japan is experiencing progressively worse death curves, which only began after everyone (particularly seniors) was boosted, even though Omicron is less pathogenic than the earlier strains. Japan is also the current world leader in cases per million.

Australia is a similar story: 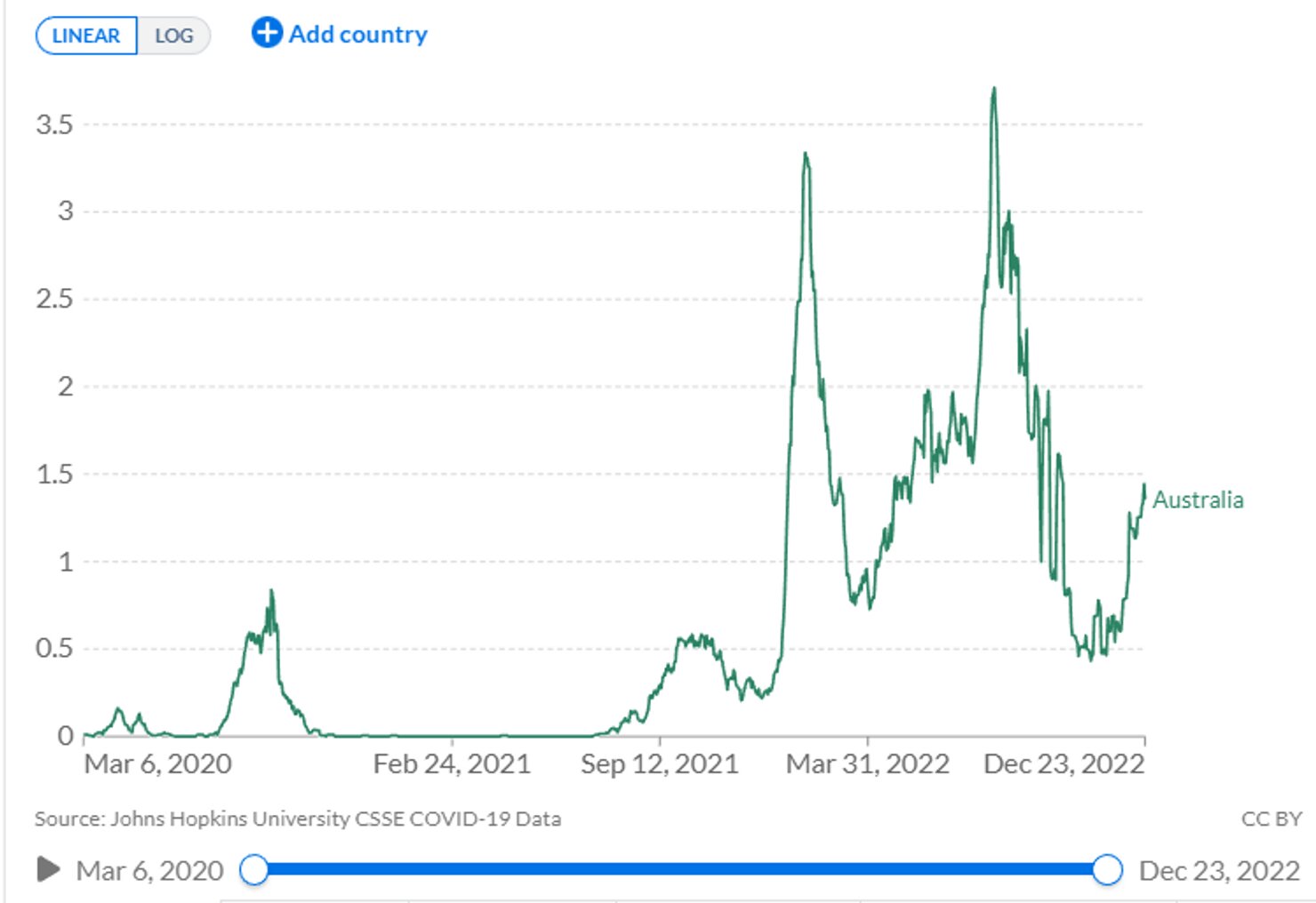 Now contrast these two countries to Nigeria, the most populous country in Africa. 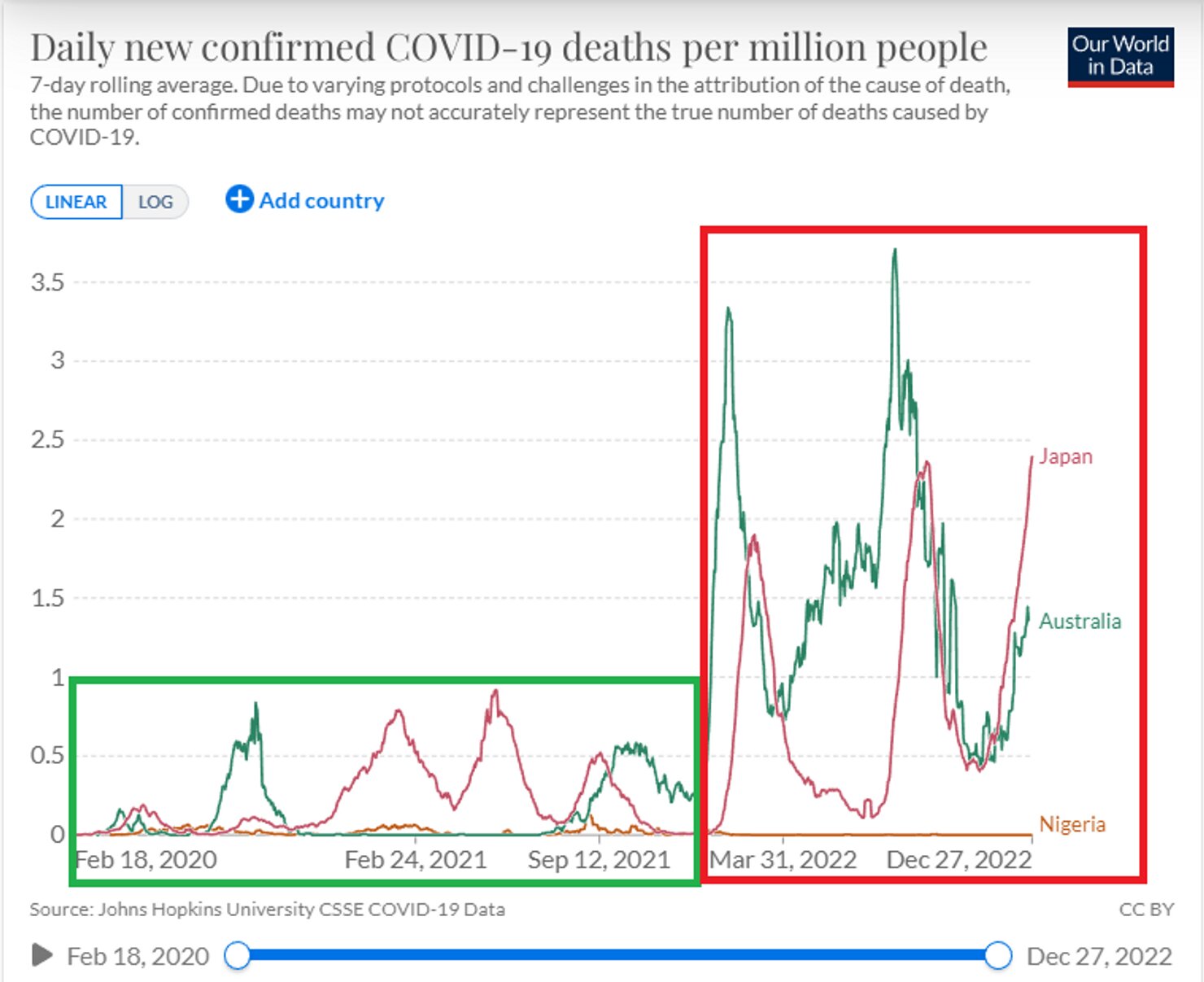 One could assert that there are some unknown factors as to why Africans appear not to die from COVID, compared to the high death rates in North America, South America, and Europe. However, the Pacific Rim countries like Japan and Australia seemed to enjoy almost as low a death rate prior to the booster campaign. After that point, Nigeria (and the rest of Africa) seemed to flatline and be done with the virus, as we would typically expect by now, while the other countries incurred skyrocketing cases and a relatively massive spike in deaths. Obviously, Nigeria’s vaccination rate is much lower than these other countries, but its booster rate is almost nonexistent.

Even within Europe, Scandinavian countries like Norway largely escaped a massive death curve during the first two years of the pandemic. That all changed in 2022. Norway now has the highest COVID death rate per million in the world. 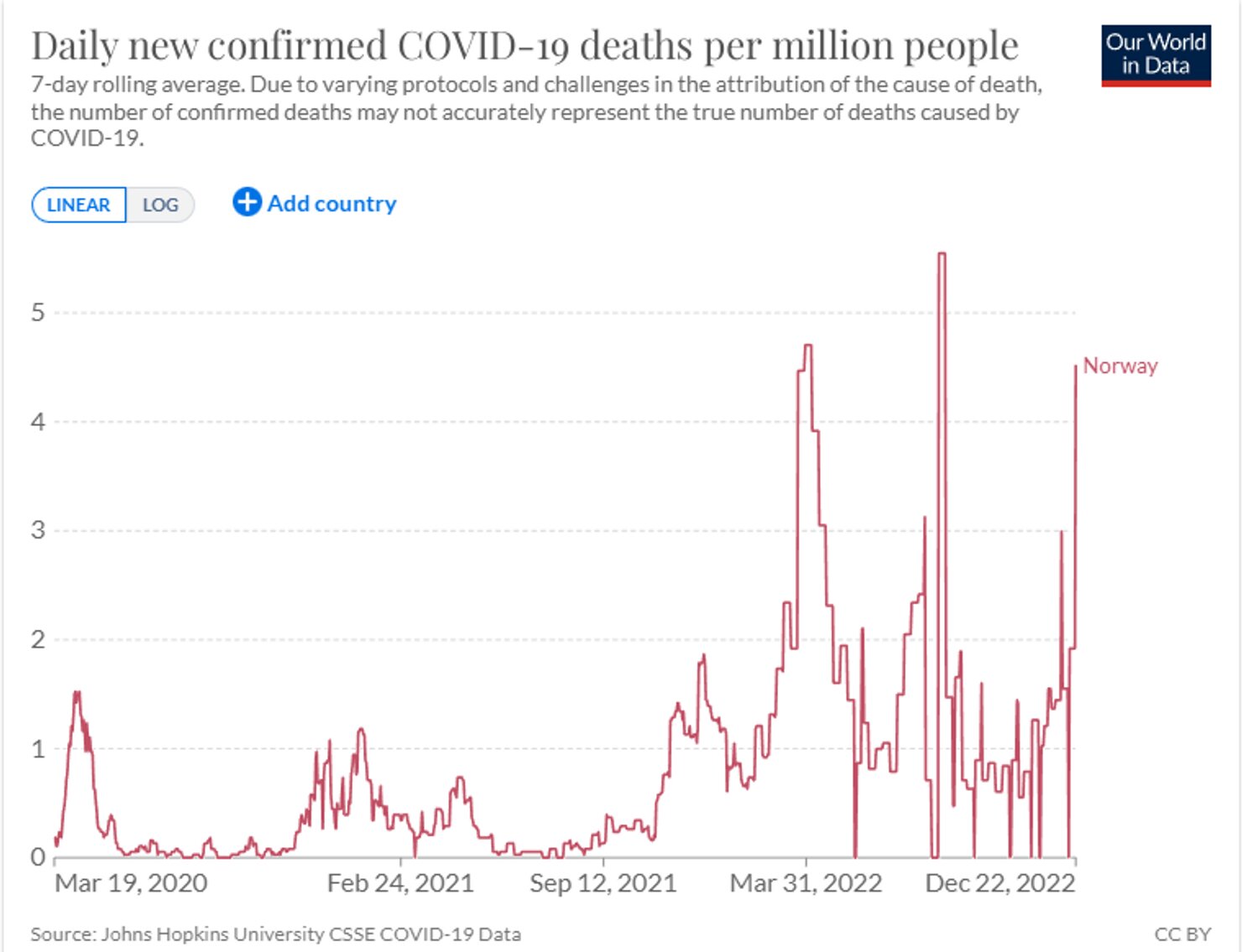 Adding these three Omicron waves together, we see that Norway is beginning to rival the U.S. in terms of death curves. However, America is a much unhealthier country, and America experienced the death curves with the more pathogenic Wuhan and Delta strains.

If you track the number of boosters given per 100 people in some of the aforementioned countries, you will see that the current death curves track almost perfectly in a positive correlation. 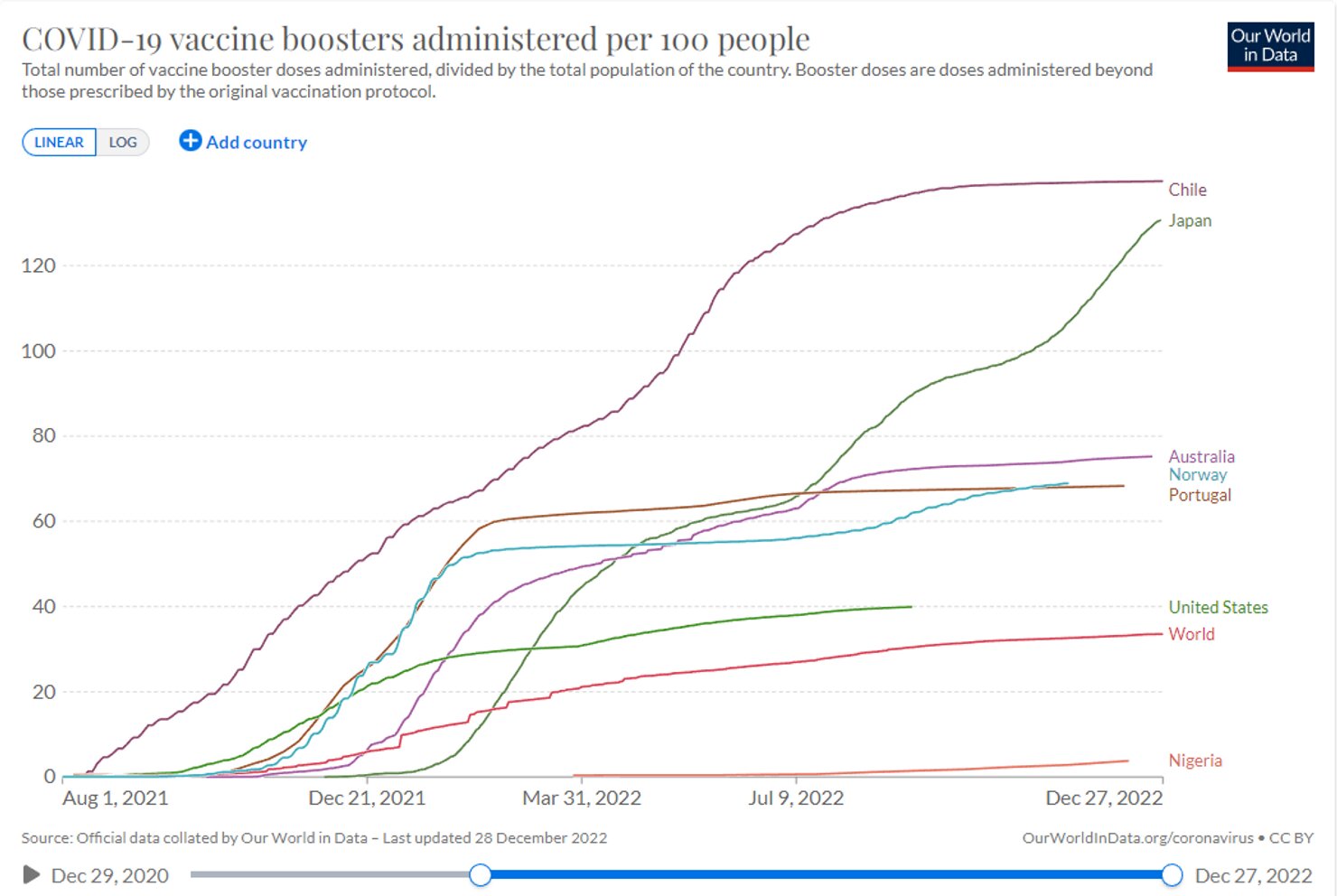 Indeed, Chile now has the most deaths per capita in South America, even though the country already suffered a substantial number of deaths and should be done with the pandemic. Nigeria and the rest of Africa indeed are done with the pandemic, and the U.S., which has an average booster rate, is somewhere in the middle in terms of current COVID rates.

So, this is about a lot more than “oh, the vaccines don’t stop transmission.” They appear to proliferate it and also to worsen clinical outcomes. But why?

A group of German researchers tested for which specific antibody levels spike at what time. Specifically, they tested the Pfizer shot against the AstraZeneca shot and discovered something very concerning. Increasingly over time, and particularly with three doses of Pfizer, the immune response switched from the more neutralizing IgG1 and IgG3 antibodies to the non-neutralizing “tolerating” IgG4 antibodies:

High levels of neutralizing SARS-CoV-2-antibodies are an important component of vaccine-induced immunity. Shortly after the initial two mRNA vaccine doses, the IgG response mainly consists of the pro-inflammatory subclasses IgG1 and IgG3. Here, we report that several months after the second vaccination, SARS-CoV-2-specific antibodies were increasingly composed of non-inflammatory IgG4, which were further boosted by a third mRNA vaccination and/or SARS-CoV-2 variant breakthrough infections. IgG4 antibodies among all spike-specific IgG antibodies rose on average from 0.04% shortly after the second vaccination to 19.27% late after the third vaccination. This induction of IgG4 antibodies was not observed after homologous or heterologous SARS-CoV-2 vaccination with adenoviral vectors [emphasis added].

Why is this so important?

Importantly, this class switch was associated with a reduced capacity of the spike-specific antibodies to mediate antibody-dependent cellular phagocytosis and complement deposition. Since Fc-mediated effector functions are critical for antiviral immunity, these findings may have consequences for the choice and timing of vaccination regimens using mRNA vaccines, including future booster immunizations against SARS-CoV-2 [emphasis added].

So not only do these shots fail to produce the first line of defense antibodies known as IgA in the mucosal, something we knew from day one, but even the blood-based antibodies are increasingly the wrong type. This problem seems to get worse over time and with more doses of the shot, which correlates perfectly with numerous studies showing negative efficacy increasing over time, with more doses, and how the vaccinated take longer to clear the virus.

This topic is both very dense and fascinating. You can find clear explanations of this study about IgG4 antibodies in layman’s terms here, here, and here. But the important outcome for us from a policy standpoint is understanding the deadly subterfuge that has been foisted upon 5.5 billion people of the world and how it will be used with many more novel vaccines coming down the pipeline. The medical establishment successfully convinced the world that a vaccine is nothing more than simply stimulating an antibody response and is something that can be done within days of discovering a virus. This is why they now seek to get vaccines approved not based on accurate clinical trials and clinical outcomes but on “immunobridging” – the measuring of antibody levels. Indeed, this is how they got the bivalent booster shots and the JYNNEOS monkeypox vaccine approved and how they plan to get future shots approved.

However, merely measuring antibody levels in the abstract is meaningless and potentially masks harms to the body. God designed our bodies to create the right sort of antibodies, in the right amount, at the right time, in the right place. Any fault in any of those factors can create auto-antibodies, Trojan horse antibodies (antibody dependent disease enhancement) or a misfiring of the immune system, which is some form of original antigenic sin or pathogenic priming that teaches the body to tolerate a specific strain of the virus or respond for a wrong strain. This is why vaccines take years to develop. And this is before we even discuss the fact that these shots are not even vaccines, but are gene therapies that code your body to produce a pathogenic spike that was the result of gain-of-function research and seems to potentially damage every organ system, particularly the cardiovascular system.

In the case of the COVID shots, what the German study discovered is that over time and with increased doses it actually trains your body to tolerate rather than fight the virus it was designed to destroy. The other class of blood-based antibodies are designed to neutralize pathogens; however, the IgG4 class was specifically designed to tolerate innocuous cells (that don’t reproduce) that it repeatedly contacts, such as pollen or peanut particles. They serve an important role and help ensure that people don’t respond with excessive inflammation to everyday encounters with pollen, but to see 20% of the antibody response to SARS-CoV-2 (it was as high as 42% in those experiencing infection after boosters) be something that tolerates it is astounding … and dangerous! In other words, whereas your IgG1 or IgG3 antibodies are like the SWAT team, your IgG4 antibodies are like social workers. You don’t want social workers responding to replicating pathogens like the SARS-CoV-2 spike.

The long-term implications of this study are still unclear, but like every earth-shattering finding, this one will not be studied by governments. If this shot is really upregulating an IgG4 response for most of the population, it could easily explain why herd immunity is out the window with SARS-CoV-2. It’s literally teaching the body to not only respond to the wrong pathogen but to tolerate its existence and not remember to fight it. Also, what does this mean long-term for people who don’t create pro-inflammatory antibodies to defend against pathogens? What sort of damage is being done by not having the virus sufficiently neutralized before it invades the system so deeply?

As Kilian Schober, one of the authors of the study, notes (after calling our interpretation of the study too “simplistic”),”Our findings do, however, raise some questions about how to proceed.” But in the past, we used to answer those questions before experimenting on humans, not begin to raise them (and then never answer them) after 5.5 billion people were already injected with the product.