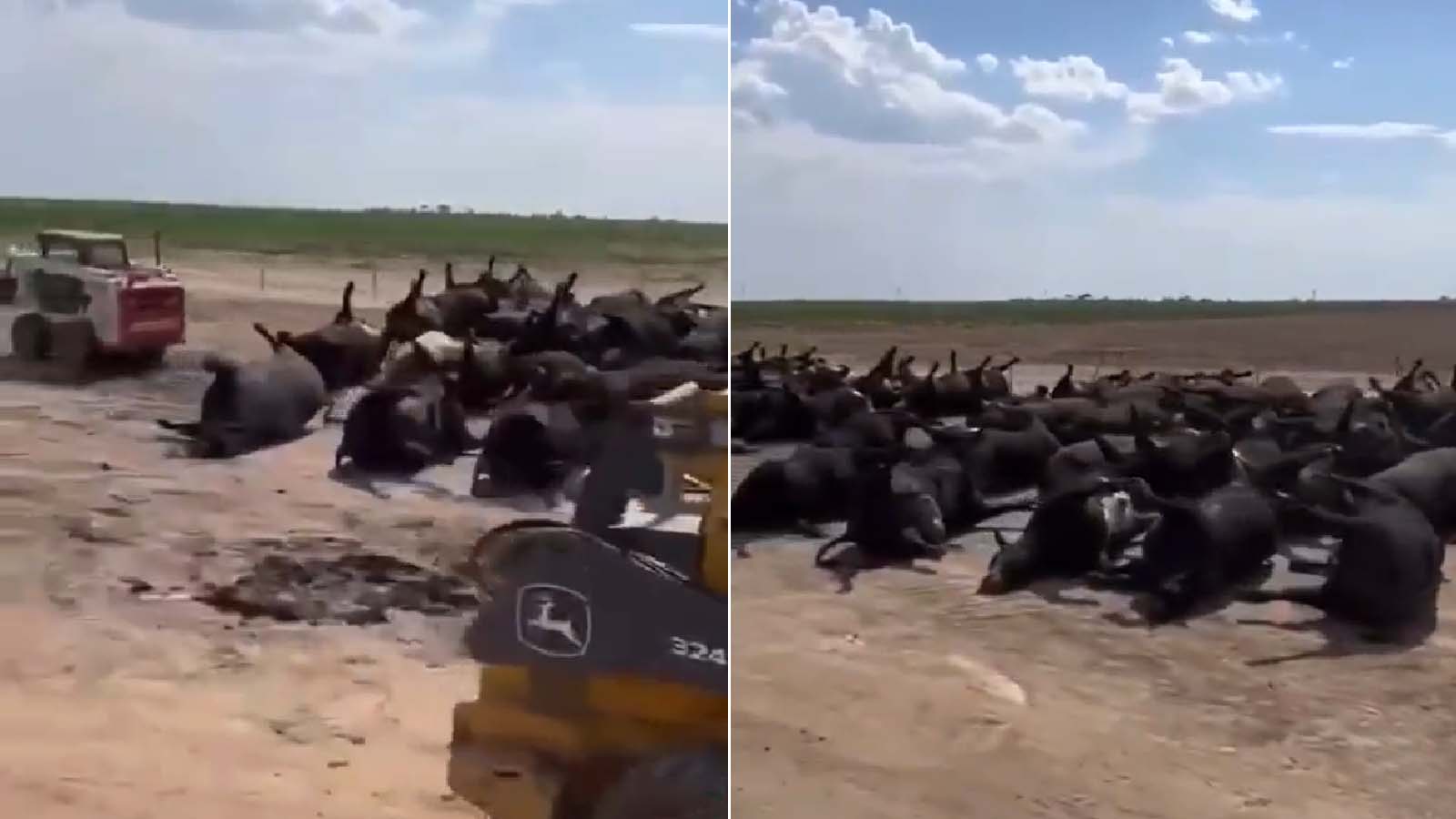 Chaos in food supply chains continues to worsen as thousands of cattle across Kansas have mysteriously died. Officially, at least 2,000 cattle died of “extreme heat and humidity” amid triple-digit temperatures, however skeptics aren’t buying it as viral footage shows hundreds of cows laying upside down.

🇺🇸 On a ranch in the southwest of the state of Kansas alone, more than 3,000 cattle suddenly fell dead last weekend. According to the farmers, there is no plausible explanation for this mass extinction. Cases like this are currently accumulating in the USA. pic.twitter.com/tj6vZ9uNGq

The high-end of estimates comes from Progressive Farmer Senior Editor Victoria Myers, who reports preliminary estimates from feedlot or feed yards that show 10,000 fat cattle across the state have died because of scorching hot weather.

“What is known is that leading up to these heartbreaking losses, temperatures in the area were over 100 degrees Fahrenheit, there was humidity, and there was little to no wind to help cool the animals. Temperature readings reported for Ulysses began to exceed the 100-degree mark on June 11. By June 13, the high temperature was reported at 104 degrees, with humidity levels ranging from 18% to 35%. Temperature and humidity levels began to break some on June 14. Just a few days prior to the heat setting in, highs had been in the 80s,” Myers said.

The Kansas Department of Health and Environment told Reuters they only know of at least 2,000 cattle deaths due to high temperatures and humidity as of Tuesday.

One farmer insists “wasn’t the heat.”

Others had similar commentary:

Bloomberg weather models show high temps across Kansas have been range-bound between 95-100 degrees Fahrenheit since Saturday and could persist through the 25th of the month.

What’s odd is that Texas, the state with the highest concentration of cows, is experiencing even hotter weather than Kansas and has thus far yet to experience mass cow deaths.

Corbitt Wall, a cattle analyst with National Beef Wire, told Progressive Farmer that two non-media sources had described the extent of the Kansas losses. He said there is so much frustration among farmers and pointed out futures markets fell on Monday despite the losses.

“I know it’s hard for people in the business to watch that futures market, but it’s not real,” Wall said. “The only time those traders and speculators make money on futures is when the market is volatile, and they are watching these algorithms to tell them where the market is going. For people following the fundamentals, it is frustrating.”

Kansas State University veterinarian A.J. Tarpoff called the loss a “perfect storm” of too much heat and no opportunity for nighttime cooling that stressed the cattle.

“Heat stress doesn’t happen all at one time. Cattle accumulate heat during the day, and then over the nighttime hours, it takes four to six hours for them to dissipate that heat. As long as we have a cooling effect at night, cattle can mostly handle the heat. Where we run into issues is where we have two to four days in a row of minimal nighttime cooling, and we start the day with the heat load we accumulated the day before still there,” Tarpoff said.

So was it the heat that killed the cows or something else?