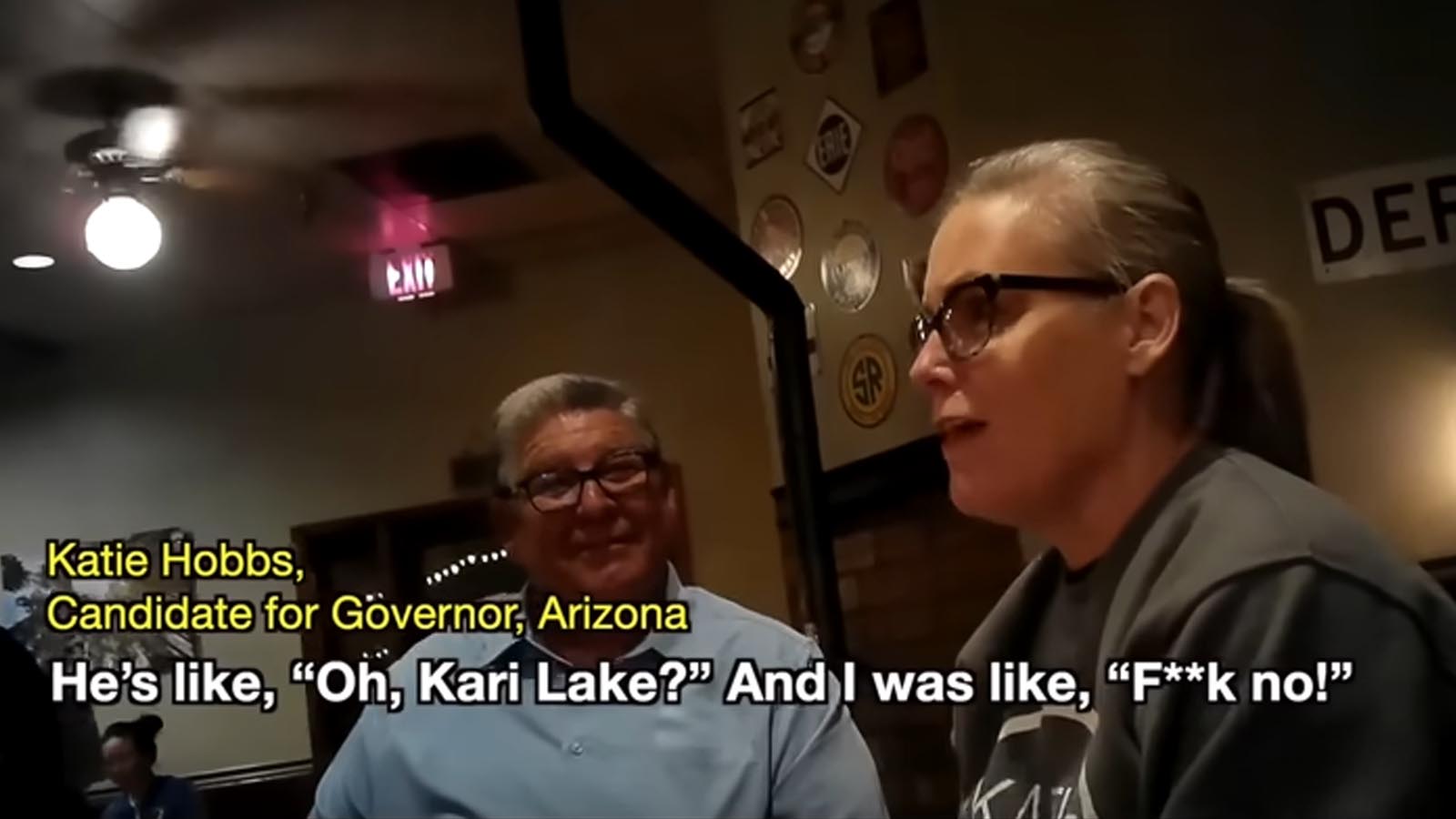 Project Veritas has delivered again. The undercover journalism operation dropped a blistering undercover video compilation on Tuesday exposing Katie Hobbs and several members of her campaign. In it, viewers get a deep dive into the thinking behind Hobbs not debating Kari Lake, as well as some juicy statements that may not sit well with Arizona voters.

I have no idea how Project Veritas got this close to Katie Hobbs given the more intimate nature of some of the conversations shown, but hats off to them for doing so. Their journalists are out there putting in work and deserve recognition.

The video shows numerous undercover clips of Hobbs, her campaign manager, her political strategist, and several other positions in her campaign. The Post Millennial provides some telling excerpts, which we’ll get to in a moment. But first, here’s the full video on YouTube, which is a little under eight minutes long.

If you can’t watch the video, I’ll do my best to hit the highlights. In one clip, you see Joe Wolf, Hobbs’ head political consultant, revealing that the campaign thinks Arizonans are “crazy about their guns.” He also indicates that the campaign is purposely lying to voters by refusing to talk about her position on an “assault weapons” ban. Ironically, later in the video, we see that Hobbs herself is protected by…an AR-15.

You can’t make this stuff up.

The Veritas journalist asks, “Would Katie [Hobbs] support something like an assault weapons ban?” to which Wolf says, “If she could, yeah. I mean, the problem is that it’s a federal issue, right?” He later says, “This state is crazy about their guns, so we’re not gonna take the beating for it before she can do anything about it.”

Wolf was later heard in a car saying Hobbs is protected by an AR-15 between campaign stops.

In another segment, Hobbs is heard demeaning an Uber driver with some rather choice language. It’s not anything major, but it does pull the veil back a bit on the Democrat’s personality. The entire “Karen” moniker she’s garnered (yes, I’m taking credit for starting that way back in the summer) is just so perfectly illustrated.

Later in the video, we see a man named Jasper Adams, who is a field organizer, commenting on how amateurish and entitled Hobbs’ campaign is. He opens by saying that he and his cohorts have “lots of concerns” before explaining what he means.

When asked why, Adams said, “Between us, when we had a big staff training, her Communications Director came in and — she’s only been in the job for a few weeks, she was not prepared, and she was like, ‘What are the questions you’re getting that you want an answer for from the campaign? Like, what are we hearing from voters and volunteers?’ And the number one thing is, ‘Why aren’t you debating Kari Lake?’ And she did not have an answer, and it’s like, you gotta know that’s the question that’s coming.”

He later said that “only Democratic voters care. So, they’re not going to lose any votes because Democrats are going to vote for her anyway, which is — which maybe is true. But as a politician, you never want to say, ‘Oh, I’m taking these votes for granted’…I do wonder how much — like whether people actually care about this.”

The fact that Hobbs is taking the election for granted, assuming that she can coast to victory on the backs of hardline Democrats, has been obvious for a while. Still, it’s striking to see it admitted like that. Personally, I think it’s a terrible strategy, and the more Hobbs runs from voters, the more she’s going to hemorrhage them.

There’s a lot more in the video, including comments from Hobbs’ campaign manager about her ducking debates going back to the primary season. This is a woman who is completely unfit for the position she’s running for, and the arrogance apparent in her campaign could and should cost her severely once voters head to the polls.

Meanwhile, you can bet that Kari Lake is going to make hay on these revelations. She’s already been hammering Hobbs for avoiding any possible challenge, whether from the press or during a debate. Now, we have clips of her own campaign staffers admitting they are trying to hide her and that they think voters are dumb enough to not care. I guess we’ll find out, won’t we?