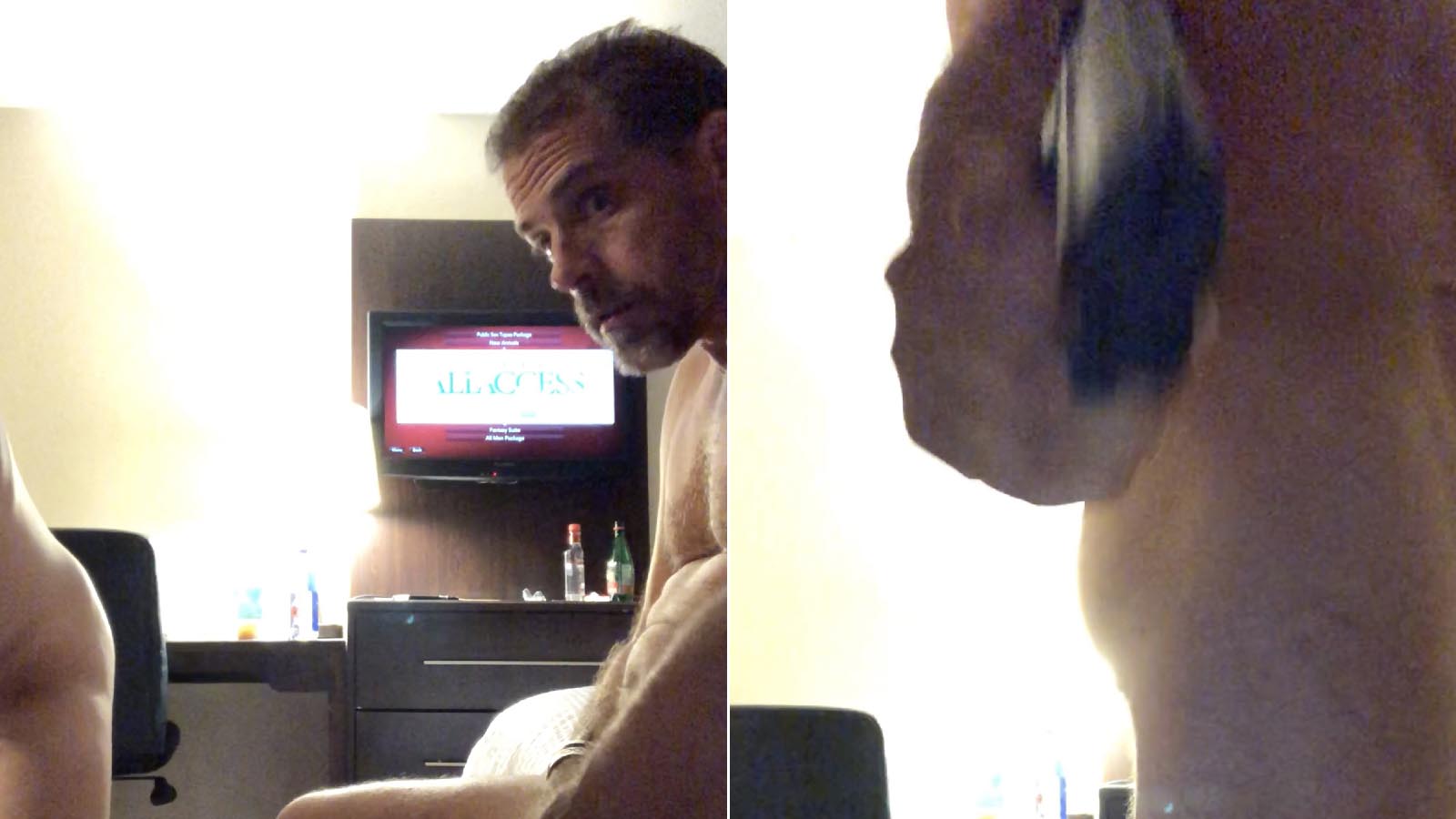 Hunter Biden shows himself to be a real first son-of-a-gun in the latest embarrassing personal video leak for President Biden’s scandal-scarred offspring.

A naked Hunter casually waves around a handgun and even points it at the camera while cavorting with a nude hooker in a swank hotel room, according to video provided to The Post by the nonprofit Marco Polo research group.

The cavalier clip of Hunter Biden holding the apparently illegally obtained weapon emerged amid the rash of mass shootings — and random gun violence in major cities — that included 11 incidents on Saturday and Sunday alone that left at least 15 people dead and 61 injured across the U.S., data shows.

It also came just days after his dad called on Congress to pass new gun-control measures to stem the slaughter, declaring in a televised, primetime address last week that “the Second Amendment, like all other rights, is not absolute.”

“Before proposing or passing any new federal gun legislation the Biden administration ought to enforce existing laws, regardless of who is violating them, even if that person is the president’s son.

“I’ve written oversight letters to the U.S. Secret Service, FBI and ATF regarding the incident involving Hunter’s gun dumped in a trash can behind a grocery store across from a high school in Delaware,” added Johnson, who’s been investigating the Biden family’s controversial overseas business dealings.

“Unsurprisingly, I have not gotten a satisfactory response from these agencies.”

Hunter Biden recorded the video on Oct. 17, 2018, according to Radar Online, which first revealed its existence. The outlet and a Post source described his companion in the video as a prostitute.

In order to make the purchase, Hunter Biden answered “no” to a question that asked, “Are you an unlawful user of, or addicted to, marijuana or any depressant, stimulant, narcotic drug, or any other controlled substance?” Politico reported last year.

Hunter Biden has acknowledged repeated struggles with drug addiction and alcoholism, and Radar’s report included a photo of what appeared to be crack cocaine and drug paraphernalia, including a spoon, on a pair of plates.

Hunter Biden, whose addiction issues and cheating led to his 2017 divorce from Kathleen Buhle, was discharged from the US Navy Reserve three years earlier after testing positive for cocaine.

Just weeks after Hunter illegally bought the weapon, Biden’s lover, Hallie Biden, the widow of his late brother Beau Biden, tossed the gun into a supermarket garbage can, setting off a Secret Service and FBI probe. No charges were ever filed.

The place where the gun was dumped and went missing Janssen’s Market in Greenville, Del., where President Biden has a home in the upscale Wilmington suburb, is across the street from Alexis I. DuPont High School, which has roughly 800 students.

The Secret Service told The Post in March 2021 that it had no record of agents investigating the incident and said President Biden was not under protection at the time.

Hunter Biden had been divorced from his first wife, Kathleen, and was at the time involved in a scandalous romantic relationship with his sister-in-law, Hallie, the widow of his brother Beau, who had died of cancer.

“She stole the gun out of my trunk lock and threw it in a garbage can full to the top at Jansens. Then told me it was my problem to deal with,” Hunter admitted in a 2019 text, first reported by The Post.

“Then when the police, the FBI [and] the secret service came on the scene she said she took it from me because she was scared I would harm myself due to my drug and alcohol problem and our volatile relationship and that she was afraid for the kids.”

The Jan. 29, 2019, message adds: “Really not joking the cop kept me convinced that Hallie was implying she was scared of me.”

In another message, sent closer to the incident, Hunter described the handgun as “my 38.”

“Took from lock box of truck and put it IN PapER BAG AND Threw it in trash can at local high end grocer. For no reason,” he wrote on Dec. 6, 2018.

“And I freaked when I saw it was missing 10 minutes after she took it and when she went back to get it after I scared the s–t out of her it was gone which led to state police investigation of me. True story.”

The downmarket data dump is the latest embarrassment for President Biden courtesy of his son, who has been blasted by critics who insist his shady foreign business dealings have put US national security at risk.

“There is no doubt in my mind that what Hunter Biden did was wrong, being on the [Ukrainian energy company] Burisma board and engaging in whatever else he dealt with,” Democratic congressional candidate Max Rose told The Post last week.

Rose, a former congressman vying for a comeback in his Staten Island district against incumbent GOP Rep. Nicole Malliotakis, said The Post got a “raw deal” upon being censored by social media outlets after first reporting on the existence of Hunter’s abandoned laptop in October 2020.

Mainstream media at the time largely ignored The Post’s October 2020 reports or suggested they were the product of Russian disinformation efforts ahead of the 2020 presidential election.

But both the New York Times and the Washington Post later authenticated for some of the emails amid the federal grand jury probe in Delaware reportedly eyeing possible tax fraud, money laundering and violations of lobbying laws by Hunter Biden.

Congressional Republicans, meanwhile, have vowed to launch five avenues of investigations next year if the GOP gains subpoena power by retaking the House in the upcoming November midterm elections.

Atop the list of concerns for GOP congressmen is Hunter’s controversial overseas business deals, some of which involved the state-controlled Bank of China and other companies linked to the Chinese government, as well as their potential impact on national security, a spokesperson for the minority members of the House Committee on Oversight and Reform told The Post in late April.

The Republicans also want to find out if President Biden stood to make any “financial gain” or had a role in his son’s business affairs, as alleged by former Hunter Biden business associate Tony Bobulinski.

In October 2020, Bobulinski confirmed speculation that the elder Biden was “the big guy” for whom 10 percent of the potential profits from a joint venture with the CEFC China Energy conglomerate would be held by his son and also said the future president “was plainly familiar, at least at a high level,” about “the Biden family’s plans with the Chinese.”

Committee member Jim Jordan (R-Ohio) said he’s also “very concerned” about the open letter signed by 51 former US intelligence officials who said the release of the emails had “all the classic earmarks of a Russian information campaign.”

“That letter becomes the basis for the collusion that took place between Big Tech, Big Media and the Democrats to keep this story from the country in the run-up to the most important election,” Jordan told The Post in late April.

“Any investigation that may take place, I think that’s an important area we need to explore.”