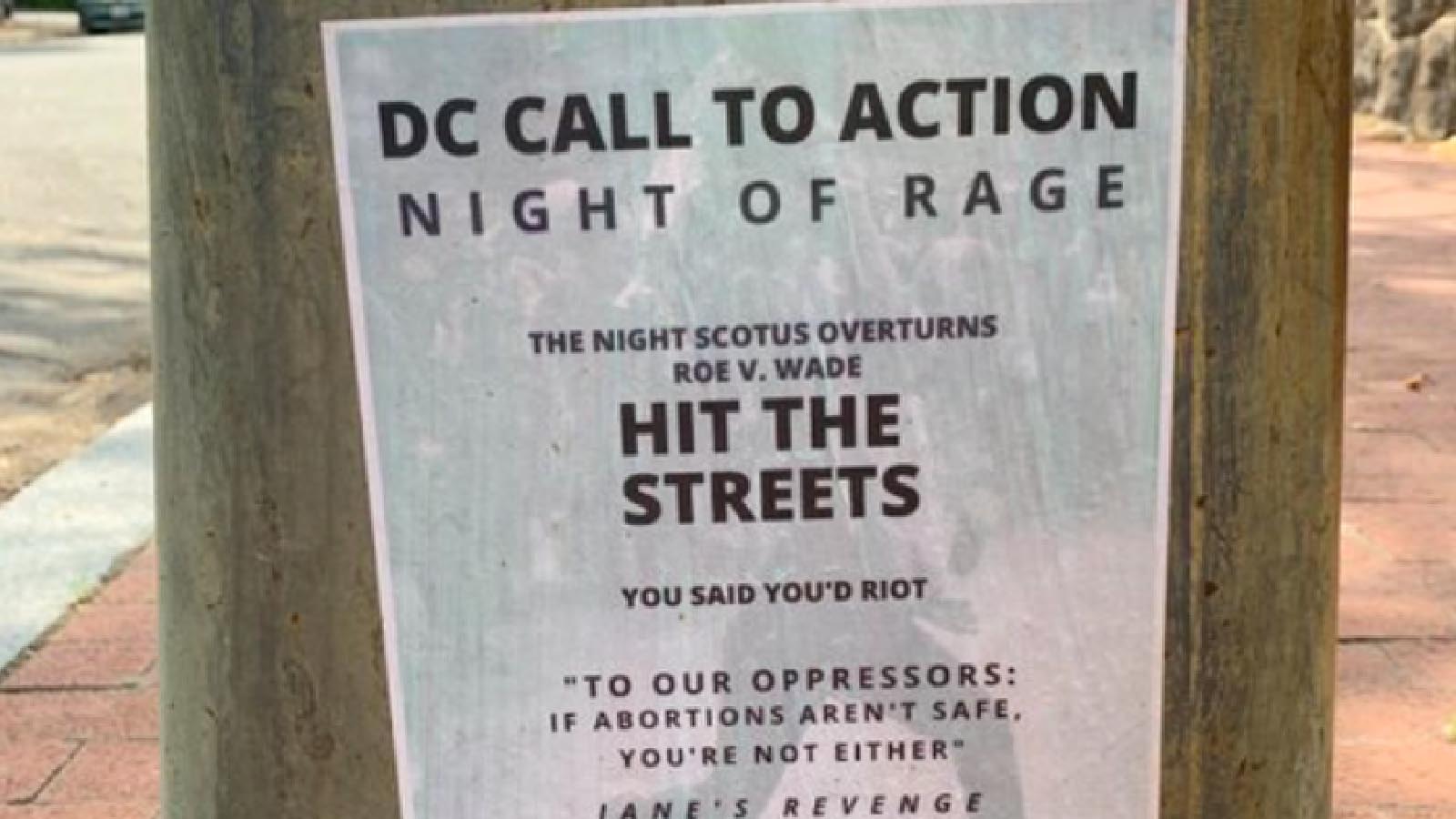 Any day now (likely Thursday), the Supreme Court could publish its final decision on whether or not to overturn Roe v Wade. If the nine Justices overturn the court case, the decision to ban abortions will become a state matter. It would spur demonstrations as disturbing flyers have already begun appearing across Washington D.C., warning about riots if the case is overturned.

National Reviews’ Ramesh Ponnuru tweeted a picture of a flyer slapped on the side of what appears to be a concrete base of a light pole on the side of a street in D.C. The flyer reads:

It continues: “‘TO OUR OPPRESSORS: IF ABORTIONS AREN’T SAFE, YOU’RE NOT EITHER.’ JANE’S REVENGE.”

The pro-abortion group “Jane’s Revenge” signed the flyer and recently declared “open season” on pro-life groups and crisis pregnancy centers. The radical group has a history of damaging property during protests. They took credit for vandalizing a pregnancy resource center in Des Moines, Iowa, earlier this month, said Michael Snyder via The End of The American Dream blog.

Increasing threats of social unrest following the upcoming ruling are concerning and follow the arrest of an armed man outside Justice Brett Kavanaugh’s home. Demonstrators have been outside the homes of conservative Justices while encircled around the Supreme Court building is a security fence and additional security guards.

Ponnuru’s tweet was direct at the Federal Bureau of Investigation to examine the flyer because of its incitement to riot.

“The Jane’s Revenge threats have received little attention in the rest of the press, but we hope the Washington, D.C., and Capitol police are much better prepared than they were for the riots of 2020 and 2021. The Justices and the Court as a democratic institution have to be protected,” the Editorial Board at WSJ wrote Monday.

A letter posted to The Anarchist Library allegedly written by a Jane’s Revenge said the impending decision “is an event that should inspire rage in millions of people who can get pregnant.”

“We need the state to feel our full wrath … We need them to be afraid of us.”

“Whatever form your fury takes, the first step is feeling it. The next step is carrying that anger out into the world and expressing it physically. Consider this your call to action. On the night the final ruling is issued — a specific date we cannot yet predict, but we know is arriving imminently — we are asking for courageous hearts to come out after dark.”

And now, the nation eagerly awaits the Supreme Court’s opinion that could overturn Roe v. Wade and spark a summer of unrest.

The FBI has warned it won’t “tolerate violence, destruction, interference with government functions, or trespassing on government property.”