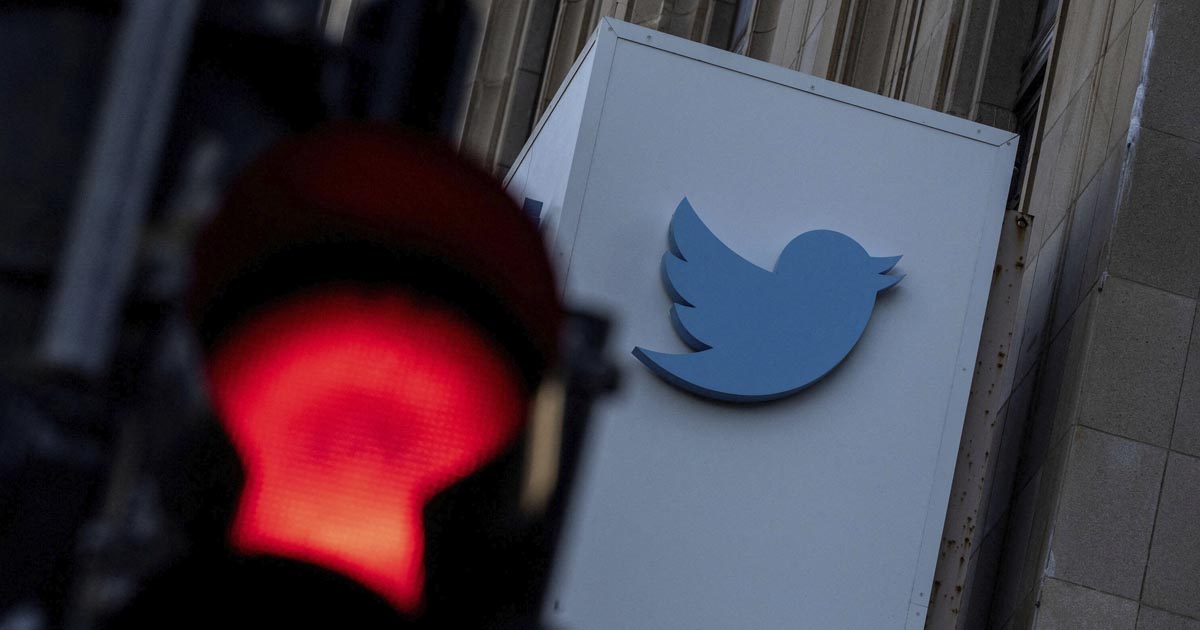 The new editions of Twitter Files keep on coming. Earlier on Monday we were treated to another one to do with COVID-19, in this case specifically as it applied to how Big Pharma was in league with social media to push their narrative.

The latest comes from investigative journalist Lee Fang, who got right to the point in a slightly shorter than usual but still informative thread. This thread, on “How the pharmaceutical industry lobbied social media to shape content around vaccine policy,” explains how vaccine manufacturer and distributor Pfizer partner BioNTech sough to censor those calling for low-cost generic vaccines in low-income countries. 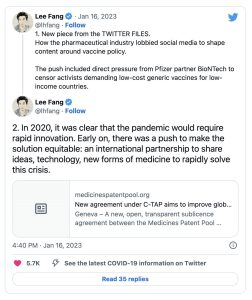 In a revelation that’s hardly surprising, Fang points to how Big Pharma “saw the crisis as an opportunity for unprecedented profit.” This included shutting out others who could help with treatments and vaccines. As Fang put it, “pharma launched a massive lobbying blitz to crush any effort to share patents/IP…”

That meant directly reaching out to the then new Biden administration to demand sanctions against countries that sought to provide low-cost vaccines, with Fang linking to an article he wrote for The Intercept on March 3, 2021. Among those countries that were asked to be punished included Hungary, Colombia, and Chile.

When it comes to the role of social media, Twitter was also among those lobbied, with Fang including an email from BioNTech asking the platform to censor users who asked for generic, low-cost vaccines. In a subsequent tweet he mentions that the request “was also backed by the German government.”

The content moderation team was asked to monitor Pfizer and AstraZeneca accounts, as well as hashtags described as “activist hashtags,” like #peoplesvaccine.

The screenshot of an email mentions how the “authorities are warning about ‘serious consequences’ of the action, i.e. posts and a flood of comments ‘that may violate TOS’ as well as the ‘takeover of user accounts’ are to be expected. Especially the personal accounts of the management of the vaccine manufactures are said to be targeted. Accordingly, fake accounts could also be set up.”

6. Twitter's reps responded quickly to the pharma request, which was also backed by the German government. A lobbyist in Europe asked the content moderation team to monitor the accounts of Pfizer, AstraZeneca & of activist hashtags like #peoplesvaccine pic.twitter.com/Bt9YNJUlN1

When it comes to the “fake accounts,” however, they were real people, ones Fang claims to have talked to. He also embeds tweets from one such user.

Unfortunately, though, Fang notes it’s not clear what, if any, actions Twitter took with regattas to such a request. If Twitter did take action, though, it would be despite many of the platform’s employees acknowledging that such activism was not abuse. Nevertheless, the tweets were still monitored.

8. It's not clear what actions Twitter ultimately took on this particular request. Several Twitter employees noted in subsequent messages that none of this activism constituted abuse. But the company continued monitoring tweets.

Such a push was not the only one that Fang details between BIO, the lobbying group for Pfizer and Moderna, and Twitter. In this instance, BIO funded “a special content moderation campaign” from Public Good Projects (PGP), which worked with the platform to set up content moderation rules around what was designated COVID “misinformation.”

As we’ve seen already, there’s been plenty there when it comes to Twitter censoring accounts over so-called “misinformation,” especially as it pertains to the pandemic.

While Fang does point out how many of the targeted tweets included “truly unhinged misinfo,” such as claims about microchips, there were others that “were more of a grey area,” such as questions about the point of vaccine passports and vaccine mandates.

Fang includes an email from the senior director of strategic partnerships with PGP, whose name is blocked out, to show examples of how PGP would email Twitter with their weekly findings about which specific accounts they wanted taken down or verified.

12. The Moderna/Pfizer-funded campaign included direct regular emails with lists of tweets to takedown & others to verify. Here's an example of those types of emails that went straight to Twitter's lobbyists and content moderators. Many focused on @zerohedge, which was suspended. pic.twitter.com/wNPPx1IiRD

In a move that Fang calls “notabl[e], the censorship push didn’t apply to drug companies. “The rules applied only to critics of industry.”

How could we expect anything else?

14. Here is my reported piece w/more detail. I was given some access to Twitter emails. I signed/agreed to nothing, Twitter had no input into anything I did or wrote. The searches were carried out by a Twitter attorney, so what I saw could be limited. https://t.co/McEaKZ2MKX

These batches often reveal what many people already knew or at least suspected, but there’s something about seeing it confirmed out in the open, especially when it comes to how the powers that be handled the pandemic.

Like previous editions, Fang’s latest contribution was included in the Monday edition for RealClearPolitics.

“Moderna” has been trending on Twitter on Monday, with many calling them and Pfizer out after the latest Twitter Files reveal.