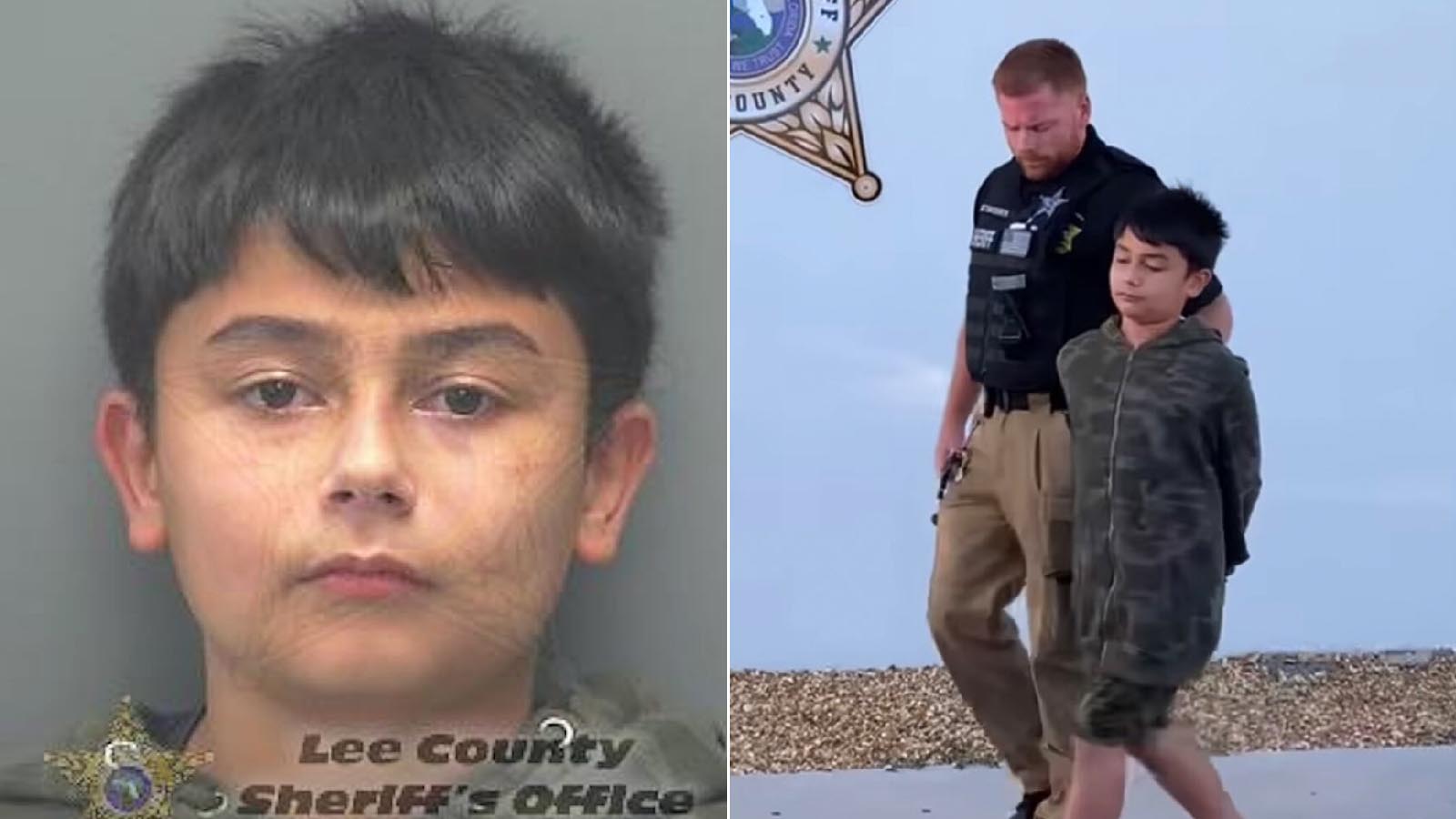 Florida authorities Monday released the mugshot and arrest footage of a 10-year-old boy accused of threatening to shoot up his school, with the local sheriff calling the move just desserts for a suspected criminal.

“I did a campaign: Fake threat, real consequence,” Lee County Sheriff Carmine Marceno told W Radio in Colombia. “While I understand the boy is 10 years old, his brain’s not fully developed, he’s a juvenile, I have to tell you: When a 10-year-old presses a trigger, the aftermath is the same regardless of the age.”

The sheriff’s office posted video to Facebook showing Daniel Isaac Marquez — a fifth-grader at Patriot Elementary School in Cape Coral — being arrested Saturday for the alleged text-message threat, which was forwarded to deputies by a tipster May 28.

Daniel was shown being led off with his hands cuffed behind his back while dressed in blue Crocs and a camouflage, hooded, zip-up sweatshirt and matching shorts.

Marceno spoke about the baby-faced suspect to W Radio, saying Daniel told a friend in a text message about “wads of cash” and to “get ready” for him to carry out the mass shooting.

“I scammed my friend,” the boy allegedly wrote in the text, which included a Google image of money, according to an arrest report.

Daniel then allegedly shared an image of four assault rifles he said he bought and told his buddy to “get ready for water day” — referencing a recent school-sponsored event in which students participate in water activities.

“We don’t wait 1 second,” Marceno said of looking into the boy’s threat. “We investigate every threat as if it’s real.

“We have zero tolerance,” he said. “Our children are going to be safe no matter what.

“So, what we need to do is, I beg the parents to sit with your children … We need to do everything we can as a team to prevent these types of issues and not ignore the red flags.”

The boy was charged as a juvenile with making a written threat to conduct a mass shooting, Marceno said.

Later in the interview, Marceno spelled out his department’s response to a would-be school shooter.

“You don’t get to come into one of my schools in my county and present deadly force,” Marceno said. “Because we meet deadly force with deadly force, without one second, without hesitation. If you think you’re going to come and kill a child, a teacher or a faculty member, think again — we will kill you immediately.”

The pint-size perp was arrested one day before a Florida man, Corey Anderson, 18, was busted Sunday at a home in Lutz after making an online threat while posting photos of himself with what appeared to be a rifle, handgun and tactical-style vest, according to the Hillsborough County Sheriff’s Office.

The chilling photo was accompanied by a caption that read, “Hey Siri, directions to the nearest school,” authorities said.

Investigators later determined the handgun and rifle in Anderson’s photo were airsoft guns, which shoot pellets rather than bullets.

The twin threats in Florida came just days after a gunman stormed into Robb Elementary School in Uvalde, Texas, with a pair of AR-15-style rifles and killed 19 fourth-graders and two teachers on Tuesday. The massacre was the deadliest school shooting since 26 people — including 20 students — were killed at Sandy Hook Elementary School in Connecticut in December 2012.