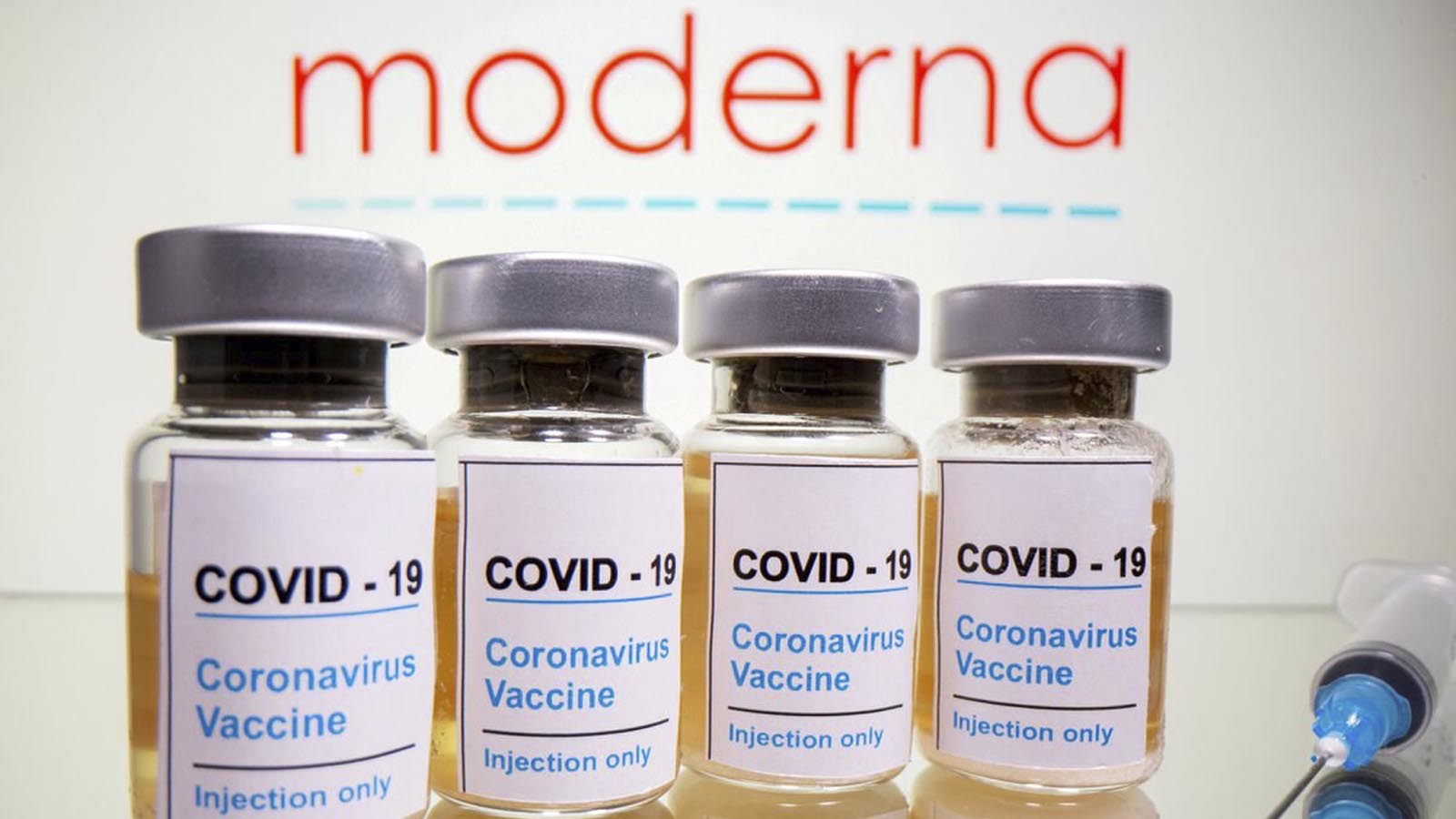 Moderna documents regarding their COVID vaccine trial on animals, obtained via a Freedom of Information Act request by Judicial Watch, showed that some of the offspring of rats that were injected with Moderna’s mRNA shot developed rib malformations.

The 700 pages contain a portion of the formal Biologics Licensing Application (BLA) package that a manufacturer is required to submit to the FDA for approval.

The documents have not yet been made public, but were analyzed by former pharma executive Alexandra Latypova and reviewed by The Epoch Times.

Included in the documents are test results that show that Moderna mRNA shots caused statistically significant skeletal malformations in the offspring of the rats that took the mRNA-1273 (Spikevax mRNA) doses.

“mRNA-1273-related variations in skeletal examination included statistically significant increases in the number of F1 rats with 1 or more wavy ribs and 1 or more rib nodules. Wavy ribs appeared in 6 fetuses and 4 litters with a fetal prevalence of 4.03% and a litter prevalence of 18.2%. Rib nodules appeared in 5 of those 6 fetuses,” according to Moderna’s internal documents.

F1 refers to the rat offspring and litter indicates a group-birth of rats.

“Maternal toxicity in the form of clinical observations was observed for 5 days following the last dose (Gestation Day 13), correlating with the most sensitive period for rib development in rats (Gestation Days 14 to 17)” the documents state. 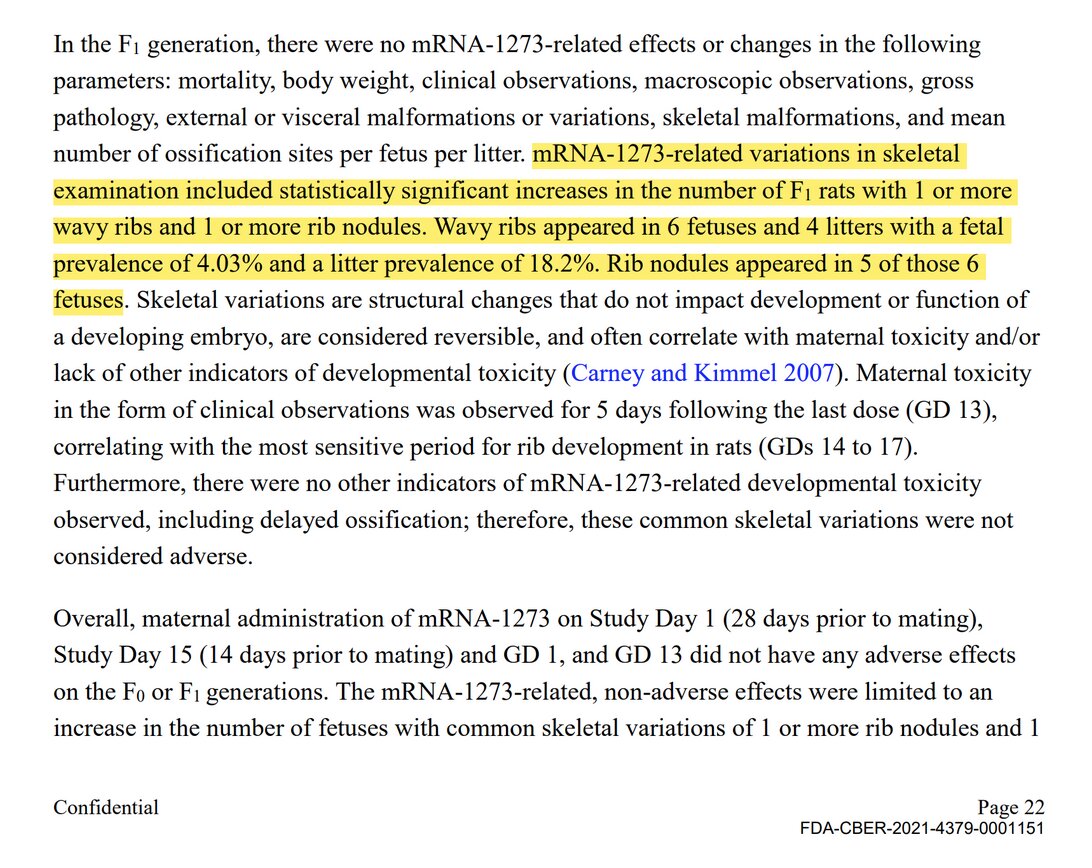 In other words, 6 out of about 149 baby rats had wavy ribs and 5 of those also had rib nodules.

“1/2 rats euthanized before delivery to examine fetuses, the rest followed to 21 days after delivery,” Latypova stated, “No numbers are provided for the study size.”

In addition, there is no study report, but only Moderna’s own interpretation of the outcomes.

It is not known how the dose translates from humans to rats.

“Neither Moderna nor Pfizer provided any dose calculations or justification information for dose selection in animal studies,” Latypova told The Epoch Times.

“Doses of drugs, or especially biologics do not necessarily have linear relationships with toxicity or efficacy. It is likely a much more complex relationship and unfortunately not known at all.”

“Reproductive toxicology is the study of adverse effects of medicinal products on reproduction. The FDA requires reproductive toxicity testing for any NME to be used in women of childbearing potential,” added Latypova, who has worked in more than 60 pharmaceutical companies, mainly focusing on creating and reviewing clinical trials, many of which were submitted to the FDA.

Despite the abovementioned lab results, the FDA issued a statement on Jan. 30 saying that there were no adverse effects on postnatal developments.

“No vaccine-related fetal malformations or variations and no adverse effect on postnatal development were observed in the study,” the FDA stated on the label for Moderna’s Spikevax vaccine.

“In a developmental toxicity study, 0.2 mL of a vaccine formulation containing nucleoside-modified mRNA (100 mcg) and other ingredients that are included in a 0.5-mL single human dose of SPIKEVAX was administered IM to female rats on four occasions: 28 and 14 days prior to mating, and on gestation days 1 and 13,” reads the FDA publication.

In August of 2021, Elsevier published a peer-reviewed study (pdf) titled “Lack of effects on female fertility and prenatal and postnatal offspring development in rats with BNT162b2, a mRNA-based COVID-19 vaccine.”

All the authors of the publication were employed by Pfizer, BioNTech, or Charles River, a Pfizer contractor.

This publication suggests that there was a “lack of effects” in postnatal offspring development, but the study shows that there was a 295 percent increase (8.3 percent compared to 2.1 percent in the control group) in abnormal ribs in vaccinated rat offspring. A huge increase in what is described as the “supernumerary lumbar.”

‘This Was an Extremely Dangerous Warning’

“Skeletal abnormalities in the bony rib cages are absolutely important and were statistically increased in the rat offspring of the experimental group compared with the placebo group,” James Thorp, an MD board-certified in obstetrics and gynecology, as well as maternal-fetal medicine, told The Epoch Times after reviewing Latypova’s analysis of Moderna’s BLA package.

“In clinical obstetrics and maternal-fetal medicine we see similar findings in skeletal abnormalities prior to birth that are extremely serious and often lethal. This was an extremely dangerous warning signal in reproductive toxicology studies and was never brought to the light of day to protect our global citizens. The CDC, Pfizer, Moderna, and the flagship medical journals of the medical industrial complex lied to the American public and should be held accountable,” Thorp said.

The CDC website recommends the COVID vaccines during pregnancy in order to “prevent severe illness and death in pregnant women.”

The American College of Obstetricians and Gynecologists also “strongly recommends that pregnant individuals be vaccinated against COVID-19,” adding that pregnant women’s complete vaccination should be a “priority.”

US Embassy in Russia Warns Americans to Flee ‘Immediately’

A former Polish Defense Minister, Radek Sikorski, has attributed to the United States the sabotage of two pipelines, Nord Stream 1 and 2, which...