Two days after leftists harassed Supreme Court Justice Brett Kavanaugh at a Washington, D.C., restaurant, the group ShutDownDC said it will pay a bounty for its next chance to find one of the justices who overturned the Roe v. Wade ruling.

Kavanaugh was joined by Justices Samuel Alito, Clarence Thomas, Neil Gorsuch, Amy Coney Barrett and John Roberts in ruling that the 1973 decision legalizing abortion amounted to an incorrect interpretation of the Constitution.

“DC Service Industry Workers… If you see Kavanaugh, Alito, Thomas, Gorsuch, Coney Barrett or Roberts DM us with the details! We’ll venmo you $50 for a confirmed sighting and $200 if they’re still there 30 mins after your message,” ShutDownDC tweeted on Friday. 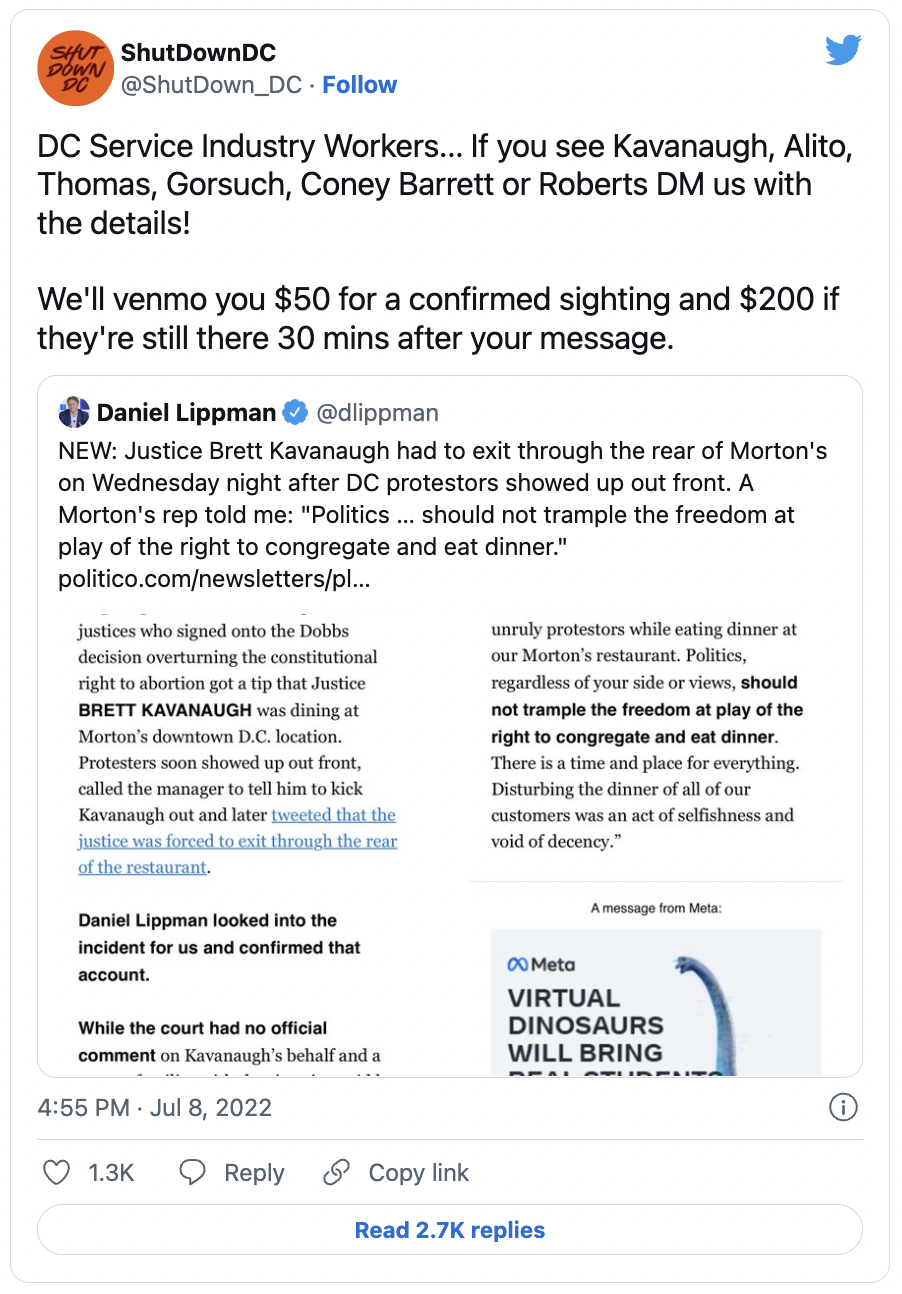 Fox News asked Twitter why the post was allowed to remain up, given that it seems to violate Twitter’s rules. As of Friday afternoon, no reply had been received, and the tweet was still up as of Saturday evening.

Twitter claims to prohibit users from calling for the harassment of others.

“We prohibit behavior that encourages others to harass or target specific individuals or groups with abusive behavior,” Twitter’s rules state. “This includes, but is not limited to; calls to target people with abuse or harassment online and behavior that urges offline action such as physical harassment.”

On Wednesday, activists linked to ShutDownDC protested outside a steakhouse while Kavanaugh was eating there. He eventually left through a rear door.

“Supreme Court Justice Kavanaugh and all of our other patrons at the restaurant were unduly harassed by unruly protestors while eating dinner,” the restaurant said in a statement to Politico. “Politics, regardless of your side or views, should not trample the freedom at play of the right to congregate and eat dinner.

“There is a time and place for everything. Disturbing the dinner of all of our customers was an act of selfishness and void of decency,” the statement said.

The incident sparked some byplay between Peter Doocy of Fox News and White House press secretary Karine Jean-Pierre during a Friday briefing.

Doocy on Kavanaugh being forced out of a DC restaurant by protesters: "So these Justices, because protesters do not agree with an opinion… have no right to privacy?"

Jean-Pierre: "This is what a democracy is."pic.twitter.com/26EIf4ptiZ

As Doocy tried to get Jean-Pierre to indicate where the line was drawn between protest and harassment, she replied, “Well, we have said that we want to see peaceful protests. That’s what we have said. We want to see the protests be peaceful. But when it comes to intimidation, that is something that we have condemned.”

“Peaceful protest — people should be allowed to be — to be able to do that,” she said.

“In a restaurant?” Doocy asked.

“If it’s outside of a restaurant, if it’s peaceful, for sure,” she said, later ending the back-and-forth with a curt, “I’m done here, Peter.”