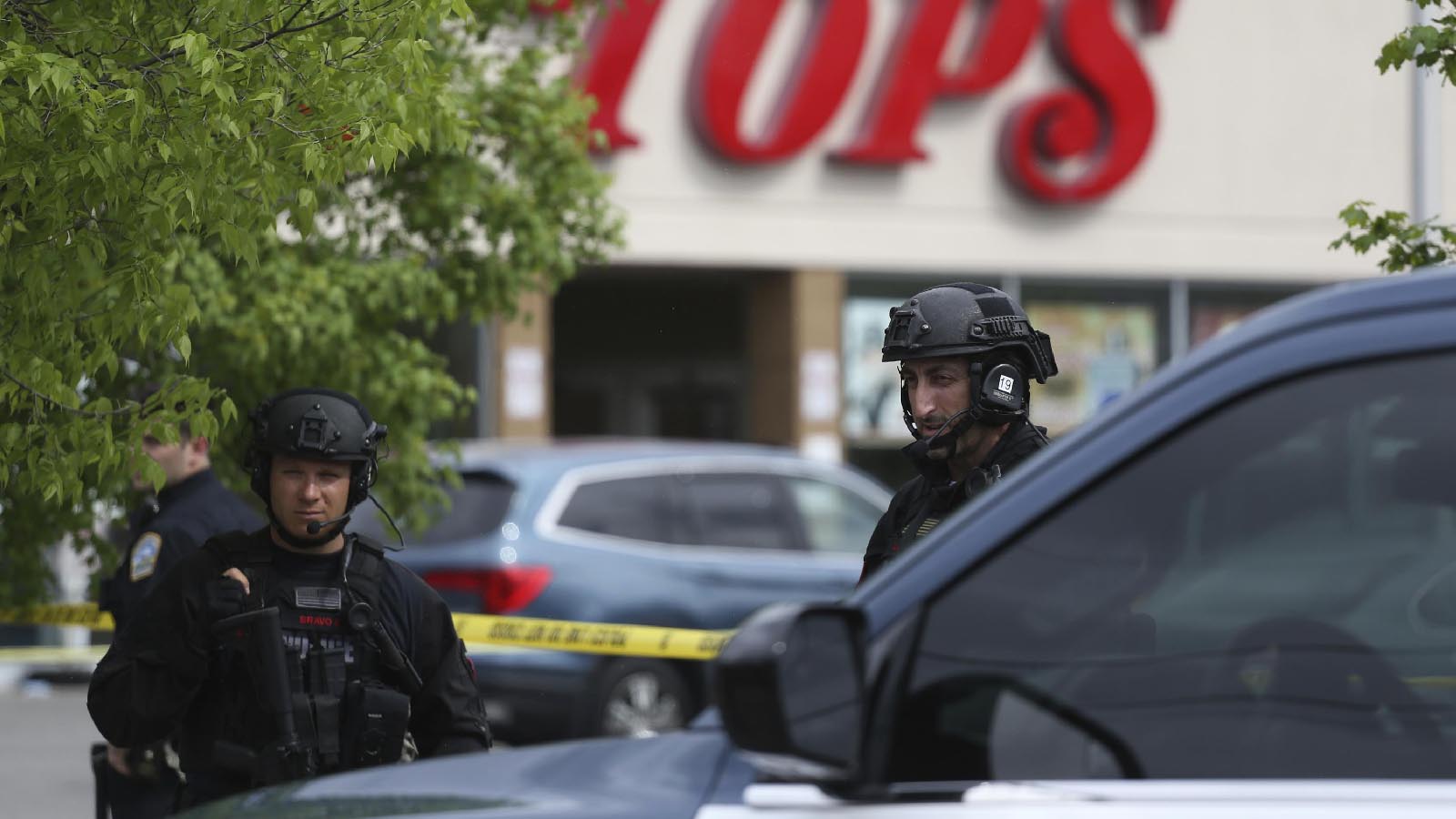 We reported earlier on the horrible shooting in Buffalo, in which 13 were shot.

The authorities held a press conference.

According to the police commissioner, the shooter was a white, 18-year-old male. He was dressed in tactical gear, with body armor and a rifle. He had traveled hours before he arrived at the Tops Market location. The shooter was also live-streaming during the attack.

He shot four people outside of the store, three of whom were killed. He then began shooting people inside the store. He was confronted by a security guard who shot him, but because the suspect was wearing armor, that didn’t stop him. The security guard, a former Buffalo police officer, was killed in the exchange of fire. The suspect held a gun to his own neck, but the police talked him out of shooting himself then took him into custody.

Authorities said they believed there was a racial component to the shooting, and the FBI is investigating it as a hate crime.

From BPD: 11 of the victims were black, two were white.

DA John Flynn says there are also pieces of evidence which shows this was a racially motivated shooting, but would not go into detail. https://t.co/zSg6NB5hTH

The AP has confirmed with law enforcement that the suspect’s name is Payton Gendron.

He allegedly had a manifesto, which some reports are citing, that has racist and anti-Semitic rants in it, but that has not yet been confirmed by authorities as belonging to him.

Now, at a time when this just happened, you would think there should be a focus on the victims and figuring out the facts. Or calling out the evil nature of the act. But that hasn’t stopped some vile folks on the left-and those in bed with them-from already trying to attack people on the right and specifically, Tucker Carlson, somehow blaming him for the actions of this man.

More blood on the hands of @tuckercarlson and @foxnews this killer used their racist talking points to justify killing 10 people. Carlson won't stop because as he explained to the NYTimes, it's good for ratings. Lives be damned. As Carlson will be at judgement day. https://t.co/fse5bRvEbN

The Buffalo killer’s manifesto reads like a job application for a junior producer on Tucker Carlson.

And no, I’m not being flippant.

This is vile and they should be ashamed of themselves, if they had any souls to feel shame with anymore. This has nothing to do with Tucker Carlson. The manifesto hasn’t even been confirmed yet, and it doesn’t have anything about Carlson in it, as far as I can tell. They’re so anxious to attack, they can’t even wait until it’s confirmed to spread their nonsense.

Indeed, there’s reportedly an anti-Semitic meme that attacks Fox in the alleged manifesto. So, people trying to blame Fox, based on the manifesto, apparently haven’t even checked it.

The guy expressed his hatred of Fox News in his manifesto. Maybe he watches CNN? If that's so, that means the blood is on your hands, right Joey? https://t.co/D0KcrGJIG9

Further in the manifesto, the person who wrote that manifesto claims that he considered himself a communist but has since moved further right to be a “mild-moderate authoritarian left category.”

But hey, why wait for facts? The left never cared about facts in the past, why would they begin caring now? They don’t care about the tragedy and the people who died–except how they can use it to attack their political enemies, and that is despicable.