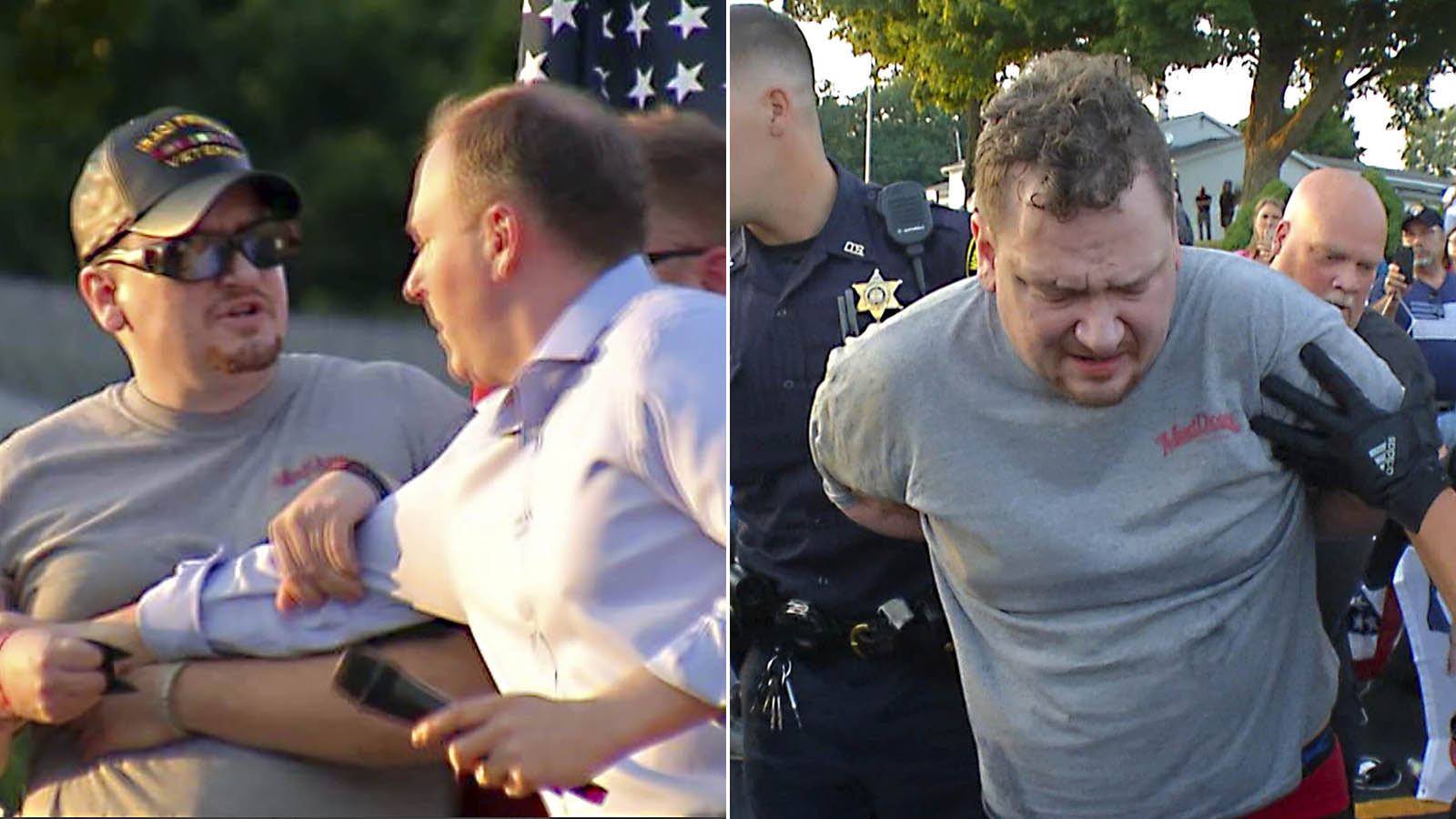 The troubled Army veteran who allegedly attacked US Rep. Lee Zeldin during a gubernatorial campaign stop near Rochester was hit with a federal assault charge Saturday, authorities revealed.

David Jakubonis “willfully” assaulted the congressman and Republican candidate for governor of New York “with a dangerous weapon” in Perinton on Thursday evening, an FBI agent alleged in a criminal complaint filed in United States District Court. Zeldin, 42, was unhurt.

Jakubonis allegedly violated a federal law against intentionally assaulting a federal lawmaker or member of the Executive Branch, according to the six-page affidavit written by Special Agent Timothy Klapec.

Jakubonis claimed to sheriff’s office investigators he “did not know” who Zeldin was, and that he “must have checked out,” but the federal statute doesn’t require the prosecution to prove that a suspect is aware of a victim’s position to charge someone under that law. Jakubonis also told investigators that he had drunk whiskey on Thursday, according to the affidavit.

The suspect, who was released from jail hours after the incident, appeared in front of US Magistrate Judge Marian W. Payson on Saturday, according to the complaint, and was being held behind bars following the proceeding, according to a worker at the federal court in Rochester.

Jakubonis, 43, is due back in federal court Wednesday morning, the Department of Justice said. His lawyer declined to comment.

Zeldin, who is also a military veteran, expressed gratitude about the new charge.

“I’m thankful that federal authorities came in to do what New York State’s broken pro-criminal justice system could not – uphold the rule of law,” he said in a prepared statement.

Earlier, a group of FBI, New York State police and the Monroe County Sheriff’s Office personnel took him into custody, the Daily Mail reported. A six-vehicle motorcade entered Jakubonis’ apartment complex before 12 p.m, and shortly after departed with the suspect in custody, according to the outlet.

Zeldin — the Republican nominee for New York governor who currently represents eastern Long Island in the House of Representatives — was allegedly assaulted with a bizarre weapon during a campaign stop in Monroe County.

Jakubonis — who is accused of swinging “a set of self-defense knuckles which had two sharp pointed ends” at Zeldin’s throat after saying, “You’re done” — was previously charged by local law enforcement with attempted second-degree assault.

The weapon used appears to be a $10 plastic keychain fob that looks like a cartoon cat’s head and is marketed for “self-defense.”

After a short tussle between the suspect and Zeldin, combat veteran and witness Joe Chenelly tackled Jakubonis to the ground. The incident was caught on video.

Jakubonis “was in a bad place,” Chenelly, a state Assembly candidate, told The Post on Saturday, speculating that the accused was either intoxicated or in “mental distress.”

He expressed relief that Jakubonis was in custody, and vowed to connect him with resources available to former service members.

“At least we know where he is,” said Chenelly, National Executive Director of veterans’ organization AMVETS. “At least we know he is in a safe spot right now. We have been concerned about his personal safety.”

On Friday, legal experts told The Post that Jakubonis‘ actions warranted a more serious charge, such as first-degree assault, that could have led to him being held on bail. Monroe County District Attorney Sandra Doorley is recusing herself from the case because she serves as a co-chair of Zeldin’s campaign committee, a rep for the prosecutor said.

Ex-New York City Mayor Rudy Giuliani agreed that Zeldin’s alleged attacker was undercharged immediately after his storming of the stage.

“It’s really an indication of the complete dysfunction of our criminal justice system under crime wave Hochul,” the former federal prosecutor told The Post on Saturday.

We cannot live in a state where someone who commits a felony trying to stab me on stage at a campaign rally then gets immediately released. New York’s cashless bail law must be REPEALED!  Kathy Hochul refuses to get this job done. I will! pic.twitter.com/QUhwIiYyov

Meanwhile, Zeldin shared The Post’s front-page about the ordeal, claiming Jakubonis’ being let out is a prime example of the consequences of progressive pre-trial policies enacted in 2019.

“We cannot live in a state where someone who commits a felony trying to stab me on stage at a campaign rally then gets immediately released,” he seethed on Twitter. “New York’s cashless bail law must be REPEALED! Kathy Hochul refuses to get this job done. I will!”

“My team has informed me about the incident at Lee Zeldin’s campaign event tonight. Relieved to hear that Congressman Zeldin was not injured and that the suspect is in custody,” the governor had tweeted. “I condemn this violent behavior in the strongest terms possible — it has no place in New York.”

Zeldin subsequently opted to boost his security at campaign events.

“We have multiple rallies and other events today and tomorrow and Sunday. From our first event in Seneca County, our last event in Onondaga County and through the rest of this campaign, there’s going to be increased security,” the congressman said during a campaign stop in Watertown on Friday.

Jakubonis — a graduate of the Rochester Institute of Technology — experienced a “rapid decline” in his mental health in the wake of the death of his wife and medical discharge from the Army in 2012, a former neighbor told The Post on Friday.

The Fairport resident was struggling with alcoholism and anxiety, he told the New York Times.

The newspaper also reported that Jakubonis wasn’t aware that Zeldin was a congressman or that he was a gubernatorial contender, and that he had “fallen ‘asleep within’ himself” Thursday night.

The Army vet — who has been “actively seeking employment” since 2015, according to a LinkedIn profile in his name — is due back in court on Aug. 30 for the state-level charge.

During his military career, he racked up a dozen medals, including a Bronze Star, Army Commendation and two Army Achievement medals, as well as one for Good Conduct and the National Defense Service medal.

Additionally, Army Pfc. David G. Jakubonis was identified in a 2009 article as being mobilized and activated for deployment overseas during Operation Iraqi Freedom.