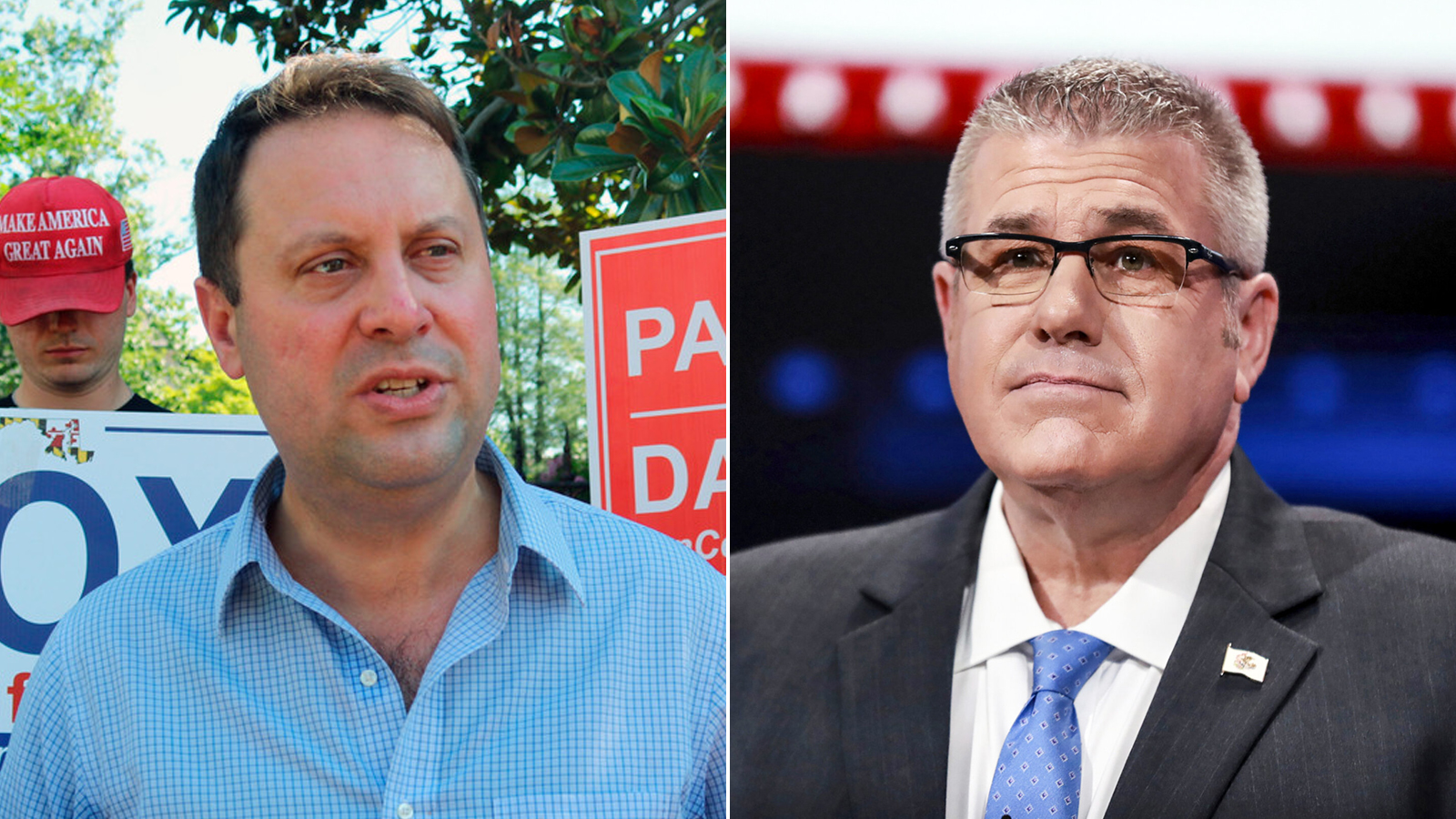 Democratic-aligned groups and candidates have spent tens of millions of dollars to influence GOP primaries across the country this year, hoping that their efforts will yield less-electable, more-controversial Republican nominees in the general elections.

And while those efforts appear to be paying off in some states, they’ve also stirred concern among some Democrats that these tactics run the risk of helping elect far-right candidates to high-level public offices, especially in a political environment that is largely working against Democrats.

Here’s a look at some of the GOP candidates that Democrats have helped in this year’s primaries.

The Republican primary for Maryland governor amounted to a high-profile proxy war between two competing GOP heavyweights: Donald Trump and outgoing Gov. Larry Hogan, a rare Republican critic of the former president who won the governor’s mansion twice in a blue state.

Hogan endorsed former state Commerce Secretary Kelly Schulz in the race, while Trump backed Dan Cox, a right-wing state delegate who aggressively challenged Hogan’s approach to the COVID-19 pandemic and helped organize buses for protesters to attend the “Stop the Steal” rally in Washington that preceded the Jan. 6, 2021, riot at the U.S. Capitol.

Cox ultimately won the nomination this week, and he got some help from an unusual source: the Democratic Governors Association (DGA).

The DGA spent more than $1.16 million on television ads highlighting Trump’s endorsement of Cox and the first-term state delegate’s loyalty to the former president. That message ultimately helped boost Cox to victory, as the GOP’s conservative base flocked to support Trump’s hand-picked candidate.

On Friday, three days after Maryland’s July 19 primaries, multiple networks projected nonprofit executive Wes Moore to be the winner of the Democratic nominating contest for governor. (The Associated Press has yet to call the race, and the campaign of Moore’s primary opponent Tom Perez has said it’s too early to make the call.) In boosting Cox in the GOP primary, Democrats are hoping to better their chances of flipping the governor’s mansion in November, believing that a Trump loyalist will ultimately prove too divisive to win a statewide general election in a blue state.

Seeking to smooth incumbent Gov. J.B. Pritzker’s path to a second term in the governor’s mansion, Democrats also spent heavily to influence the GOP primary in favor of Darren Bailey, a right-wing state senator who once introduced a bill to split Chicago and the rest of Illinois into two different states.

Bailey, who was also endorsed by Trump, faced five other Republicans in the June 28 primary, including Aurora Mayor Richard Irvin, a more moderate candidate who had the backing of billionaire Ken Griffin.

But as polling leading up to primary day showed Irvin ahead of Bailey for the nomination, Pritzker and the DGA spent heavily in an attempt to talk up Bailey’s pro-Trump credentials and weaken Irvin.

With Bailey as the Republican nominee, Pritzker appears much more likely to win a second term in November.

Biden carried the state by roughly 17 points in 2020, and while a candidate like Irvin may have been able to court independents and some moderates in the general election, it’ll be much harder for Bailey to win over the broad support he’ll need to flip the governor’s mansion.

The primary match-up is in essence a proxy war between competing factions of the GOP, making it particularly tempting for Democrats to weigh in.

In recent weeks, Democrats have more aggressively sought to boost Lake and weaken Robson, hoping that, if Lake wins the nomination on Aug. 2, she’ll ease Democrats’ path to victory in a state that has become increasingly competitive in recent years.

One recent email from the state Democratic Party, for instance, thanked Robson for past donations to Democratic candidates. And while the DGA hasn’t spent in the primary as it has in other GOP races, it’s been clear in labeling her a “MAGA” Republican in hopes of solidifying her support among Trump’s conservative base.

While Democrats are betting that a more moderate candidate like Robson will be harder to beat in November, Lake could stand a better chance of winning than a Trump-backed candidate in a place like Illinois or Maryland. Arizona may be a battleground now, but in a tough year for Democrats, it could swing back toward the GOP.

Pennsylvania state Attorney General Josh Shapiro, the Democratic nominee for governor, didn’t face any opposition in his primary. But that didn’t stop his campaign spending heavily — only it was in the GOP primary.

Shapiro spent nearly $1 million during the primary highlighting Mastriano’s views, including his support for Trump and belief that the 2020 election was stolen from the former president. In all, that’s more than twice what Mastriano’s campaign spent on its own advertising.

Mastriano went on to capture the GOP nomination easily, defeating a more-moderate rival, former Rep. Lou Barletta (R-Pa.) by a more than 23-point margin. The strategy was clear: Democrats, and even many Republicans, saw Mastriano as unelectable. In nominating him, their thinking went, Shapiro would have a straight shot to victory in November.

In fact, there are signs that the general election match-up between Shapiro and Mastriano may be more competitive than Democrats had hoped. Recent polling shows Mastriano trailing Shapiro by only a few percentage points — often within the margin of error.

For now, the race still appears to favor Shapiro. The Cook Political Report, a nonpartisan election handicapper, rates the contest as “lean” Democratic. Still, Pennsylvania is a perennial battleground and with the political environment still looking bleak for Democrats, Mastriano could still have a chance.