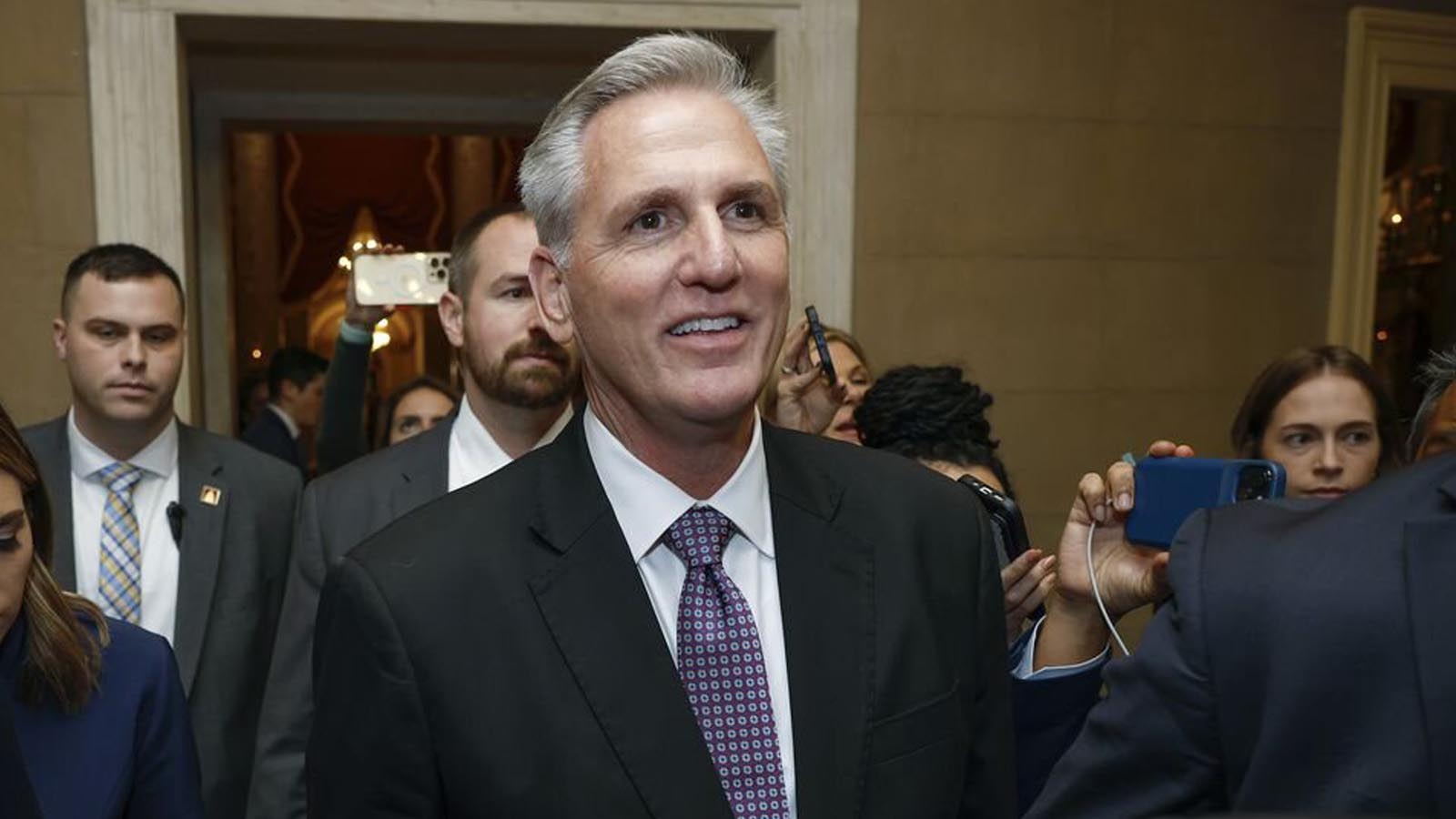 Rep. Kevin McCarthy (R-Calif.) made significant gains in his bid to become the next House Speaker on Friday after a deal with his detractors swung 14 votes in his favor.

It’s not enough to make McCarthy the Speaker, as he needs a majority of those present. But his 214 votes on the 12th ballot fell just three shy of the number needed to seize the gavel, and it marked the first time this week that he bested the Democratic leader, Rep. Hakeem Jeffries (N.Y.), who had led every previous ballot.

Jeffries received 211 votes, reflecting one Democratic absence. The seven Republicans who maintained their opposition to McCarthy split their votes between two of their GOP colleagues. Two additional Republicans were absent during Friday’s vote.

It’s not clear if McCarthy can win over his final opponents. But it does represent real progress for the embattled Speaker-in-waiting after a difficult and historic week in which 20 Republicans repeatedly blocked his path.

Here are the Republicans who switched sides.

Bishop was the first of the group of 20 to switch sides by virtue of the alphabet. Republicans backing McCarthy rose and gave him a loud ovation after he announced on the floor his vote for McCarthy, on the 12th ballot.

Applause from McCarthy supporters also followed the announcements by Brecheen, Cloud and Clyde as they announced their support for McCarthy.

Donalds, in just his second term in Congress, was thrown into the spotlight this week when he became the first McCarthy supporter to switch to the opposition, in the third ballot, and was later nominated by the detractors to challenge McCarthy directly.

Yet Donalds spent most of Thursday playing a central part of the talks with McCarthy’s allies. In the 12th ballot as the votes changed, he was not nominated against McCarthy.

Gosar voted for McCarthy on Friday.

Harris did not vote for McCarthy on the first 12 ballots, but he switched his vote to McCarthy on the thirteenth ballot. Shortly afterwards, he explained his reasoning in a tweet.

“Washington and Congress are broken,” he said. “If the agreement we were able to finalize over the last few days is implemented, it will be the greatest change in how the House operates and becomes much more responsive to the American people in a least two generations.”

Luna, who has been an adamant opponent of McCarthy, told reporters Thursday night that talks in Emmer’s office had been “all net positive.”

That was one day after she issued a statement saying “I did not come to Congress to conduct business as usual or bow to the notion that this is just ‘how things are done in D.C.’”

“I have made my position clear, and it remains the same as when you elected me: I will stand strong until we get a Speaker who will fight for the American people and fix the chaos and corruption in our nation’s Capitol,” she added. “I will continue to stand firm against all forms of pressure.”

Miller also said she would back McCarthy based on pending talks.

Norman, another Freedom Caucus member, backed McCarthy on the floor.

Earlier he had said he was still reviewing the details of the agreement. But during an appearance on Fox News Friday morning, he said the deal includes “commonsense proposals” he and others put forward weeks ago.

“We’ll be looking at it, seeing if it’s enforceable, seeing if it’s something that will — will make — it — all of it makes sense, and we’re excited about having these changes made which should have, should have been done anyway,” he said. “We shouldn’t have to ask for them.”

Asked Thursday if he could ever change from voting for people other than McCarthy, Ogles said: “We’ll see.”

On Friday, he voted for the California Republican.

Perry has been one of the most vociferous opponents of McCarthy with his statements in recent weeks. On Friday, he backed him on the floor.

Perry had spent long hours in the negotiations, and had expressed sharp reservations with McCarthy that have to do more with personal distrust than with anything more tangible that McCarthy might be able to provide.

“We’re at a Reagan moment — ‘trust but verify,’” Perry tweeted Thursday night. “The devil is in the details, and we’ll take our time to ensure it’s right, not easy. One way or another, the status quo must go.”

But on Friday, his vote moved McCarthy a little closer to his goal.

Roy, former chief of staff to Sen. Ted Cruz (R-Texas), has been at the forefront of the negotiations with McCarthy’s allies and once the deal was close, he was expected to back McCarthy.

Roy, more than most of the detractors, has been consistent in his specific demands, which center around assurances that all legislation — particularly government spending bills — receive a robust debate and a separate floor vote.

If a deal emerges, it will be because Roy has endorsed it.

“We’re still talking. … I can’t speak to where the numbers are,” Roy said Friday just before noon. “[We’ve] had the guts of something that I believe in for a number of days. But you’ve got to get it all kind of worked out and work with the various interests in the conference.”

“We are making progress,” the lawmaker-elect said, before naming McCarthy as his choice for Speaker.

Biggs, a former chair of the far-right Freedom Caucus, was among the earliest — and loudest — critics of McCarthy, challenging the long-time Republican leader for the Speaker’s spot in the GOP’s closed-door nomination vote in November, and then again on the House floor this week.

Boebert, a member of the conservative Freedom Caucus, told Fox News’s Sean Hannity Wednesday night that she will not support McCarthy — even after former President Trump, of whom she is a close ally, urged the conference to do so.

“I’m not going to support Kevin McCarthy, Sean,” she told the television host.

While those comments were made before House Republicans announced their tentative deal, Boebert told reporters Thursday night, “I am not a part of any negotiation.”

Asked Thursday if there is anything McCarthy can do to win his support, Rep.-elect Eli Crane (R-Ariz.) said: “I don’t think so.”

Gaetz, who has expressed opposition to McCarthy since the internal GOP election in November, told reporters Thursday night that he is not supportive of the tentative deal.

“That’s correct,” he said, clarifying his continued opposition to McCarthy after being briefed on the new terms. Pressed on what his issues are with the deal, he responded, “It results in Kevin McCarthy becoming the Speaker.”

Good, another McCarthy opponent from the start, told reporters Thursday that he will never vote for McCarthy.

Rosendale voted for Rep. Kevin Hern (R-Okla.) on Friday, though he at first offered a tease.